LESSON #1: BE CAREFUL WITH OPEN INTERPRETATION— Had I written this column last week, this first lesson would have be titled “We’re Not Ready for Joker.” I saw all the lead-up buzz, all the fearful theories, and all the wild labels and had to turn it off. I wanted to stop and see the movie before adding more guesswork. After seeing it, I hunkered down in my review to stick to the film as much as possible and I’m glad I did. Too many reviews I’m seeing are diving straight to commentary interpretation and not to the critique of what’s on screen. That’s feeding the buzz monster in my opinion. That’s making a review about theory and not evidence. World of Reel nailed this by saying the hoopla can become the media’s fault and not the movie. Worse, those writers lock that opinion in my-opinion-is-the-only-opinion-that-matters cement and throw the openness of interpretation out the window. Including personal takes in a review is fine, but it can’t be the whole thing and it has to be flexible for discussion or be able to acknowledge other opinions are possible. Be careful, critics (and all fans for that matter). Know that you’re stepping out there for judgment when you go about it with a closed mind to accepting other opinions.

P.S.– Since we’re talking about Joker, here’s my extra plea to #FilmTwitter: 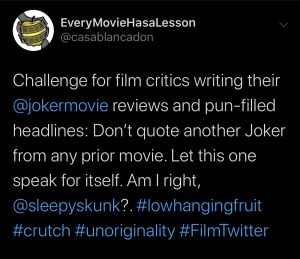 LESSON #2: MARTIN SCORSESE IS OUT OF TOUCH— Storied director and historical film connoisseur Martin Scorese isn’t a fan of comic book movies. Normally, that’s a “to each their own” place, but he went further to say they are are not cinema. More specifically, his damning line in an Empire interview was “It isn’t the cinema of human beings trying to convey emotional, psychological experiences to another human being.” Dammit, Marty. I love you and I’m not supposed to use this word, but you’re “wrong.” See Lesson #1 about open interpretation. Try telling that to all of us blubbering in our popcorn during the MCU’s most dramatic moments or being inspired to be better people watching Christopher Reeve or Gal Gadot. Sorry, Mr. Scorsese, but you’re out of touch. If you don’t believe all of us fans, Marty, take the word of peers.  I think Joss Whedon and James Gunn said it best on Twitter: 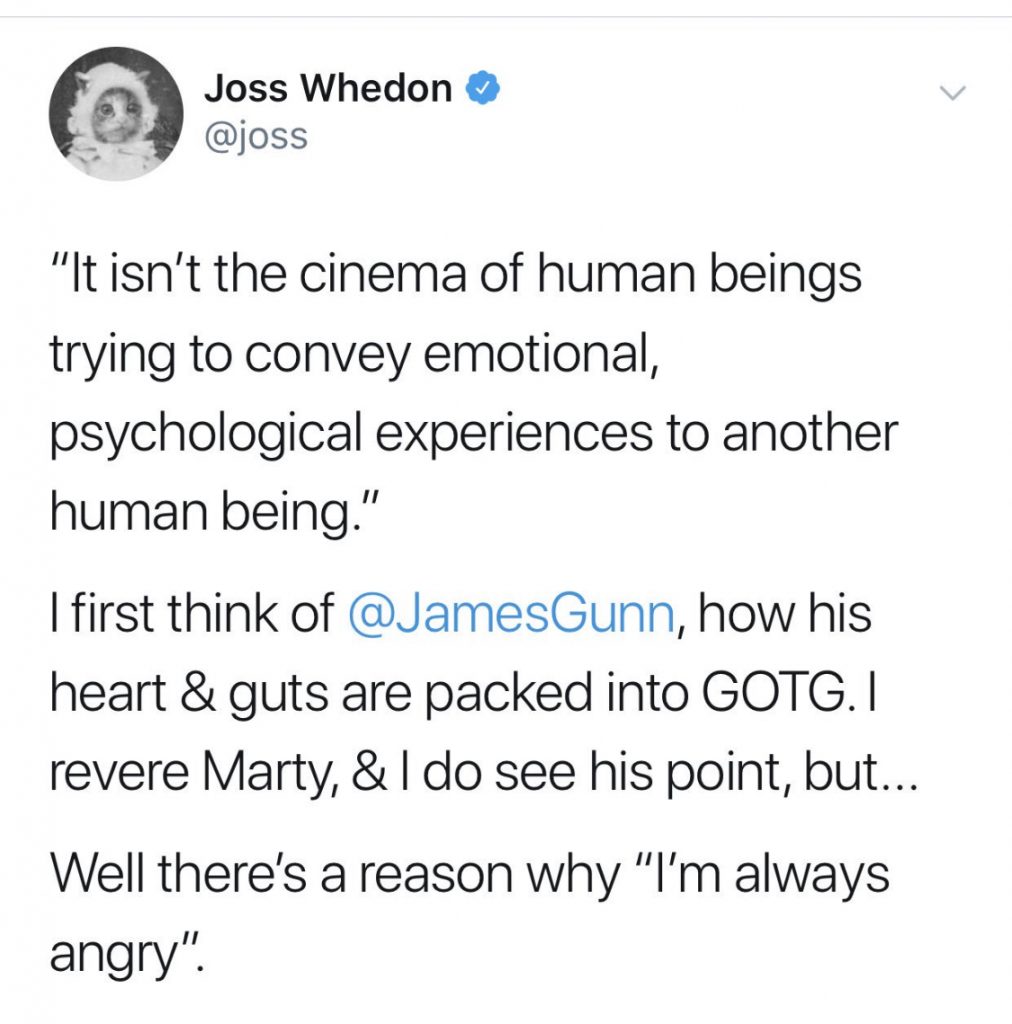 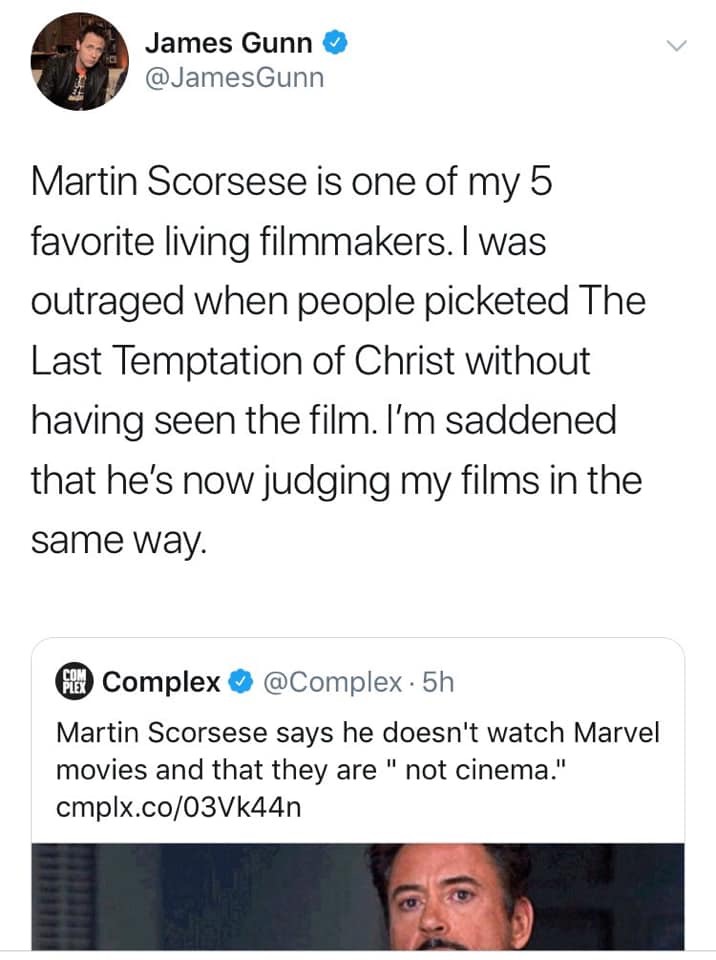 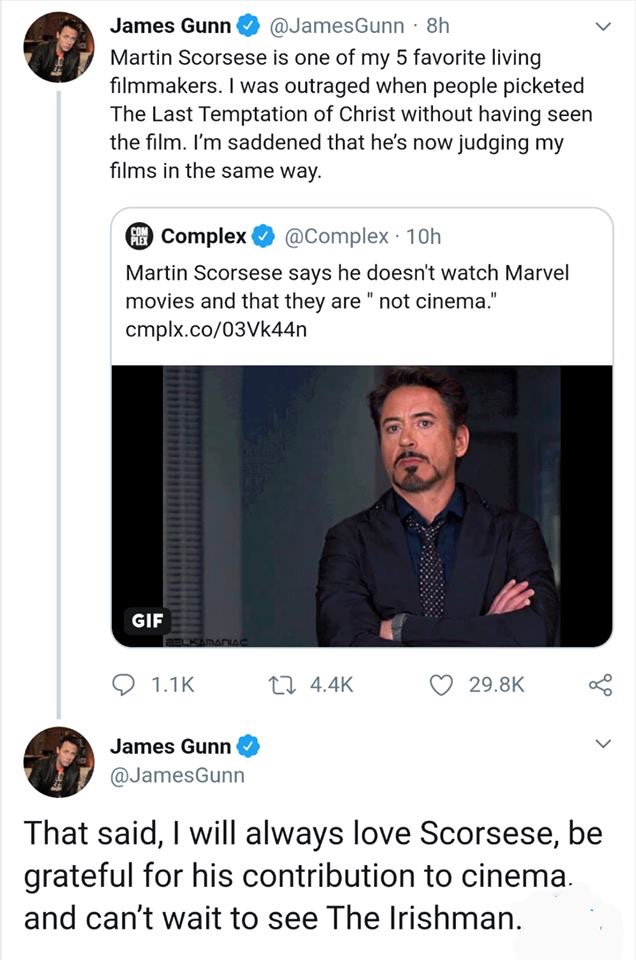 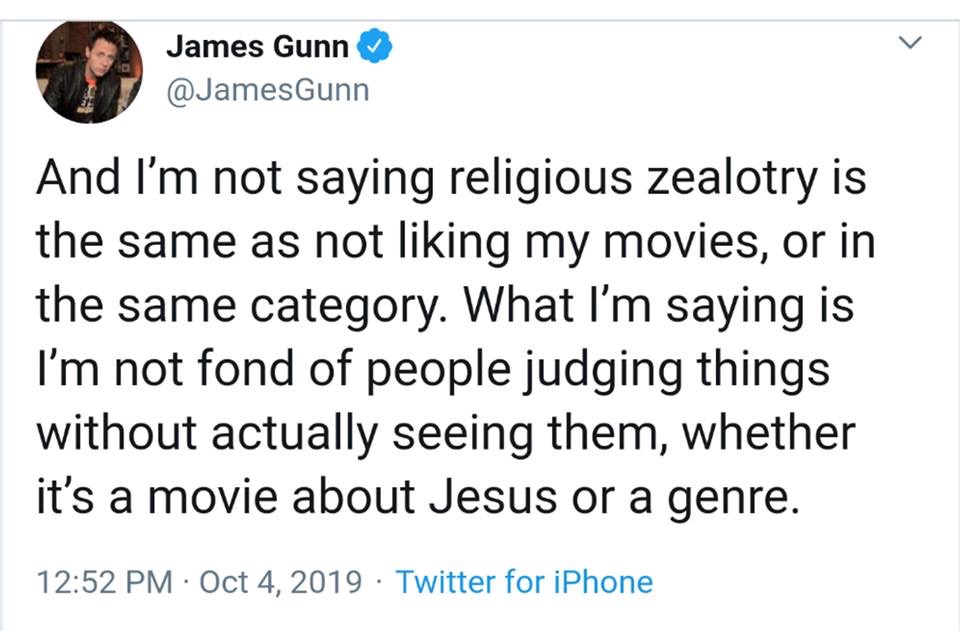 LESSON #3: WE DESERVE MORE G-RATED MOVIES— I love this article from The Sydney Morning Herald shared in the Feelin’ Film Facebook group (shout out to Caless Davis) on Friday. Family-friendly films on this entry rating level are an endangered species. It’s fair that modern progressive times have created more thematic infusion of heavier themes, but we cannot abandon the base and entry level. We need to demand more all-ages offerings and use our attendance to see that they become successful enough for more to be made.

LESSON #4: HAND-DRAWN ANIMATION AT THE HIGHEST LEVEL HAS A CHANCE— Speaking of G-rated movies, Walt Disney Animation’s newly installed president (and film director) Jennifer Lee was asked what changes could be coming during her regime.  One of the possibilities was a return to hand-drawn animation.  “Being open” is good enough where we can put the Lloyd Christmas GIFs to good use.  The hope is music to my ears and what a treat a traditional animated film would be!

DON SHANAHAN is a Chicago-based and Rotten Tomatoes-approved film critic writing on his website Every Movie Has a Lesson. His movie review work is also published on 25YL (25 Years Later) and also on Medium.com for the MovieTime Guru publication.  As an educator by day, Don writes his movie reviews with life lessons in mind, from the serious to the farcical. He is a proud director and one of the founders of the Chicago Independent Film Critics Circle and a member of the nationally-recognized Online Film Critics Society.  As a contributor here on Feelin’ Film now for over two years, he’s going to expand those lessons to current movie news and trends while chipping in with guest spots and co-hosting duties, including the previous “Connecting with Classics” podcasts.  Find “Every Movie Has a Lesson” on Facebook, Twitter, and Medium to follow his work.  (#117)