LESSON #1: DEAR CHRISTIAN FILM COMPANIES AND DISTRIBUTORS, SPREAD YOUR RELEASE SCHEDULE OUT— Don’t get me wrong.  I get it.  Easter might as well be Christmas: Part II, the Super Bowl, and WrestleMania when it comes to public awareness on all things Christianity.  Just because all eyes are on the “reason for the season” (if they can put down the eggs, bunnies, and candy) doesn’t mean that Easter should be the most stacked weekend of the calendar year for Christian-themed films.  The presence of I Can Only Imagine, Paul Apostle of Christ, and God is Not Dead: A Light in the Darkness makes for three films competing for your Easter weekend dollars against the inviting mainstream fare like Ready Player One.  Spielberg’s film is going to get its money, but your films have a hard enough time making money (as well as other problems) as it is to have to now compete with each other.  Share the wealth, space your calendar out, and that means more than the two-week head start I Can Only Imagine gave itself to great success.  The calendar is full of holidays.  Pick another couple go-to weekends and fallbacks other than Easter.

LESSON #2: STEVEN SPIELBERG STILL HAS THE MAGIC— As heard on this week’s main Feelin’ Film podcast and read in my own review on Every Movie Has a Lesson (among many others) as well, Ready Player One feels like a tremendous return to form for the 71-year-old director who has spent the better part of the last decade making safe and tidy historical Social Studies lectures on film.  Cinema has sorely lacked the full power of his signature sense of wonder after mere glimpses in films like War Horse, Lincoln, and others.  Cue the WWE chant!

LESSON #3: STEVEN SPIELBERG NEVER LOST THE MAGIC— No matter the moral history preaching that went on, Steven Spielberg never lost his technical prowess within the medium.  If anything his more reserved and refined projects sharpened it and modernized it to be ready for something like Ready Player One.  The craftsman-level maturity he and his frequent collaborators (editor Michael Kahn, cinematographer Janusz Kaminski, ILM guru Dennis Muren, and others) bring to a project like Ready Player One elevate the material and prevent what would be over-amplified noise and lazy fluff in lesser hands (yeah, I mean you Michael Bay and Tim Burton).  Rediscovered mojo or not, he never lost the talent.

LESSON #4: STEVEN SPIELBERG STILL LOST OTHER THINGS— Where Steven Spielberg might be slipping is with his rhetoric.  While doing press this week for his blockbuster’s big release, he commented that Netflix films shouldn’t qualify for Oscars, equating the streaming platform to a television outlet, making the filmmaker appear to be a little out of touch with the evolved marketplace film viewers operate within nowadays.  If you go to the official rulebook from the Academy, here’s the basics of what it takes for Best Picture eligibility: 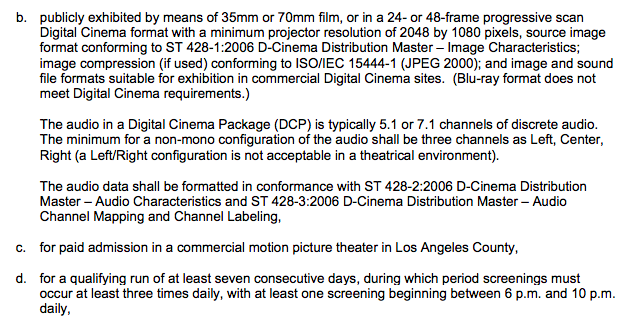 I’ll grant the kicker of the Part D listed above as deal-breaker in my book to match Spielberg’s opinion.  Here’s the thing, Netflix has previously and does currently release some of its films in theaters for limited runs.  The trouble is, for the most part, their theatrical drops are a blip on the radar and the bare minimum similar to the “one-and-done” trend happening in NCAA Men’s Basketball with holding players in college for a year before making the leap straight to the NBA.  Neither practice really does much good and just delays the inevitable profitability (NBA money or Netflix reach) but, if the rule is followed eligibility is met, plain and simple.  This year’s prestigious Cannes Film Festival is already displaying an anti-Netflix power move by banning Netflix Original films from competing without a theatrical release.  I’ve said this before on other topics.  It’s all about price point, earning potential, and this being a business first now.  If a studio can make more money selling to Netflix (just ask Paramount with Annihilation) than it would the cost of printing it, marketing it, and putting it in limited theaters, I sure couldn’t tell them not to.

LESSON #5: “META” CAN’T GET WEIRDER THAN SHIA LEBOUF— In WTF news that could only come out of Hollywood, word hit the wire that Shia LeBeouf, at the young age of 31, has written (under a pseudonym) his own film autobiography and the casting has raised an eyebrow.  Signing Manchester by the Sea Oscar nominee Lucas Hedges to play the young Shia is a nice get, but what gets really weird is that LeBeouf himself will play his own father.  Yowzers!  Even if Shia is a dead ringer for his own father, I don’t know how big the grain of salt has to be to suspend the disbelief that the Shia you’re watching acting next to the other dude playing Shia isn’t the real Shia you see and recognize but his dad instead?!  That’s not going to be a good look for the continually growing deep end you’ve been leaping from, Mr. LeBeouf.  Dude, either play yourself (because you can) for the vanity or get another actor to separate the work behind-the-camera from the one on-camera.

LESSON #6: MORE OFTEN THAN NOT, NUDITY IS AN UNNECESSARY DISTRACTION IN MOVIES— As the former horndog pre-teen/teen who had no problem sneaking through his local video store to rent some Shannon Tweed Skin-a-max films back in the day, this lesson might be the most mature realization I’ve ever grown up to admit the truth on.  Get out the #adulting hashtag.  Jessica Chastain got herself a headline this week talking about nudity in film.  No stranger herself to nudity, the acclaimed actress made excellent points on discomfort, victimization, and whether the nudity in question matches what the characters themselves would really do.  The word “gratuitous” was never used by Chastain, but most of us adults can quickly label nudity in a movie (female and male, mind you) with that word pretty quickly.  She brings up valid points and I tip my hat with respect that someone wants to talk about it, especially during this #MeToo era.