Despite not loving “Jurassic World: Fallen Kingdom”, we were fascinated by the potential stories that could be told in the world it setup. We also just love seeing gigantic, loud CGI dinosaurs, so of course we’re always going to check out a new film in this franchise. Hear us talk out our complicated feelings about how this series comes to a close (at least for now).

To celebrate the upcoming new Jack Ryan series on Amazon, we decided to cover one of the character’s films. Our donors voted and overwhelmingly chose The Hunt For Red October, and we are so glad they did. 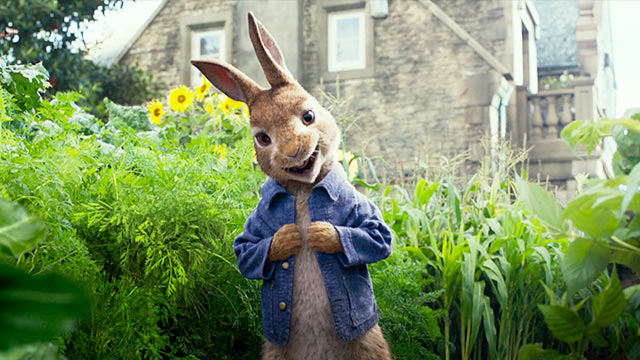 Oh, January. According to Box Office Mojo, there is exactly one animated film among the Top 100 grossing of all-time to release in what is widely considered the dumping ground month for film studios. Extend that to the Top 200 and you find only three films released in January. Let’s just say this doesn’t provide a huge amount of confidence in Peter Rabbit‘s breakout potential. That being said, despite my little to no interest in this live-action/CGI animated adventure, Columbia Pictures does have a history of putting out some solid animated films (Arthur Christmas, Cloudy With a Chance of Meatballs, Open Season, and the Hotel Transylvania series). I also had little to no interest in another live-action/CGI film this January. That movie, Paddington 2, shocked me by being utterly fantastic. And so, Peter Rabbit. Here’s hoping for a hopping good time, but expecting nothing close.

Early in the film, a narrator voice-over tells us that Peter Rabbit is “the tale of a rabbit in a blue coat with no pants.” That simple description may be true, but much like the film’s trailers, it says nothing about the emotional depth to be found within. Sure, the movie about talking animals battling with a human over control of a garden is funny as it should be, but it’s also got a lot of heart, and that is what elevates this one from good to to great.

Will Gluck’s writing in the film is wonderful. At first, the reckless and prideful Peter (James Corden) appears to just want supremacy of the garden from Mr. McGregor (Domhnall Gleeson). After all, despite it being a great source of food, couldn’t the rabbits move to somewhere less populated and with more accessible sustenance that wasn’t littered with traps? But as the story progresses, Peter’s underlying motivations are slowly revealed to be more emotionally driven, and his relationships with his family and local animal loving neighbor Bea (Rose Byrne) grow into ones that have some genuine depth. The film also uses its entertaining battles between rabbit and man to make a great point about bullying and the escalating violence it can cause. It’s not all feels, though. The humor Gluck weaves throughout the narrative comes in many different forms. There is social commentary (brief jabs are taken at electronic device addiction and the growing trend of everyone being allergic to something), fourth-wall breaking, and some great meta moments. All of the jokes feel smart and current in a way that’s different from typical American animation. Maybe I’m just a sucker for British wit, but if you are too then you’ll love what Gluck has done with this script.

The music in the film also is a major positive. It’s musical choices work great and a running gag with some singing birds definitely is a highlight. Visually, the film looks great. Colors are crisp and bright. The rabbits look appear appropriately cuddly. The interaction between live-action and CGI is fantastic, too, with Gleeson and Byrne both doing a great job of selling that they’re really communicating with talking animals. Gleeson in particular is a joy to watch and I’ve decided this type of role is where he shines most. He’s easy to hate while at the same time giving you enough charm that you feel like there’s something there to love, which is exactly what was needed for Mr. McGregor. Both he and Byrne seem to really be enjoying their roles an having a ball.

This all isn’t to say that the film doesn’t have issues. Structurally it hops around at times and is a little bit of a mess. And even though there is an attempt to round out Peter’s family with unique personalities, there’s just not enough time to develop them in a deeply meaningful way. Peter Rabbit also isn’t particularly memorable. While the emotional beats work while watching they aren’t something you’ll be considering for hours and days afterward. Still, these and other minor quibbles aside, the film is just so much fun that it overcomes them and results in a very entertaining experience.

Peter Rabbit isn’t by any means a perfect film. But like Paddington 2, when compared to non-Pixar/Disney American animation it really shows that there is an amazing alternative in animated comedy for audiences to focus on and celebrate. This is a film that is short, sweet and smart with some great messages about family and friendship all while being one of the most laugh out loud hilarious experiences I’ve had in a theater in ages. Its choice to go deeper than the surface by touching on themes of owning up to mistakes and forgiveness turn it into more than just a funny action adventure, and instead make it one of the better animated films to ever be released in January. Grab your blue jackets and take the family to this fun romp through the garden!

We kick off book-to-movie month with arguably the best summer blockbuster ever made. Jurassic Park is one of those special films that evokes such a sense of awe and wonder that it captures the imaginations of adults and children alike. We talk through some of the present themes and reminisce about our own experiences with this Steven Spielberg masterpiece.