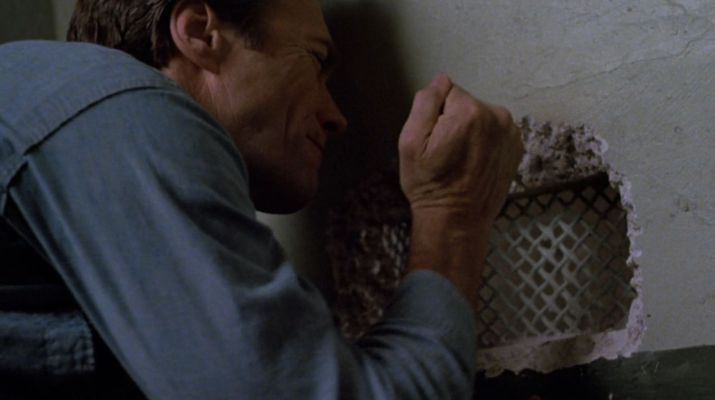 “I may have found a way out of here.” – Frank Morris

Aspiring writer Richard Tuggle had painstakingly researched and adapted a script about the only potentially successful escape attempt from the world’s most notorious prison. He submitted it to multiple agencies and was consistently rejected. Finally, he sought out the agent of Don Siegel and cleverly deceived a way to get his script to him. Siegel read the script and enjoyed it, passing it on to Eastwood as their next potential partnership.

Siegel and Eastwood, once close friends and frequent collaborators, had not made a film together since the original Dirty Harry (in which Eastwood had even directed a few scenes). Eastwood agreed to let his old friend direct if the film could be made through Malpaso Productions (Eastwood’s film company which had produced nearly every film in which he’d been involved since Hang ‘Em High). Siegel wanted production credit, however, and went around Eastwood to acquire the script directly. This choice created tension between the longstanding friends and would seal Escape from Alcatraz – their fifth collaboration – as their final one.

The film tells the true story of Frank Morris (Eastwood), who partnered with the Anglin brothers to mount an escape from the legendary Alcatraz prison in 1962. The film presents the prison warden (Patrick McGoohan) as a cold and cruel figure, choosing not to have him represent a real warden from the prison but rather a fictional archetype. The prisoners suffer various injustices at the hands of the guards and the warden, pushing Morris to develop a risky plan of escape.

Escape from Alcatraz is a different breed of thriller for Eastwood, allowing a deliberate pace to develop tension over an extended time rather than in a series of action bursts. The first half of the film is almost entirely dramatic in nature, establishing a variety of characters within the prison community and the various troubles the inmates suffer while there. Eventually the casualties and restrictions become too oppressive and the second half of the film becomes an escalating puzzle of tension as our characters struggle to enact their plan without being caught by the rigorous routines of the guards.

The performances are unanimously solid, featuring particularly strong turns from Robert Blossoms and Paul Benjamin (and a blink-and-you’ll-miss-him appearance by Danny Glover in his feature film debut). Patrick McGoohan is expectedly dastardly in a role perfectly suited for his special brand of passive malevolence. The film’s script is also remarkable in its focus, despite having little in the way of spectacle or shock and nothing in the way of romance. Whether or not the facts presented are authentic, the film’s tone makes you think that this all went down precisely how you’re seeing it, including the unstated but heavily implied outcome of the escape itself.

The pairing of Eastwood and Siegel has typically yielded strong work from each of them (Coogan’s Bluff was a real dud to me, but Two Mules for Sister Sara, The Beguiled, and especially Dirty Harry are all standouts in Eastwood’s filmography). Escape from Alcatraz represents strong work yet again, albeit of a more restrained variety. It would be easy to sympathize with viewers who are put off by the bridled pace, but chances are strong that most viewers will find the steadily ratcheting tension rewarding and compelling.

It is unfortunate that this marked their last partnership, but it is not wholly unexpected. Eastwood had reached a point in his career where he’d had too many established hits (particularly as a director) and it’s easy to imagine that they’d both outgrown the mentor/performer dynamic that had flavored their earlier collaborations. Presumably, they patched up their differences prior to Siegel’s death in 1991, but there would never be another film from the pairing that was most directly responsible (apart from Sergio Leone’s western trilogy) for Eastwood’s rise and development as a star. As finales go, Escape from Alcatraz may not be the biggest possible hit, but it’s an impressive work nonetheless.