The newest MCU film has monsters, zombies, demons, and mass murderer, giving it a distinctly horror tone, but thankfully director Sam Raimi brings the humor too as a sorcerer and witch travel through the multiverse. 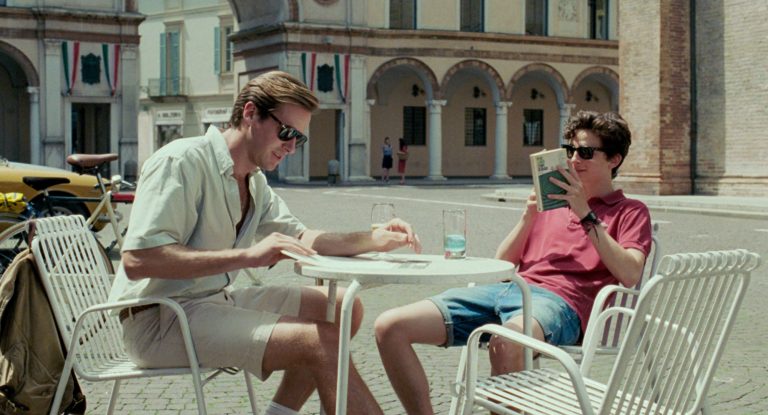 The truth is, I’m just not that interested in seeing Call Me By Your Name. Might as well get that out of the way right up front. But the thing about film criticism is that a responsible critic doesn’t just watch the movies that they might like. Appreciation for cinematic excellence must exist outside of one’s preferences, and so here I sit, about to take in a story about a sensual romance between a 24-year old man and 17-year old boy. The age gap in this story is a big concern, as is Hollywood’s tendency to label sexual lust and desire as “love,” but I refuse to judge this book (adaptation) by its cover. Many critics have raved and gone so far as to label  Luca Guadagnino’s film “a masterpiece,” and that alone makes it essential viewing, regardless of my resulting opinion.

In many ways, Call Me By Your Name earns its place among the best films of the year. Sayombhu Mukdeeprom’s cinematography is gorgeous.  Whether it’s the landscapes of the Italian countryside or perfectly angled interiors, every shot captures a feeling of authenticity to the era. Under Guadagnino’s direction, the details are captured everywhere, in a glance here or brush of the hand there, and the beginnings of Oliver (Armie Hammer) and Elio’s (Timothée Chalamet) romance can be noticed ever so subtly if one just pays enough attention. The acting in the film is also to be commended. Chalamet rightfully deserves all praise and award consideration coming his way after turning in one of the best performances of the year. His boyish charm comes through brightly on the screen, and when he hurts it is impossible not to feel that in your soul. Hammer, who never disappoints, plays the older American visitor pitch perfect. The nuance in his hints of romantic interest are delicately balanced against his boisterous personality until the moment he lets go to release a torrent of built up passion.  The chemistry between the two leads is palpable and the growing desire between them practically drips off of the screen like the beads of sweat on their shirtless chests. And then there’s Michael Stuhlbarg, playing Elio’s father, who is quietly effective for most of the film leading up to one incredibly powerful Oscar-worthy scene in which he must do a thing every parent wishes would never be necessary – comfort a hurting child.

Call Me By Your Name could have been a moving, romantic coming-of-age tale about first love, if not for its two glaring problems. Why the majority of critics have seemed to overlook these issues is worrisome. Legally, there is nothing wrong with the relationship as it is portrayed. A 17-year old boy in early 1980’s Italy was past the age of consent and could make decisions as an adult. But just because it’s legal doesn’t make it right. Hammer is a large man and he physically towers over Chalamet, presenting the appearance of an age gap closer to the actual 10-years between the actors than the 7 between the characters. Elio is shown to be young, still living with his parents, following their rules, and laying his head in their laps for nightly book readings. Oliver, in contrast, is in control of every emotion and hides his carnal urges toward Elio for quite some time before ultimately giving in to the younger boy’s increasing persuasions. The relationship feels much more like a dominating one than one of equally experienced adults giving consent. Oliver is a sexually mature world-traveler. Elio is the opposite, inexperienced and unsure of himself and his sexuality. It increasingly feels like Oliver is controlling the situation and feeding his own passion and desire in the moment without any long-term concern for its effect on Elio. Does he care about Elio? Probably, but that’s another fault of the film. Love is shown in action and sacrifice, not just physical interaction, and we see neither of these in the choices made in Call Me By Your Name.

Also concerning is the way in which both Oliver and Elio treat women. Elio is in a relationship with the sweet, same-aged Marzia (played by the stunning Esther Garrel), but as he struggles with his sexuality the result is that she becomes used for his pleasure and nothing more . While the film focuses extensively on the emotional toll his feelings to toward Oliver have on Elio, it merely skims over how horribly treated Marzia is and what the repercussions could be on her own psyche. Oliver, meanwhile, has his own skeletons in the closet that speak to his in appropriate treatment of women. It’s all washed away, seemingly, because the film promotes the boys’ relationship and sexual exploration as positive. Even Elio’s parents support and encourage the relationship between their visiting research assistant and teenage son. It’s as if Guadagnino believes that the feelings of passion Oliver and Elio shared were worth it no matter who got hurt in the process.

I can’t help but wonder just how this movie might play with a 24-year old man and 17-year old girl, instead of two men. Would as many people be overlooking this troublesome relationship? In contrast to the caring, loving actions shown in the relationship between Kevin and Chiron in Moonlight, Oliver and Elio’s summer romance feels like nothing more than a brief sexual fling, and I’m going to need a lot more depth than that if you want me to care for these characters. 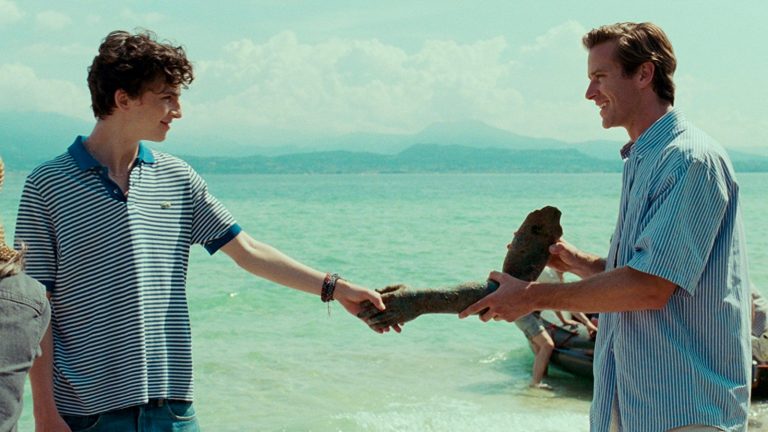 Despite being a beautifully made film that features fantastic performances, Call Me By Your Name‘s inappropriate romance and resulting treatment of those affected by it make this film impossible to recommend. Sex and lust are not the same thing as love, and though the film captures the feeling of desire, its all made dirty due to the age difference and unequal stature of the two men at its center. The film’s craftsmanship is simply undeniable, but its offenses are equally unforgivable.

Guillermo del Toro makes gorgeous films. Whether it’s horror, comic book characters, live-action cartoon, or fantasy, the visual aspect of his movies is always a treat. Now he returns with his first straight fantasy since the much beloved Pan’s Labyrinth. Expectations are (understandably) very high for this story of a mute worker in a secret government lab who discovers what appears to be a merman, or the creature from the black lagoon. Set during the Cold War era, it won’t be surprising at all if someone tries to use this creature as a weapon. The film’s story is the kind of fantastical adventure that del Toro could do wonders with, and I expect a twist or two as well.

Honestly, there is much to like about del Toro’s The Shape of Water. Sally Hawkins turns in an incredible, emotionally-driven silent performance as the mute protagonist Elisa Esposito. Her acting is noteworthy because so much of it requires facial expression and body language to convey nuanced changes in feeling. She is often acting opposite a creature that cannot communicate with her verbally and this results in an intriguing relationship as she sorts out ways to connect with him. It is the wide range of emotions she conveys that actually makes her stand out the most, though. At times tender and caring, other times sad and longing, and ultimately strong  and determined. Also turning in a great performance is Michael Shannon as the film’s antagonist, a cruel and abusive Colonel that discovered the creature (which he coldly refers to as an “asset”) and along with his superiors wants to dissect and study it for possible scientific advancement in space travel technology. Shannon owns this role of a villain and becomes easy to hate. It’s a top-notch portrayal of evil and there isn’t much complexity to his character – whether that’s for better or worse will depend on your taste.

Dan Lausten’s cinematography accents its mostly shadowy colors with moments of vivid color to highlight emotion. The whole film has a noir feel to it without ever being traditionally black and white. Since the majority of the story takes places inside of a bunker or apartment, there isn’t much sunlight in the picture, but it fits this dark fairy tale’s tone perfectly and at least gives the viewer something pretty to look at despite the film’s surprisingly violent content throughout. The creature design is unsurprisingly fantastic. He, of course, has some secrets to reveal and discovering what those were was interesting and eventually vital to the plot.

Where The Shape of Water doesn’t work is in the direction it takes with the relationship between Elisa and the creature. One of the first scenes we see is a fully exposed Hawkins pleasuring herself in the bathtub and that sets the tone for what is to come. Elisa is a woman who has sexual desires and conveying that is not a bad thing. However, del Toro’s method feels unnecessary and sets the tone for a disturbingly sexualized human/creature relationship. If you weren’t certain before, this is a very adult fairy tale, and this one underlying plot point can really derail the entire film for those who are turned off by it. Imagine for a moment if Beauty and the Beast’s love story included him remaining a Beast and the viewer was shown the two having a sexual relationship. What takes place in The Shape of Water is akin to that, minus a believable romance. Ultimately, the film does give the relationship some meaningful touches, with sacrifice and trust coming into play, but the overall path of it can be so off-putting that enjoying the film becomes impossible. 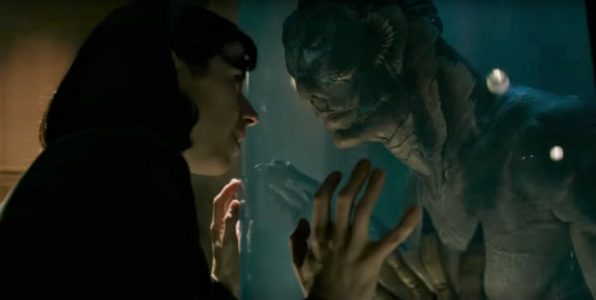 It’s too bad when a film is ruined by one particular choice. There was so much potential here for this to be an intriguing new dark fairy tale, but del Toro’s choice to sexualize a relationship that didn’t need it makes this a hard film to recommend to all viewers. The violence is more frequent than expected and also quite brutal at times, and there is no real hope of redemption for the villains. Despite a gorgeous aesthetic and score, these story elements made it difficult for me to enjoy and I’ll be a lot less likely to get excited about another del Toro adult fairy tale in the future because of it.