LESSON #1: THE WORLD CAN USE A DOSE OF BORAT RIGHT NOW— The rumors were always present that a Borat sequel was in the works from Sacha Baron Cohen. After a few months of secret shooting during the pandemic, Borat: Gift of Pornographic Monkey to Vice Premiere Mikhael Pence to Make Benefit Recently Diminished Nation of Kazakhstan will be unleashed to the world via Amazon Prime just in time for Election Day. Yes, you read that right. Expect the Vice President to be made an easy mark. In this election year, the world is ready for this kind of scathing laughter and cringe comedy. Bring it on.

LESSON #2: WE LIVE IN A WORLD WHERE EVEN THE BEST ARTISTS NEED PAYCHECKS— Barry Jenkins has quickly gained legendary auteur status with his Oscar-winning Moonlight and equally vibrant follow-up If Beale Street Could Talk. Word broke Tuesday with a headline that looked out of We Got This Covered or The Onion if it didn’t say Deadline above it. Jenkins has been tabbed by Disney to helm a follow-up to the CGI-reimagining of The Lion King. Before you dust off your The Lion King 1½ and The Lion King II: Simba’s Pride DVD collectors items, word is this will be a new direction and even a prequel highlighting a young Mufasa. Begrudge him or shake your head all you want, but I say this all the time in this column space: This is a business first and art exposition second. That happens the second you put a price tag on anything. Dozens of indie-level directors have done this in our recent history (David Lowery, Ava DuVernay, Colin Trevorrow, Gareth Edwards) and even more have done it for decades (Nolan, Spielberg, Scorsese). It’s “one for them and two for you.” It becomes about, 1) the effort you put in the big one, and 2) what that paycheck allows you to do next. Take DuVernay. She flipped that A Wrinkle in Time money into When They See Us, an upcoming Colin Kaepernick bio series on Netflix, infused money into her ARRAY distribution company for black artists, and helped launch the Evolve Entertainment Fund to promote inclusion. That’s not the worst aftermath and use of taking the big money. Let’s see what Jenkins can do both with the project and the cache.

LESSON #3: AWARDS SEASON STARTS NOW– Film lovers, it’s October and, even during a reduced year of overall releases, the season of golden harvest is upon us. Oscar season! The virtual and drive-in versions of the usual top-notch film festivals are highlighting some early contenders to watch for. The early buzz leader is Nomadland from celebrated director Chloe Zhao (another indie darling like Jenkins who took the Disney/MCU money with The Eternals). The Frances McDormand starrer won the People’s Choice award at the Toronto International Film Festival, the top prize of the Venice Film Festival, and is slotted as the centerpiece of the New York International Film Festival. Close on its tail are the rave reviews for Regina King’s One Night in Miami. Keep an eye on the upcoming Netflix debut of Aaron Sorkin’s The Trial of the Chicago 7 for another potential frontrunner. Folks, after months of random cast offs and C-level films landing on VOD and streaming sites, the top shelf stuff is coming. Now, the new diversity measures for the Oscars are a whole other (and wonderful) thing. We’ll save that for another WWLTW.

DON SHANAHAN is a Chicago-based and Rotten Tomatoes-approved film critic writing on his website Every Movie Has a Lesson. His movie review work is also published on 25YL (25 Years Later) and also on Medium.com for the MovieTime Guru publication.  As an educator by day, Don writes his movie reviews with life lessons in mind, from the serious to the farcical. He is a proud director and one of the founders of the Chicago Independent Film Critics Circle and a member of the nationally-recognized Online Film Critics Society.  As a contributor here on Feelin’ Film now for over two years, he’s going to expand those lessons to current movie news and trends while chipping in with guest spots and co-hosting duties, including the previous “Connecting with Classics” podcasts.  Find “Every Movie Has a Lesson” on Facebook, Twitter, and Medium to follow his work. (#141) 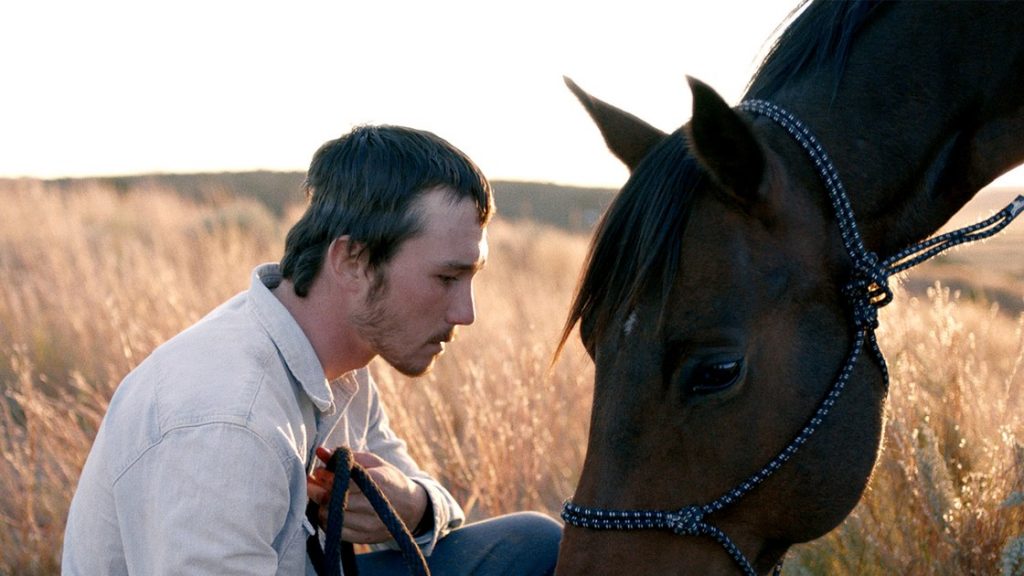 When you ask someone to define the Western genre, it’s likely that the first thing they mention will be Cowboys and Indians or Cowboys and Outlaws, and it’s true that most films follow this formula. Even more modern Westerns like Hell or High Water and Wind River have high stakes shootouts that eventually come to bear. That’s not the case with writer-director Chloé Zhao’s film, though, and this cowboy drama is likely more Western than any of them.

The Rider follows the life of rodeo star Brady Blackburn (Brady Jandreau) as he tries to come to terms with the ramifications of a recently suffered near fatal injury. Blackburn’s challenge lies in having no other skill set. As a Lakota cowboy on the Pine Ridge Reservation and lacking any advanced education, all he knows is breaking horses and riding bulls. He’s good at it, and feels like it’s his calling, telling his sister Lilly (Lilly Jandreau), “I believe God gives each of us a purpose. For a horse it’s to run across the prairie. For a cowboy, it’s to ride.” But as the story progresses it becomes very clear that Brady’s injuries could result in permanent harm, or worse death. He’s left struggling with a question many can relate to – what do you do when you can’t do the only thing you know how to do well?

Key in Brady’s life (along with his younger sister who suffers from Asperger’s syndrome) are his father Wayne (Tim Jandreau) and closest friend Lane (Lane Scott). Lane also is recovering from life-threatening injuries, but unfortunately is paralyzed and unable to speak while being confined to a wheelchair in a hospital room. This relationship is central to Brady’s conflict. When out with local friends and family, he leans much more toward wanting to quite literally “get back on the horse”. But he also spends much of his time visiting and assisting with Lane’s rehabilitation, in one late scene holding the man’s hands in his own as if they were reigns and pretending to help him ride an imaginary horse. It’s in Lane’s pain that we see Brady wrestle with the obvious potential consequences if he continues to ride against the doctor’s advice.

The truth behind the story is almost more intriguing than what is on screen, though. Brady, his father, sister, and Lane are all played by the actual people who experienced this. That is to say, they are dramatically reenacting the events of their own lives. Even the locals are played by non-trained actors, and what’s incredible is that you can hardly tell. Zhao’s bold choice to do this seemingly pays off in the performance given by Brady. In a film with little dialogue, she relies on images and an understated soundtrack to do much of the emotional heavy lifting. The film is gorgeously shot too, capturing the landscape in its natural beauty, unmarred by modernized buildings and technology. Everything comes together and although it certainly moves at a slow pace, sitting with Brady as he drifts through this new version of his life trying to find his way is a powerful experience for every moment.

In The Rider, Chloé Zhao presents a much softer view of the rodeo cowboy life than audiences are used to seeing. Brady’s intelligence shows, and his internal dilemma between what he wants and what is best plays out in ways that are both painful and touching. The real-life portrayal of the Jandreau family adds another layer of realism, as well, creating a level of personal connection to the characters that may not have been reachable otherwise. As both a moving piece of storytelling and cinematic achievement, The Rider excels, and is definitely a slice-of-life Western ride worth taking.