LESSON #1: THERE’S PRICE POINT AND THEN THERE’S STEAL OF A DEAL THAT YOU SIMPLY CANNOT PASS UP— You regular readers know my usual stance on price point.  It is the ultimate decision-maker and motivator of consumerism and it always wins.  Just when you couldn’t think Disney could sweeten the pot more for its Disney+ streaming service, they drop another bombshell.  It’s price by itself AND with the ESPN+ add-in already beat Netflix.  Now, they hit us with the special rate for D23 fan club members that drops the price to under $4 per month when you commit to three years.  If this was a cell phone contract, we would all be wary of being locked into something for that amount of time.  That’s not the case here.  That’s a locked-in price for three years in a streaming business era that just loves to get you signed up early and then jack up the rates.  For less than the price of one expensive cup of exotic coffee a month, you get all of Disney+.  Folks, that’s a regret-free and zero excuse steal.

LESSON #2: ROTTEN TOMATOES DESERVES TO WIN A “MOST IMPROVED” AWARD— For all the Rex Reeds and David Ehrlichs that sink hopes and skew audiences with imagined power, the critical community of Rotten Tomatoes needed an infusion of new voices.  Last August, the Flixster-controlled site drastically updated their Tomatometer Critic Criteria and opened its ranks to a new breed of critics (myself included) that go beyond print journalism and stress inclusion of diversity.  One year later, they have reported their resulting data.  Adding 600 critics was huge. To have 55% of them be women, 60% of them be freelancers, and 10% come from video and podcast sources is even more huge.  Thank you, Rotten Tomatoes, for the impactful initiative and impressive follow-through.  What a facelift!

LESSON #3: THOSE WHO CANNOT DO, TEACH— Quite likely for just about every movie fan who has ever seen Matthew McConaughey work or talk about his craft, “scholarly,” I’m betting, was not the first or even the 100th word to come to mind.  Alas, after four years as a “visiting instructor,” the coolest of cool Academy Award winner has become a full-time film “professor of practice” at the Moody College of Communication within the University of Texas-Austin.  This looks like a true commitment and not a gloryhounding publicity stunt in any shape or form.  From one teacher to another, good for you!  The classroom can use your inspiring energy and voice of experience.  Now, all I picture are the hot-for-teacher students from Raiders of the Lost Ark that faun over and derail Professor Henry Jones with their eyelid mesages.

If that starts happening to you, Matt, that’s how you know you’ve made it.  I can hear it now: “I just love these college girls.  I get older and they stay the same age.”

LESSON #4: GERARD BUTLER IS A POOR MAN’S LIAM NEESON— The weekend box office victory of Angel Has Fallen has reminded us that Gerard Butler has a certain successful niche that people pay money to see.  Like the matinee idols of the 90s that came before him and kicked and punched (Van Damme, Seagal) their way victoriously through raucous R-rated action flicks, the 300 star and an arsenal of fireams can do the same thing.  He’s beginning the Liam Neeson route early, right before turning 50 this November.  Make a few more winners like the Fallen series and Butler can hope to equal and maybe supplant Neeson.  He’s found a fan romance in Vulture writer and critic extraordinaire Bilge Ebiri after his “I Think I Love Gerard Butler” editorial this past week.  Great read!

DON SHANAHAN is a Chicago-based and Rotten Tomatoes-approved film critic writing on his website Every Movie Has a Lesson. His movie review work is also published on 25YL (25 Years Later) and also on Medium.com for the MovieTime Guru publication.  As an educator by day, Don writes his movie reviews with life lessons in mind, from the serious to the farcical. He is a proud director and one of the founders of the Chicago Independent Film Critics Circle and a member of the nationally-recognized Online Film Critics Society.  As a contributor here on Feelin’ Film now for over two years, he’s going to expand those lessons to current movie news and trends while chipping in with guest spots and co-hosting duties, including the previous “Connecting with Classics” podcasts.  Find “Every Movie Has a Lesson” on Facebook, Twitter, and Medium to follow his work.  (#114)

For this week’s FF+ we take a look at some of the movie and TV news coming out of Disney’s D23 Expo 2019. We discuss new trailers, casting announcements, and some of the new details around how Disney’s streaming service Disney + will work.

LESSON #1:  WALT DISNEY DISNEY STUDIOS IS GOING TO MAKE A LOT OF MONEY— I’ve mentioned in this column in the past about how Disney’s multibillion dollar purchases of Marvel Comics and LucasFilm look like bargains.  Throw in their cushy partnership of Pixar and Disney is stocked like Tom Brady’s mansion.  Their 2017-2019 release calendar (see image below) is absolutely loaded with popular content and a wealth of merchandising tie-ins.  Just move Fort Knox to Orlando or Anaheim already. 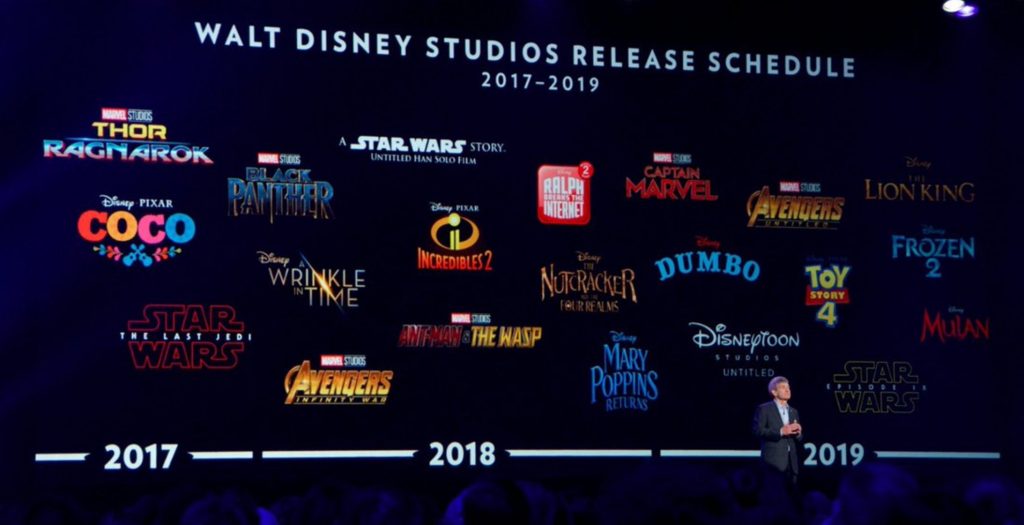 LESSON #2: DISNEY IS MISSING OUT ON ORIGINAL CONTENT— Looking at that slate of future cash cows, there is one “BUT” or one orange flag.  Where is the original content that used to make Disney great?  Where are the live-action works like Queen of Katwe?  Seventeen of the 21 films on that list are sequels, reboots, or parts of existing franchises.  That number goes up to 18-of-22 you include Guy Ritchie’s Aladdin.   I get that they sell, but sequels can bomb and even the perfection that is Pixar has been burned by them.  Other than Coco and A Wrinkle in Time, I don’t see Disney learning that lesson.

LESSON #3: DISNEY’S D23 FAN CLUB CONVENTION WILL REPLACE THEIR SAN DIEGO COMIC-CON PARTICIPATION— Speaking of making waves and making money, this lesson is more a prediction of something I think will come to pass very soon.  With their annual D23 convention, Disney has their own stage to showcase their own products without the competition or sharing that comes from Hall H in San Diego.  They also have full control and get every dime that comes from that event.  To quote Field of Dreams, “if you build it, he will come.”  Disney has the products people want to see and, thanks to their theme parks, they know people will pay to travel across the country to interact with them.  They have their own thing with 100% profit.  They don’t need San Diego anymore.

LESSON #4: REMOVE THE RACE LABELS FROM MOVIES— A film with predominantly black performers isn’t a “black film.”  It’s “a film” the same way you, I, or we would say for a film with white performers.  The caveat is when the film is in another language than English.  Then you can use the adjective “foreign” or “foreign language” film.  To use a race label in 2017 is embarrassing and more than borderline cultural segregation.  For a side-by-side comparison on this point, look at this summer’s earlier Rough Night and the new Girls Trip opening this weekend and how they are perceived and ultimately marketed.  My favorite line from the linked article from The Outline is “if it feels unfairly reductive to categorize movies as ‘white’ or ‘black,’ that’s because it is.”  Start removing these labels from your vernacular.