I keep wondering what we did to deserve this. In this era of blockbuster fatigue and sequel after sequel of middling franchises grasping for every last drop of blood from the turnip (I’m looking at you Pirates and Transformers), how do we rate a trilogy of films, about talking monkeys of all things, that has been handled with such care- with such dedication to story- as to be considered in the discussion of the greatest trilogies of all time? 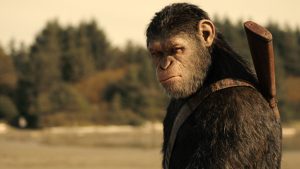 First, Michael Giacchino‘s score is on a different level. Music exists in film to accentuate the experience, ramping up or slowing down as needed.   A lot of time, the music just exists as white noise in the background, unnoticed. But when that music works its way into your core being, ebbing and flowing with the tempo of the visual experience, forcing you to feel every crescendo of action or tender emotional beat, music has done more than accompany.  The music here transcends conventional usefulness and forces the viewer to swallow the film whole.

That’s what a film’s score should do. It looks for the viewer who isn’t engaged (how that could be in this instance I don’t know), grabs them by the ear-hole, and makes them be engaged. In War, the dramatic beats of the timpani as a call to arms, or in the quietest of moments when the distant ding of a triangle accompanies a fallen teardrop, Giacchino provides emotional guidance, almost cathartic in its precise execution. 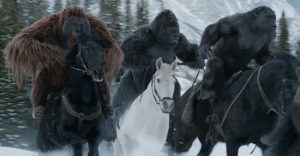 Secondly, Andy Serkis. I’ve been that guy over the past decade claiming what Serkis does is not true acting, and all of the hubbub over championing him for Academy honors as such should be beaten down. Well, color me converted. Serkis IS Caesar.  Every twitch- every nuance- every look into the depths of Caesar’s tired, battle weary eyes is like looking into the inner core of someone we should feel guilty for having bothered.  Serkis has taken motion capture to a masterful level. Not only should he be in the discussion of best actor, there should probably be an award adorned with his name given out for the best in the motion capture arts each year.

That said, Weta Digital, the New Zealand based visual effects company spearheaded by Peter Jackson, should hold exclusive rights to do all VFX work in all films from this point forward. In all three films, the way in which the apes move on screen is seamless.  It’s near impossible to tell that the humans and the apes aren’t truly coexisting within this world. When we aren’t distracted by sketchy CGI, we can concentrate on the important things, like getting caught up in the story and the characters. Isn’t that novel. 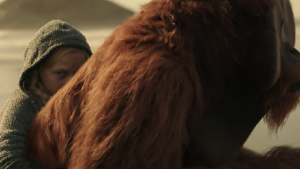 As for the story, is it any good? In my opinion, absolutely. There is a Shakespearean quality to this overall story, coming forward in earnest midway through the second film with the relationship between Caesar and his nemesis, Koba (Toby Kebbel).  In his third film, Caesar is forced to come to terms with the fallout of his actions leading up to this point, as a new dramatic turn of events muddies the waters of his already fragile psyche. Caesar’s will to lead is tested as new priorities consume him.

Themes of morality have hovered over this series from the onset. The Apes are intentionally constructed as sympathetic characters.  Beasts yes, but never in a way that suggests they seek anything other than a means to coexist with humans.  The humans, well, they just can’t help themselves from doing what humans do.  It’s the human’s God complex exhibited in the first film, along with a nasty little flu bug,  that brought us to this point, and the humans still can’t find a way to settle differences without succumbing to destructive tactics. Eradicate enemies. Destroy. Kill. It’s never, hey, these monkeys are freaking talking to us in English! Because, human. 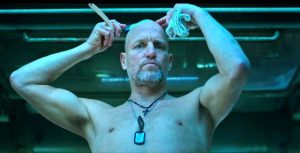 The main human villain here is Woody Harrelson, known only in the film as The Colonel.  This is undoubtedly a role designed for the type of actor Harrelson is. No nonsense, ruthless, and devoid of any semblance of ethical fortitude. He isn’t constructed with a ton of depth, and he doesn’t need to be. His lengthy diatribe of why he is how he is warrants perhaps just a touch of sympathy from the viewer- at least we understand where he’s coming from- but Harrelson urges just enough dickishness from the character to keep any good will he might have earned at arms length.

Also notable is young actress Amiah Miller, as the orphaned girl, Nova, who is forced to tag along with Caesar and his posse on their journey. Miller’s scenes, especially during times of emotional strife, are next level. Stricken with a side effect of the Simian Flu in which she loses her ability to speak, Miller must carry the full weight of her character with her eyes and expressions. The more subdued the scene, the more brilliant is Miller’s performance. One scene in particular, as one of the apes is wounded, will stick with you long after the film, and the credit goes to Miller’s unspoken emotional gravitas.

Adding a touch of levity to the film is newcomer, Bad Ape (Steve Zahn). His presence is welcome as the story does travel down some weighty, emotional paths.  Nothing that Zahn does with the character pushes the film into corniness, but he does provide a couple of laugh-out-loud moments. 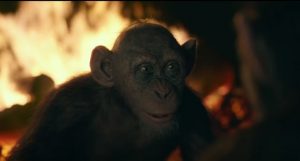 War for the Planet of the Apes is a satisfying conclusion to the trilogy. There is an emotional yet oddly cathartic final scene which sums up Caesar’s journey to protect and serve the Apes. It works as both a catalyst for future installments of the franchise or as a final exclamation point if that’s what the studio prefers to do. Director Matt Reeves has created such an immersive, thoughtful experience with endless re-watchability.  These damn, dirty apes are the gold standard from which the summer blockbuster should be based upon from here on out.