With every toe-tapping, dashboard banging note, Baby Driver energizes.  It’s not a musical about driving, but music drives the movie; each screeching tire perfectly synched to a tune selected specifically to ride shotgun with the action on screen.

Let’s be honest, the central plot of Baby Driver is nothing new. ​Man has to work off some debt, in unsavory ways, to appease a “boss” who keeps his charges in line with threats and innuendo. Standard gangster fare. Here though, writer/director Edgar Wright (The World’s End, Scott Pilgrim vs the World) changes up the game, infusing a familiar narrative with an uptempo beat. Let’s envision a mashup of Drive, The Fast & the Furious, and a badass Spotify playlist. With earbuds firmly in place, Baby Driver puts the pedal to the metal, rarely slowing down long enough to allow its audience to catch their breath. 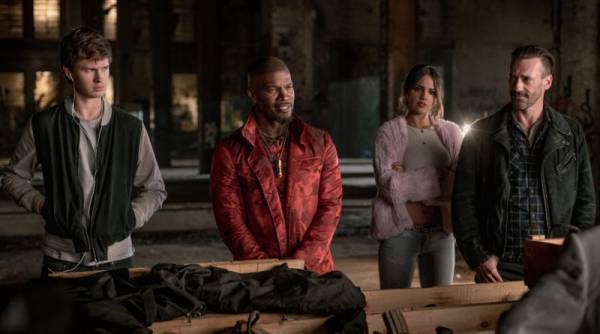 Our protagonist here is Baby (Ansel Elgort, Divergent, The Fault in Our Stars), the expert getaway driver reluctantly on the payroll of Doc (Kevin Spacey, House of Cards), to whom he is working off a debt from an earlier poor life decision. Baby is quiet, often mistook as mentally challenged, but he’s in his element behind the wheel of a fast car and under the spell of a righteous soundtrack. An accident as a child has left him, as Doc tells it, “with a hum in the drum.” Music gives him respite from his disability. It defines him, and is essential in doing his job on Doc’s team. Without the beats, Baby is lost.

Elgort plays Baby with a confidence befitting a kid with mad driving skills and cool shades, but also with a vulnerability, especially in his confrontations with the film’s ensemble of bad guys. Baby trusts his ability to perform when called upon, but his composure is susceptible to rattling when his inward personality is forced to bubble up in weighty social situations. Baby could have easily come across as stiff and mechanical, but Wright forces him into awkward interactions which allow Elgort to show some range with the character.

Also to help Baby relate as a character, enter Lily James (Cinderella) as the requisite love interest, Debora. James is so gosh-darn adorable, it’s easy to overlook her character’s lack of real definition. She feels tacked on as a plot device, dutifully available for Doc to threaten, or to offer words of encouragement to Baby at just the right moments. James isn’t at fault here. She smiles and captures us with her slight southern drawl as directed, but I wish Wright had dug a little deeper, especially given that any girl in their right mind would have run from this situation as fast as possible. 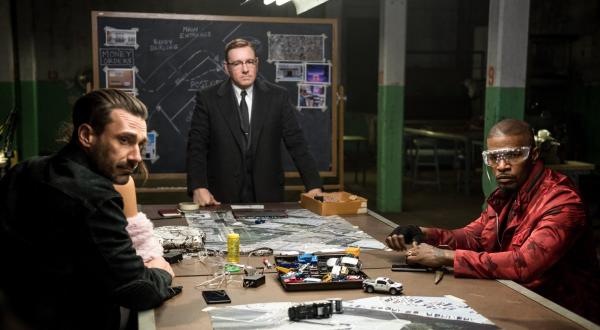 Along for the ride is a cadre of thugs: Griff (Jon Berenthal, The Walking Dead), Buddy (Jon Hamm, Mad Men), Darling (Eiza Gonzalez, Jem and the Holograms), and Bats (Jaime Foxx, Annie, Horrible Bosses 2). Doc never works with the same crew twice, so these parts are interchangeable with a few lesser characters, but these four carry the lion’s share of the load.

I’m not fully sold on Jon Hamm here. He doesn’t feel comfortable in the skin of Buddy. He fares best early on as a standard bank robber, but when the story diverts from heist flick to a tale of comeuppance, as Buddy’s motivations turn to vengeance, Hamm stumbles. It perhaps doesn’t help that Gonzalez’s Darling rates as little more than eye candy on Buddy’s arm throughout the bulk of the film. Whatever they were selling as a couple, I wasn’t buying. She doesn’t do anything to drag the film down, but she’s interchangeable with any other Latina actress in a film staring fast cars.  She’s a cliche, and that’s unfortunate.

Jaime Foxx?  He’s all in folks. Bats, in all of his psychopathic, loose cannon glory, makes the most of his screen time. Foxx manages to remain grounded just enough to be realistically threatening, but it’s pretty clear he’s having a good time chewing up scenery. On the rare occasion when the film slows down to catch its breath, Bats keeps us in. 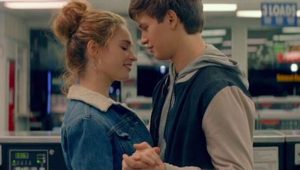 My biggest struggle with Baby Driver is the lack of character depth. Baby in particular is someone I wanted to know more about. There is some lip service, via flashback, to his relationship with his mother and his less than perfect childhood, but not enough to firmly latch onto him as a sympathetic character deserving of my care. Yes, I wanted to see him ultimately succeed, but only in that he’s slightly less of an asshole than most of the other characters. I actually found that I was often more invested in seeing Debora in a better place, so to that end, I needed to root for Baby by default.

The real character is the soundtrack, culled together from various artists, and Wright doesn’t skimp on the awesome in this regard. Even the most mundane of stories (which this is not) is made better with the stylings of Queen’s “Brighton Rock“, or “Bellbottoms” by the Jon Spencer Blues Explosion. Each tune serves a purpose, whether to bind a set of characters falling in love, or to accompany a hail of gunfire and burning rubber. The failings in character definition are more than made up for in sight and sound. What could have come off as a screen version of a theme park stunt show works because of Wright’s vision and the complimentary hand of cinematographer Bill Pope, who’s camera is often asked to move to the beat. Where Wright’s story leads, Pope’s camera follows.

Baby Driver is everything you want in a summer blockbuster without the blockbuster after taste. There is already talk of a Baby Driver 2, and I’m torn. Here we have a mostly original concept that no doubt stands on its own merits, and while I feel like that should be enough, I also want to see more of the story of Baby and Debora. Because sometimes all I want to do is “head west on 20 in a car I can’t afford, with a plan I don’t have, just me, my music, and the road.”