More like Thor: Ragnarock ‘n Roll, amirite? From what we’ve seen in trailers, Taika Waititi’s film looks to be a wild ride bursting with color, sound, and laughs. I am admittedly burned out on the superhero genre, but Thor: Ragnarok could be something fresh instead of the standard Marvel fare, and that gives me hope. Embracing the Asgardian mythology and combining Thor’s world with one of my favorite comic book stories (Planet Hulk) provides opportunities galore for rich storytelling. I have faith in Waititi and expect that at the very least he and this impressively assembled cast will provide viewers with a fun time at the movies.

If Thor: Ragnarok is one thing, it’s funny.  No, that’s not a strong enough word. It’s hilarious. Laugh out loud funny. Multiple times. For those who are familiar with Taika Waititi’s filmography this should come as no surprise. The man’s comedic timing is truly great, and his role (you didn’t even know he was acting in the film did you?) steals the show. As a director, Waititi sets the film firmly in its comedic tone right from the start, and it never lets up. Almost everyone gets in the action, from Jeff Goldblum’s eccentric and entertaining Grandmaster to Tessa Thompson’s alcoholic but strong Valkyrie, and of course Thor (Chris Hemsworth) and Hulk (Mark Ruffalo) have plenty of fantastic banter between them. Thor: Ragnarok‘s humor really is its strongest feature and it’s some of the best the MCU has to offer.

But what about the story? If you’re looking for this to be the Marvel film that bucks the routine style of previous films, you’ll be sorely disappointed. The incredible electronic, neon, fantasy aesthetic is a very cool coat of paint on the same old formula. Heroic actions and sacrifice just don’t have much weight to them because everything is a joke in this world. There were numerous conversations where I thought that meaningful character development was coming, but there is never a dramatic payoff. The humor is a constant undercurrent and while it makes the film a lot of fun to watch, it has no depth or staying power because we never connect with the characters or events on anything more than a surface level. 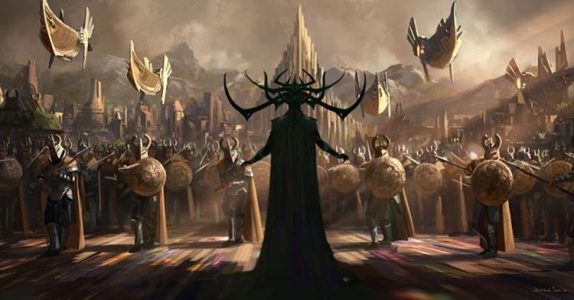 That’s not to say that characters don’t have arcs – they do. This is a hero’s journey for Thor, but other characters must also find out who they truly are if Asgard is going to be saved from the Goddess of Death. That goddess, played by the incredible Cate Blanchett, had potential to be one of the best Marvel villains. Her backstory is intriguing and the film does a great job with the Norse mythology as a whole. Unfortunately, she has little to do other than sling knives around and recite history. She does definitely bring it in the action department, though, and is a worthy foe for Thor and his team. When she’s at her strongest and Thor goes full God of Thunder, it is a sight to see.

Thor: Ragnarok plays in an exciting new genre for Marvel. Its overall aesthetic and tone commit fully to the comedic nature of the MCU and results in one of the funniest Marvel films to date. If a fun, entertaining, visually striking, and hilarious experience is what you’re after, this is a must see. It’s too bad that Waititi couldn’t give it a little more depth and heart, though, because that’s what would have truly been something new. As it stands, Thor: Ragnarok will wow you for a few hours, but you’re likely to forget all about it in a few days.