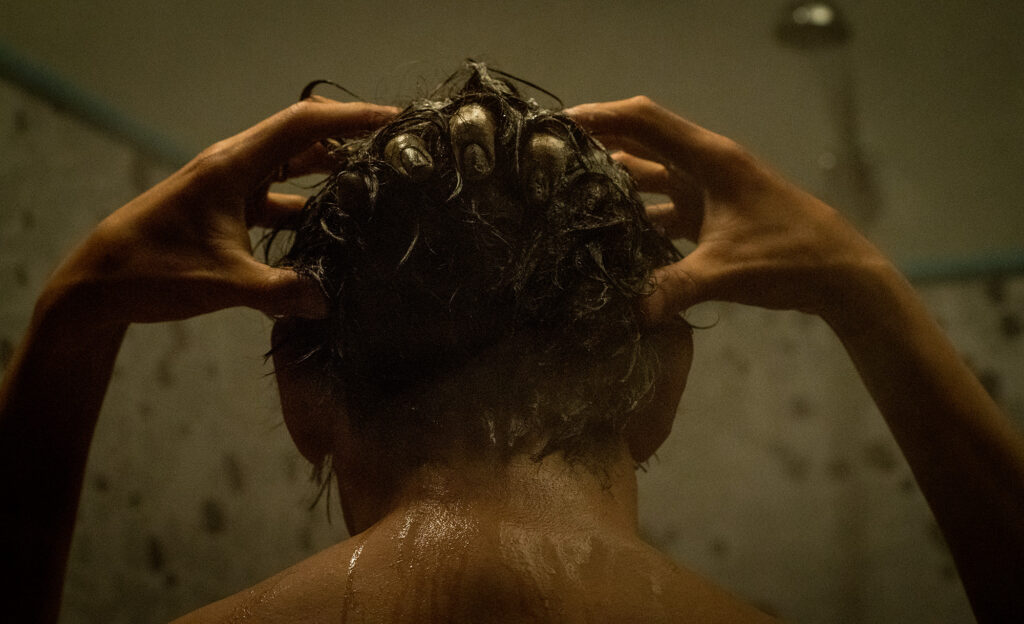 It has been said that the month of January is a dumping ground for studios to unload projects that spark the least potential to be a success. As much as it pains me to say, this claim has been verified with the release of Nicolas Pesce’s “The Grudge”, a horror film that tries to juggle so many characters and superficial subplots that it drops the ball on every level. There is no time to connect with any of the characters who find their life altered by a vengeful ghost known only as “The Grudge”, an evil spirit that stalks anyone unlucky enough to inhibit the space that it calls home sweet home. Suspense and tension should cover every nook and cranny of this narrative, but they’ve been replaced by unimaginative and overused horror tropes. Dullness is the rhythm that carries this horrid horror remake to a land of no distinguishing qualities.

The film uses a non-linear story structure to try and separate itself and the results are less than inspiring. The different storylines are misconstructed into a mess of exposition dumping and paper-thin characters. Our main protagonist is used as a plot device to force the audience into badly edited flashbacks that feel out of place to the overarching narrative. Her role as a police officer gains her access to different files of Grudge victims from past events that all took place in the same haunted house. At times, you think you are following one set of characters and then you are jarred backward to experiencing a different set out of nowhere. Confusion peaks when you are shown the climax of a subplot only to then travel to the beginning of it, erasing the opportunity for authentic stakes. It’s hard to feel connected to the outcome of this film given that none of the characters are written to be anything more than easy fodder for the main villain; there is no personality, charm, or emotional guts to make the serious moments more than forgettable. Consider the biggest crime of this film to be undercutting the supreme talents of a pair of talented actors such as John Cho and William Sandler. This screenplay dealt them poison in the amount of cringe dialogue and farce use of depressing storylines which would ruin any actor’s chance of making their performances work. To make things worse, the final act is essentially a rush job in trying to wrap up all the tangled web of storylines before the audience makes it to the finish line. It felt like the writers submitted the screenplay as the first draft with no revisions or corrections to the flow of different set pieces.

Horror and suspense was manufactured straight from the bargain bin section of the generic store. There is an abundance of poor jump cuts, odd implementation of sound effects, lackluster visual effects, and weak lighting in dark scenes. Some scenes suffer from having human faces drenched in too much darkness; terror scenes didn’t have a stressful effect because there was no way to see the characters or the monster moving around in the environment. There was a weird instance of people popping in and out of the frame, masquerading as a scary surprise. It’s just very easy to see coming and no creative juice is present. I have seen all of the terror tricks this film tries to make unique and it all turns out so bland and tepid to watch. The musical accompaniment to these scenes comes off too hard as a Trent Reznor/Atticus Ross knock-off with badly composed use of pounding drums and broken electronic notes.

“The Grudge” is the kind of experience that will drain the life-force out of the average viewer. It has no crowd-pleasing moments and treats the audience as a child who needs their handheld to navigate what should have been a simple horror film. This is one of the few films I have witnessed in the last few years that does nothing well and is an embarrassment to not just horror but any cinematic genre. 2020 has started off its year by providing me a top candidate for one of the worst films of the year.