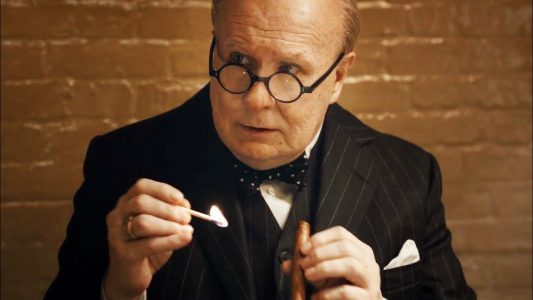 Before 2017, I had never heard of the Battle of Dunkirk. But thanks to Hollywood, we’ve all had quite the history lesson this year, with two films (Their Finest and Dunkirk) addressing that particular event in some fashion. Now a third film enters the mix, set during the same time period but not dealing with the battle specifically. Instead, Darkest Hour focuses primarily (see what I did there?) on one man – newly appointed British Prime Minister Winston Churchill. As Hitler’s forces close in on England, Churchill must make difficult decisions that would affect the outcome of World War II. Playing Churchill is Gary Oldman, and he is already receiving an incredible amount of critical praise for his portrayal of the famous statesman. It will be interesting to see how his performance compares to that of John Lithgow, who just a few months ago won an Emmy for his own depiction of Churchill in the Netflix drama The Crown.  Also a curiosity is whether director Joe Wright will rebound from his underwhelming 2015 remake of the Peter Pan story. Wright’s experience with period pieces such as Atonement, Pride & Prejudice, and Anna Karenina point toward this type of material as being perfect for him, and that provides me with a lot of hope.

Darkest Hour is my kind of biopic. Joe Wright’s film is a little less of a period piece than I expected, though. With only a few scenes of deep melodrama, it unfolds more like a fast-paced political thriller. Wright directs with a dazzling electricity that moves the film forward at a tremendous pace. Dario Marianelli, composer of the wonderful music in Kubo and the Two Strings, provides an incredible audible energy that matches the intensity of Churchill’s fiery personality and the wartime tension felt at the time. The result is a film that, despite being almost entirely dialogue driven, has the ability to put you at the edge of your seat. Since this story is about the great orator Winston Churchill, it is extremely fitting.

The story is also mostly true and I’d encourage viewers to read up on exactly what took place during these important months in 1940. Although Darkest Hours adds a few dramatic elements toward the end of the film, it mostly does justice to the primary players: Churchill (Gary Oldman), King George VI (Ben Mendelsohn), former Prime Minister Neville Chamberlain (Ronald Pickup), and Lord Halifax (Stephen Dillane). Anthony McCarten’s script covers only the month of May – Churchill’s appointment through his famous “we shall never surrender” speech. As Germany draws closer each day, Churchill must weigh the pushing of peace talks from the likes of Chamberlain and Halifax against the proposition of seeing the entire British Army wiped out while continuing to fight back. The Battle of Dunkirk does feature prominently here and Christopher Nolan’s Dunkirk will make a perfect complimentary film for a twin bill.

What elevates the film into greatness, however, is Oldman. He is nearly unrecognizable as Churchill, buried under the hefty weight of prosthetics. But where he succeeds most is selling the idea that Churchill truly did use language and words to turn the tide of English thinking toward resistance of Hitler’s regime. Wright and McCarten do a fantastic job of building this up, giving us little moments of Winston’s oratory brilliance, so that when he walks into Parliament for the final speech we fully believe his words will have the power they need. Oldman’s performance feels like a total immersion into the character, his veins seemingly about to pop at any time, and his stutters and pauses perfectly capturing the enormous pressure weighing Churchill down. I’m not sure whether two actors have ever won an Emmy and an Oscar within six months of each other for playing the same character, but Lithgow and Oldman definitely have that chance. 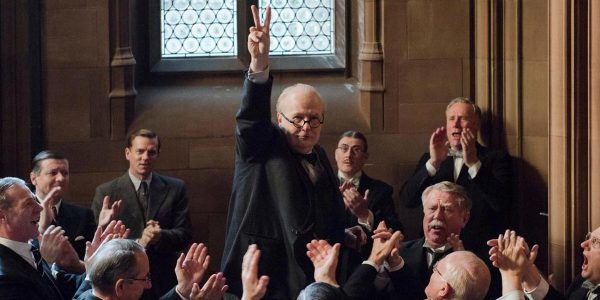 Winston Churchill is a fascinating figure. Historian and politician, but also extraordinary leader. His actions within that first month as British Prime Minister changed the course of world history. Had he sued for peace, who knows if Hitler would have been stopped from overtaking Europe (and beyond). Darkest Hour is as thrilling as it is dramatic in telling this very important story of how a leader used words to inspire a nation. A fabulous film in all respects, consider this a must-see and a rival to the title of best film about Dunkirk in 2017.