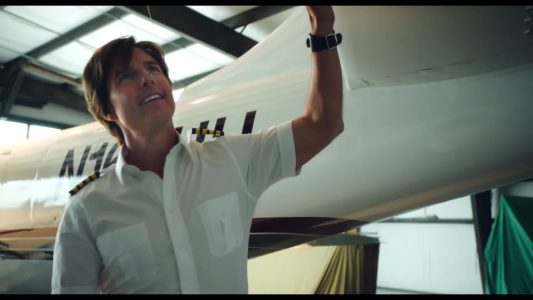 “All this is legal?”

“If you’re doing it for the good guys.”

American Made is based on the true story of Barry Seal, who is recruited to take reconnaissance photos of communist separatist groups in South America for the CIA in the late 70’s. After proving to be up to the task, he’s further asked to act as a courier between the CIA and Panama’s General Manuel Noriega. Before Seal reaches the end of the rabbit hole, he’ll be involved in smuggling drugs and guns and laundering a whole lot of cash. To say more would be to ruin the fun. It is a true story, but it’s not one that a lot of people have heard.

Tom Cruise is great as Seal, a man who in his own words expressed his tendency to leap before he looks. He’s a damn fine pilot and knows as much, but the fun of the movie is watching him react and adapt to the situations he’s thrust into where he gets more and more in over his head. I think Barry would want you to believe that he’s a family man and like all good men who find themselves in bad company, he was just trying to provide for his wife and kids. That might be true, but what we really see in Barry is a thrill seeker out looking for his next adventure and a little extra cash on the side. Domhnall Gleeson is direct and manipulative as Monte Schaefer, Barry’s CIA handler, who is willing to look the other way on Seal’s extracurriculars provided he still does what he’s told. The film could have been stronger had it spent more time highlighting Barry’s relationship with his wife and kids. Sarah Wright does good work with what she’s given as Barry’s wife Lucy, but there isn’t that much there for her to do. Doug Liman’s direction is solid with some pretty-fun camera work that makes much of the movie feel like a documentary. By utilizing a type of talking head narration and home video like images, you’d almost believe this came from the early 1980’s. You get a sense that Liman has trouble believing this story is actually true and so he assumes that the viewer will have a hard time with that fact as well.

This isn’t the kind of movie that’s going to leave you feeling upbeat as your Gary Cooper-esque hero rides off into the sunset with Grace Kelly. Unfortunately, that’s not how this portion of our history as a nation worked out. But if you want to see 2 hours of peak Tom Cruise, I’d recommend American Made.