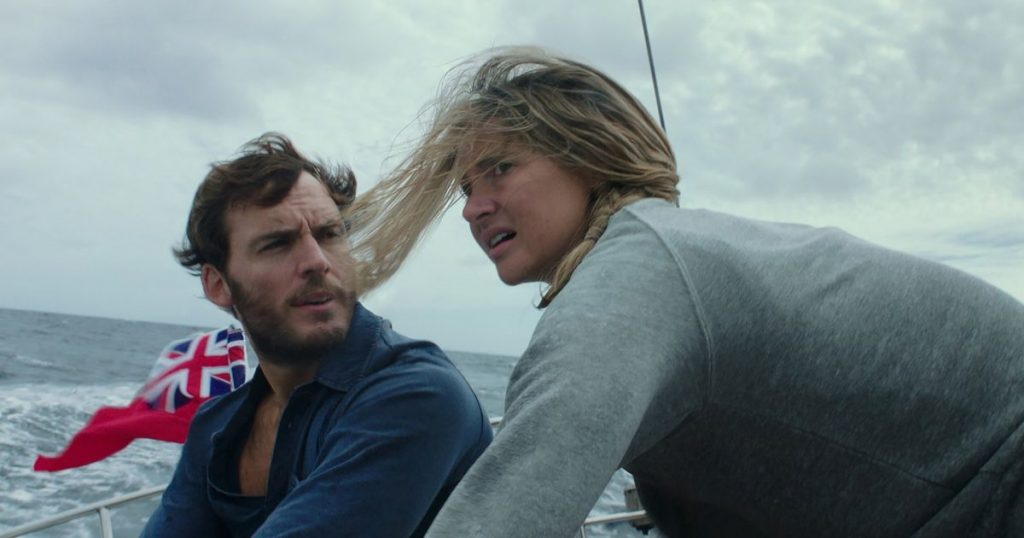 The sea is both majestic and mysterious. As Richard (Sam Claflin) tells Tami (Shailene Woodley) on their first meeting, for him it offers beauty, peace, and the draw of “the infinite horizon”. But the sea is also dangerous, and for sailors braving its vast emptiness alone or in small groups, tragedy is but one mistake or unexpected storm away. Adrift tells the true story of this couple’s experiences as they encountered the category four storm Hurricane Raymond in September 1983 while delivering a 44-foot yacht from Tahiti to San Diego.

Director Baltasar Kormákur (Everest), open the film in the middle. Tami wakes up in the cabin of their capsized, now flooding vessel and frantically makes her way above deck to search for Richard. The chaos of this opening sequence is intriguing as it immediately puts the viewer on edge not knowing what to expect. It also frames Tami as a character so that we see her from a different perspective when meeting her pre-storm. After this opening moment, the film shifts to the past and begins to introduce us to the traveling young American dreamer, but this vision of her bloodied, trembling, and terrified lost at sea always lingers.

This unique structure continues throughout the film. Kormákur parallels the meeting of Richard, a 33-year old English sailor, and Tami with their attempt to survive after the storm renders their yacht immobile. It’s a refreshing way to tell a familiar story. We’ve seen this before, but instead of a straight narrative where boy meets girl, they sail off, encounter danger, and try to get home, we instead slowly have pieces of their relationship history (and personalities) revealed as we see alternate seeing them in various difficult situations while lost at sea. It also keeps us from having to sit through long stretches of Richard and Tami floating on the open water confined to their small boat, which is a big plus. What’s odd is that despite the film’s very tight 90-minute running time, it does feel longer than that.

The trials that Tami endures during her 41 days adrift are quite harrowing. Richard suffers major injuries during the storm and she must singlehandedly find a way to point the ship toward land, keep it afloat, stay fed and hydrated, and retain her sanity while he lays helpless at her side. Shailene Woodley definitely gives one of the better performances of her career, both capturing the adventurous spirit and joy in Tami when she meets Richard and falls in love and then later the immense battle with fear, panic, sickness, and despair she faces for over a month. Sam Claflin is wonderful, as well, and his chemistry with Woodley is fantastic, but for large portions of the film he doesn’t have much to do but groan, unfortunately.

The film features some beautiful cinematography, particularly when Robert Richardson utilizes aerial shots of islands being explored or to show the enormity of the ocean. There is also good use of close-up on the characters’ faces at key emotional moments that creates a sense of closeness for the audience and heightens our connection to what they are feeling. The score is okay. Serviceable but ordinary and forgettable. And the action of the storm itself is brief but definitely powerful. There is quite a bit of shakiness that ensues, so if you’re prone to sea sickness be aware and look away for a few seconds. 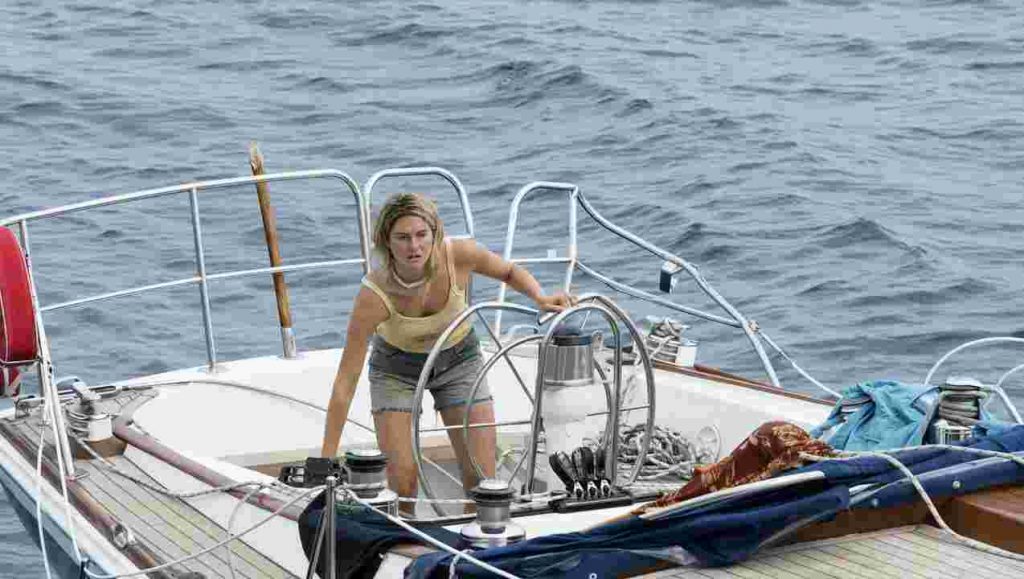 In the end, Adrift doesn’t leave a major mark on the survival film sub-genre. Its non-linear structure and the amazing fact that this really happened do keep it interesting, though, and Woodley shows incredible range in her performance as she navigates the intense emotional swings that the real Tami Oldham Ashcraft most certainly experienced. Due to a major third act development, I’m not sure the film would work as well a second time (or if you knew the outcome going into it), so my advice is to watch the film first and then read up on the even more amazing true story details afterward.