LESSON #1: $54 BILLION DOLLARS IS AN ASTRONOMICAL AMOUNT OF MONEY— The huge Disney/Fox deal that has been rumored finally became official on Thursday.  If you thought the two $4 billion deals Disney paid years ago for Marvel Comics and LucasFilm properties was high, the price tag on this one is enormous, but consider the prizes being the list of holdings coming over in this merger (see the article).  As before in this column, I get the fanboy dreams possible with this (see the character rights breakdown picture below), but I am going to miss the separation of history.  Here’s a good article of the 102-history of Fox.  I remain questioning whether this really is a good thing. 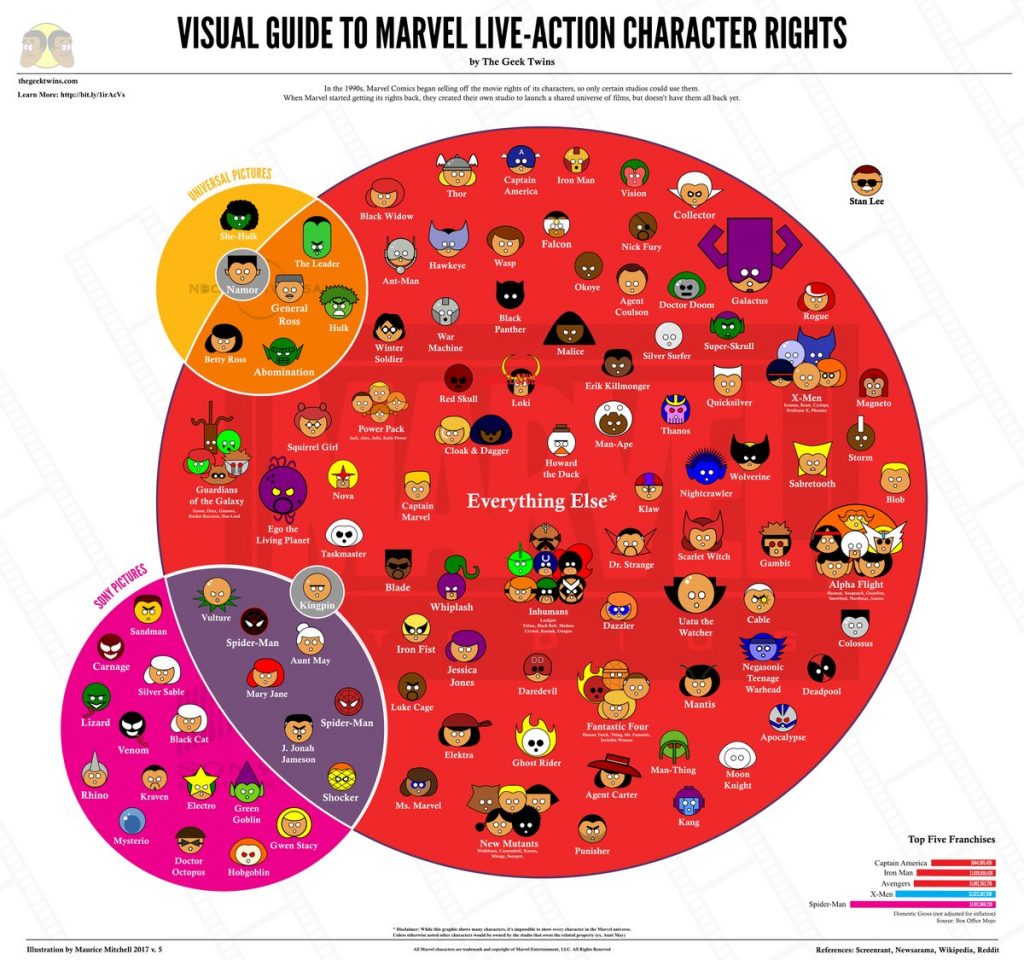 LESSON #2: YOUR R-RATED DEADPOOL WILL BE FINE UNDER THE DISNEY UMBRELLA— Disney CEO Bob Iger already answered one fan uproar after the merger with a statement on the fate of R-rated content like Deadpool coming over form Fox.  His final line was “As long as we let the audiences know what’s coming, we think we can manage that fine.”  People forget Walt Disney used to own the Dimension Films brand from 1993-1999 responsible for films like From Dusk Till Dawn and the Scream franchise.  All Iger and company have to do is create another production shingle under another name just like Dimension.  Hell, just call it 20th Century Fox.  Easy peasy!  Disney’s not going to say no to hit-making money.

LESSON #3: THE GOLDEN GLOBE AWARDS REMAIN AN ABSOLUTE JOKE— This is becoming a yearly rant, but so many of the Golden Globe nominations announced Monday reek of questionable voting, taste, and any semblance of intelligence.  Snubs happen with any awards, but there’s are always more dumbfounding.    The Hollywood Foreign Press never seem to get the category split between comedy and drama right in a believable way.  Zero comedy love for The Big Sick?  No women directors?  Come on.  We’ve always heard the hints that this is a pay-for-play popularity contest for foreign press to throw a party to see and be seen.  I’ve just about stopped watching them altogether.  Still, as always, their winners senselessly affect Oscar races and it stinks.

LESSON #4: SOME FILMS HAVE NOT AGED WELL— I’ve been meaning to do some retrospectives this year since this is the 20th year since I graduated high school in 1997.  This past week, I charted my reflective “10 Best” of 1997 and several other lists and categories on Every Movie Has a Lesson.  The topic came to mind of what films have aged well or poorly over time.  I certainly had some films from 1997 that went down in love and appreciation for me in twenty years.  ScreenRant recently did a piece on the topic and made some great picks.  What are some films that have not aged well for you?  What are some films you liked long ago but have changed your mind on now?  Comment and let’s hear some thoughts and titles.

One thought on “What We Learned This Week: December 10-16”