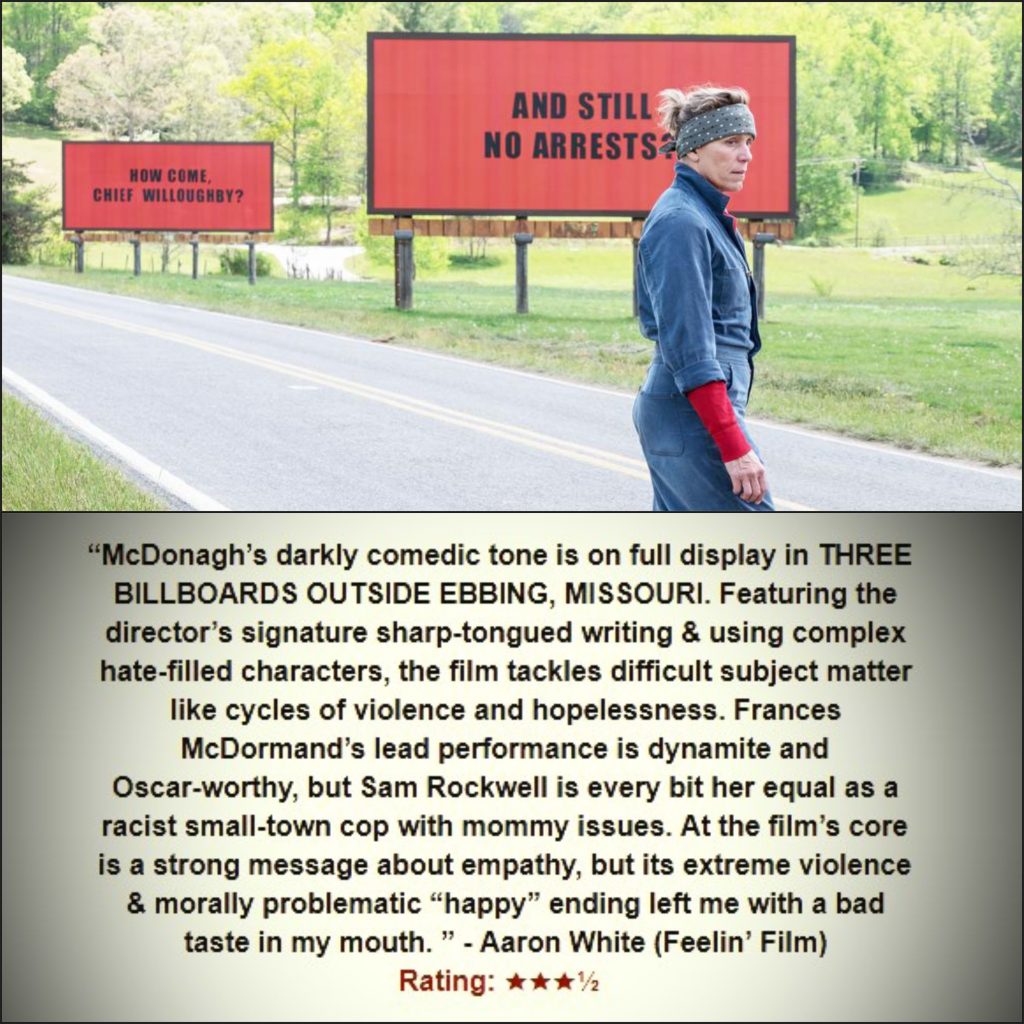 LESSON #1: THREE YEARS LATER, THE SHAME FROM #OSCARSSOWHITE IS WORKING— Led last year by Moonlight, Fences, Loving, and Hidden Figures, a boost of respect for minorities led to historic wins.  This year, it’s Get Out and Mudbound.  Behind the scenes, the Academy invited nearly eight hundred new members—39% of which are female and 30% non-white.  That’s the bigger wake of change from #OscarsSoWhite that shows legitimate progress.  Recently, a piece in The New Yorker posed the question of whether or not the #OscarsSoWhite era is over thanks in part to such gains.  I don’t think so.  The movement is working incrementally for black performers, but more can be done for Hispanic and Asian performers as well.  Oh, and there’s that other new hashtag…

LESSON #2: THE #METOO MOVEMENT DESERVES TO ADD MORE SHAME AND CHANGE TO THE OSCARS— The state of respect and equality for women in the film industry has arguably needed the turnaround push it’s getting now from #MeToo movement longer than minorities have from #OscarsSoWhite.  The writing and directing nominations for Greta Gerwig are excellent and the formal nod to Mudbound‘s cinematographer Rachel Morrison is historic as the first woman in that category, but, again, more could be done.  I know I was rooting for Patty Jenkins and Wonder Woman to receive nomination honors.  Like #OscarsSoWhite, let’s come back in 3-5 years and see where the industry is at after this cataclysmic year.

LESSON #3: DON’T BELIEVE THE GOLDEN GLOBE AND SCREEN ACTORS GUILD HYPE FOR THREE BILLBOARDS OUTSIDE EBBING, MISSOURI— The Shape of Water led all films with 13 nominations, one short of tying the record of 14 shared by All About Eve, Titanic, and La La Land.  Dunkirk is a distant second with eight.  In third, Three Billboards Outside Ebbing, Missouri has seven.  That’s a great haul, but it’s missing one important one that makes it a genuine threat to win Best Picture.  Its celebrated director, Martin McDonagh, was left out of the Best Director raise.  Since the first Academy Awards ceremony in 1929, only four films have won Best Picture without a corresponding nomination for Best Director (Wings, Grand Hotel, Driving Miss Daisy, and Argo).  I don’t like the film’s chances.  Looking at the data on my 2018 Awards Tracker, Get Out has won more Best Picture awards than any other film this season, followed by Lady Bird and then The Shape of Water.  You can virtually narrow the final vote to those three.

LESSON #4: COMEDY CONTINUES TO GET LITTLE RESPECT AT THE OSCARS— Lady Bird is carrying the flag for comedy at this year’s Oscars.  Greta Gerwig’s film stands far above the subtle dark comedy within Three Billboards Outside Ebbing, Missouri and Get Out.  In my opinion, there’s always room for more comedy representation at the biggest awards show of the year.  The Big Sick received a lone nomination for Best Original Screenplay, but was ignored in the acting categories for Kumail Nanjiani, Holly Hunter, and Ray Romano.

LESSON #5. THE ACADEMY APPARENTLY DOESN’T PLAY WITH LEGOS— This lesson is one of two repeats from my Oscar nominations reaction post on Every Movie Has a Lesson because it fits perfectly here this week.  A few years ago, the overwhelming Best Animated Feature frontrunner was The LEGO Movie and it was snubbed from being nominated in shocking fashion.  The LEGO Batman Movie doesn’t have Coco-level pull, but, gosh darn, it’s better than Ferdinand and The Boss Baby.  Expect one Alec Baldwin Trump joke and a tuxedoed stage appearance for WWE star John Cena as a presenter.

LESSON #6: NETFLIX HAS BROKEN THE GLASS CEILING WITH MUDBOUND— Here’s the final repeat.  Dees Rees, Virgil Williams, and Mudbound have made Netflix a new and legitimate player for quality film.  Their efforts mostly remain undiscovered treasure as the newfangled digital arthouse.  For every high-profile Bright, there are five other films like Mudbound, First They Killed My Father, Our Souls at Night, Win it All, and War Machine.  Mudbound deserves this love and Netflix is just getting started.  Give it time and they have the money, talent draw, and ability to invade the Oscars the way they’ve already invaded the Emmy Awards for television.

LESSON #1: DARREN ARONOFSKY IS AS AUDACIOUS AS THEY COME— Love or hate his films (and there is a lot there for both emotions), but Darren Aronofsky has cajones, talent, and personal integrity to make bold films his way and for his own artistic expression.  mother! is the latest chapter of a brazen filmography of Noah, Black Swan, The Wrestler, Fountain, Requiem for a Dream, and Pi.  The guy is operating at another level and uses a different elevator of crazy.  Recognize the skill through any love or hate you harbor to his films.

LESSON #2: GUILLERMO DEL TORO’S THE SHAPE OF WATER IS YOUR FIRST OSCAR CONTENDER— The master of creature creation’s romantic fantasy film won the prestigious Golden Lion award as the top film of the Venice Film Festival.  Put it at the top of the standings while it also competes at the ongoing Toronto International Film Festival.  If The Shape of Water were to win at TIFF, hot damn, you can switch the word from “contender” to “frontrunner.”  In other categories, Venice awarded its acting prizes to Kamel El Basha for The Insult and Charlotte Rampling for Hannah, its screenplay award to Martin McDonagh for Three Billboards Outside of Ebbing, Missouri, and the best director prize to Xavier Legrand for Custody.  Within the next week or two, I will report the TIFF winners in this very column.

LESSON #3: “WHITE PRIVILEGE” WILL BE THE MOST POLARIZING SUBJECT MATTER AND NARRATIVE THIS AWARDS SEASON— I screened and reviewed the Ben Stiller vehicle Brad’s Status this week and if I had to retitle the film, it would be White Privilege: The Wake-Up Call.  The movie has a strong introspective quality about it, but its message is going to fall on so many deaf ears to any demographic that’s not a middle-aged white male.  Consider that a crutch and a hindrance, even if the film was good.  I fear the same thing will happen to an even higher profile film this awards season, namely George Clooney’s Coen brothers collaboration Suburbicon.  Clooney was stumping for the film and Venice and found himself answering the sticky white privilege labels and questions.  To his great credit, he’s sticking to his guns about the purposeful satire and commentary of this film.  The film may work, but does that mean it will play that way to general or even voting audiences?  I’m betting the white privilege labels aren’t far behind for Alexander Payne’s Downsizing and even mother! too.

LESSON #4: PATTY JENKINS DESERVES THE SUCCESS COMING HER WAY— Warner Bros. made it official this week signing Patty Jenkins to return as the director of the Wonder Woman sequel.  The first film’s runaway success netted her a $7-9 million payday, the highest ever for a woman director, and a little percentage of the back-end profits for good measure.   Slowly but surely, the pay gap can and should close.  Patty Jenkins deserves this reward and I’m glad she’s one of the leaders for equal professional standards.  Kudos!

LESSON #5: THE IMPORTANT THING IS TO GET A FILM DONE RIGHT— I’ve talked in this column over the summer about the many news items of production ups-and-downs.  Instances include when Justice League called on Joss Whedon to step in for extensive reshoots or the dismissals of two different Star Wars directors.  This week, all signs point to J.J. Abrams returning to the director’s chair for Episode IX and delaying the film an additional seven months to reshuffle the deck.  On the smaller side, ace composer Johann Johannsson is leaving Blade Runner 2049 less than a month before its release.  We take those breaking stories as signs of trouble and possible evidence of a lemon to come.  We’ve been doing it in the internet age since Titanic was delayed from a July 4th weekend opening to Christmas in 1997.  Sometimes those fears become justified.  Maybe, just maybe though, the delays are the right moves to ensure a proper finished product.  Maybe a little more patience and extra time used to fine tune a film can finally win in the age of instant gratification, manic buzz, and “what have you done for me lately.”  We are a voracious audience sometimes, myself included, but maybe we can soften our Chicken Little-level overreactions.  Call this an early New Year’s resolution for this writer.