Who would have thought that an animated movie based on Lego minifigs would ever become must-see cinema? But here we are. THE LEGO MOVIE 2 goes bigger than ever before and we’re a bit split on just how well that worked. We talk through the pop culture reference-heavy thematically rich sequel with so much going on that it couldn’t help but give us plenty to discuss. Our hope is that this podcast is gonna stuck inside your heeeeeeaaaad. 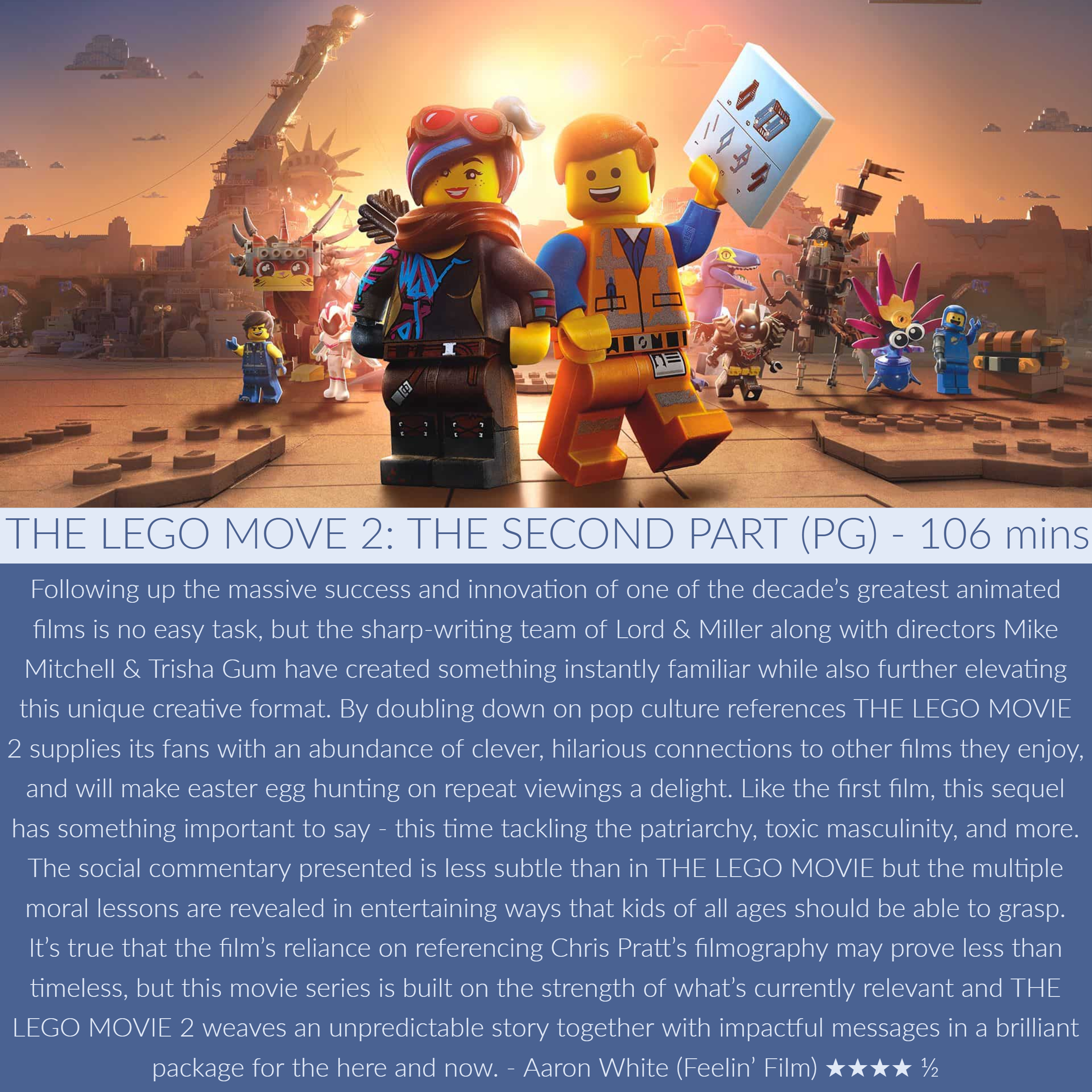 LESSON #1: THE HAN SOLO MOVIE IS IN BIG TROUBLE— Any film where the director leaves the project six months into shooting (and triple that time in pre-production) is more than a shade problematic.  When that film is a nine-figure budgeted potential blockbuster under the Star Wars banner of the Disney label, that shockwave of s–t hitting the fan is even greater.  The firing of the 21 Jump Street and The LEGO Movie team of Phil Lord and Christopher Miller from the upcoming solo prequel Han Solo film starring Alden Ehrenreich and Donald Glover draws ire and head-scratching.  The more that we hear about it, the worse it sounds.  This far from the first time this has happened in Hollywood and several classics rose out of some of these situations, but the news this week is not a good sign in the slightest.  If this was 1997 after Apollo 13 and Ransom or 2007 after The Da Vinci Code and Cinderella Man, I’d feel a more excited about Ron Howard, but this is 2017 and his last decade (outside of Rush and Frost/Nixon has been rough. Go ahead and say it: “It’s a movie no one asked or anyway  #teamharrisonford.”  Maybe this becomes a lesson to Disney to keep the anthology films away from recasted prequels.

LESSON #2: FIND A WAY TO RETIRE AT THE TOP OF YOUR GAME— Reclusive-yet-renowned king of all cinematic thespians, Daniel Day-Lewis announced his retirement from acting this week.  Take the man at his word.  He is notoriously selective and has never chased a paycheck.  Can he be talked out of it with the right pitch in a few years?  Maybe, but if it sticks, the man retires at his peak as a living legend.  Lewis is the only man is history with three Oscars for Best Actor and is gunning for his fourth as a swan song with Paul Thomas Anderson’s as-yet-untitled new film coming this December.  It won’t take much for the deep industry respect for Lewis to start etching his name on that future statuette.

LESSON #3: THE EXCUSE OF “WE DIDN’T MAKE THIS FILM FOR CRITICS” AND ITS MANY ITERATIONS CARRY ZERO WEIGHT— Yes, as press credentialed film critic in Chicago, I find myself from time to time lumped into the hate volleyed at critics who have differing opinions than the box office results might show.  The Mummy director Alex Kurtzman is the latest film director to push back against poor reviews to cite more positive audience response.  I don’t know if foreign box office and a B- from Cinemascore audience ratings is anything to brag about.  News flash, Alex and all other directors and studio heads: Critics are fans too and an extremely small sample size.  We’re munching on the same popcorn and putting on the same pants.  I’ve said this before and I’ll say it again.  Want better results?  Make better movies.

LESSON #4: DIRECTOR COLIN TREVORROW DOESN’T GET IT AND WE DON’T GET HIM EITHER— I’m as big of supporter of the breakout indie film Safety Not Guaranteed as much as the next cinephile of discerning taste who has discovered it, but I don’t know if what has come to Colin Trevorrow and is coming to him in the future, i.e. Star Wars, are good things for audiences.  The reactions to his newest film, The Book of Henry, are polarizing, to say the least (I was fine with it, but I’m in the minority).  Veering uglier, Pajiba put together a nice and telling piece titled “The Upwards Falling of Colin Trevorrow and Why It Matters” recently examining his treatment of female characters and quotes on the state of female directors.  I buy what that column is selling.  This man is beginning to reek of tone-deafness and I don’t know if the critical main trilogy of Star Wars is the place for him.