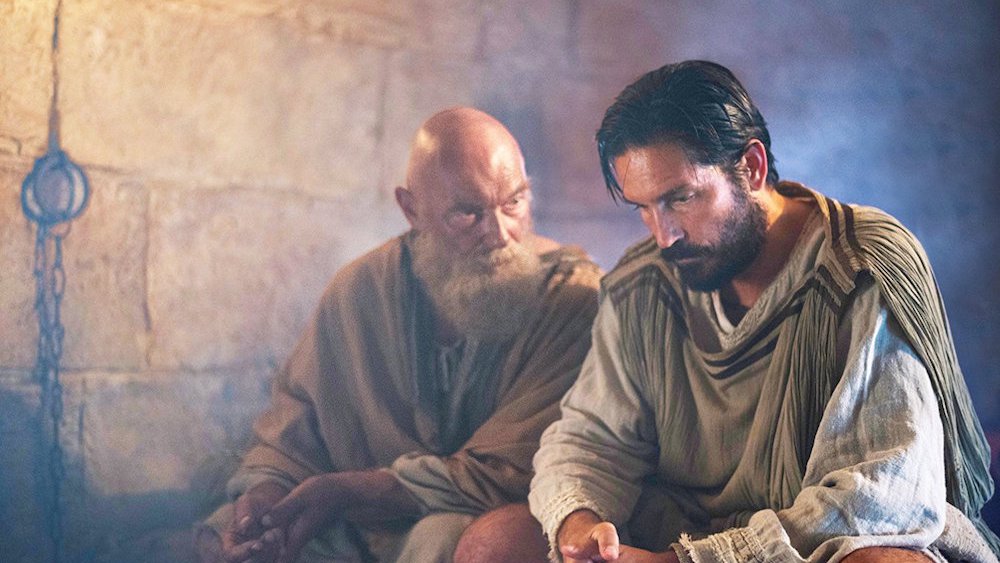 Welcome to our newest feature, Now Available, where we’ll give you a quick review of a film we didn’t cover when it was released in theaters that’s releasing for home viewing this week, along with a list of everything else and where you can see our coverage on it.

Taking place in the year 67 a.d., Paul, Apostle of Christ follows famed author and physician Luke (Jim Caviezel) as he interviews Paul (James Faulkner), the apostle responsible for writing roughly half of the Biblical New Testament, and interacts with the persecuted church of Rome lead by Aquilla (John Lynch) and his wife Priscilla (Joanne Whalley). Will he be able to use his pen to record the last words of the church father or will his presence attract the ire of Mauritias (Oliver Martinez), the Roman jailer tasked with keeping tabs on Nero’s prized prisoner?

I tend to be one of the faith-based film genre’s biggest critics. For the most part, besides their obvious deficits in terms of production quality, I find that they generally brashly wear their message on their sleeve…and their chest and their hat and their pants with the subtlety of the advertising on a NASCAR driver. While this film doesn’t completely avoid that pitfall, I found that it largely overcomes that with grounded performances lead by the always solid Caviezel and quieter, more contemplative musings on what it means to defend your faith. Filmed in Malta, it looks great and director Andrew Hyatt does a great job from the word go of allowing the audience to sense the danger in which these early Christ followers lived. Whether you’re a person of faith or not, Paul, Apostle of Christ shows a piece of history that is both fascinating and has significance for the world we live in today. It’s not merely good for the genre, it’s just pretty good in general.

Pacific Rim: Uprising: See Aaron’s original review of this sequel here and hear the guys chat about it on the podcast here (if you’re like me and want to rewatch the original first, they talked about that one here).

The Death of Stalin