Join us in the Feelin’ Film kitchen this week as we discuss the delicious food and heartwarming themes of Jon Favreau’s incredible film about an ambitious chef reinventing himself both as a cook and a father.

Someone decided that it was a good idea to take a 1936 short story about a pacifist bull and turn it into a film starring the voice talent of wrestling superstar John Cena. While I know the actor, I didn’t know of the book that Ferdinand is based on. The original story by Munro Leaf and Robert Lawson was initially met with a mixture of opinions before becoming so much of a hit in the 1930’s that it was featured on several commercial products. And now here we are in 2017 to see if it can make a comeback and win over family audiences this Christmas. My expectations for this film are extremely low, but I have at least enjoyed the prior films of director Carlos Saldanha (Ice Age, Rio) and Cena’s casting does make me curious. Just another needless kid’s film, or heartfelt and moving animated story with an important message or meaningful life lesson? Time to step into the arena and find out.

Well, hey, it’s another anti-bullying movie. And that’s not a bad thing. Because people shouldn’t bully others, ya know? Poor Ferdinand grows up with plenty of this from his fellow calves, who have trouble accepting a bull who just wants to smell the flowers instead of fight. Tragedy strikes while Ferdinand is still young and he escapes to the country where he takes up residence at a flower farm. Convenient since he loves flowers so much, right? And also convenient that the little girl who befriends him actually knows his name is Ferdinand, too! Yes… if there is one word that I would use to describe Ferdinand it would be “convenient.” Every plot choice works perfectly because it has to, not because it makes any kind of logical sense. By the time the animals are driving a truck during the film’s climax, I was completely checked out.

Along with its message against bullying, the film promotes accepting who you are and loving others for the same. I actually never got the sense that the movie was strictly anti-violence. It (shockingly) shows what the alternative is for bulls who don’t succeed in the arena and could be emotional for young children who pick up on the subtlety. Don’t worry, though, no animated bulls were killed in the making of this movie so they won’t be scarred for life. The irony of John Cena playing a pacifist is somewhat amusing considering his fame comes from a career spent acting out violence for the entertainment of a large ground. Not all that unlike bull fighting, hm?

Characters in the film are hit and miss. Ferdinand himself is well played by Cena. A goofy “calming” goat voiced by Kate McKinnon that plays a large role in the final third of the film has importance as a character but is so annoying that I wanted to plug my ears. The rest of the bulls are unique, have their own strengths and weaknesses, and all play a part at precisely the right time to the surprise of no one. They’re… fine. Oh, and there are also German fancy horses. Who dab. 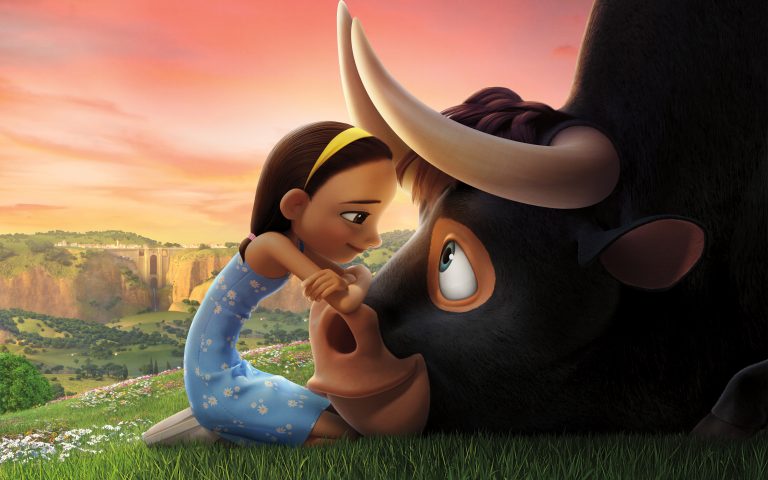 There are so many better animated films to recommend over Ferdinand. The bar has been raised, and every film has a positive message so that doesn’t set this one apart. It does have some charm and Cena’s voicework is good, but an overly convenient plot that tries to balance heartfelt concern with ridiculous unbelievable antics fails to connect and barely entertains. Possibly worth a rental eventually, but with Coco still in theaters there is no reason to spend money and time on Ferdinand.