LESSON #1: SCARY BUSINESS DEALS ARE ALSO SMART ONES— Just as there are two sides to every story, there are two sides to every business deal.  On the surface, Walt Disney, which acquired controlling stake in Hulu as part of the Fox deal, looks like the corporate greed monster or the Borg from Star Trek lore many fear in buying the rest of the Hulu pie from Comcast.  Honestly, though, this was inevitable and necessary. Split between two opposing controllers, Hulu was going to die a slow death of futility and stagnation.  Comcast squeezed Disney for $5.8 billion (far more than it paid years ago for LucasFilm or Marvel) for something the Mouse House was likely going to dissolve anyway with their Disney+ service.  That’s like the movie business equivalent of an NBA trade for an expiring contract that will never play a game in his new uniform. Comcast laughs all the way to the bank and the marketplace loses something that would have become clutter.

LESSON #2: EVEN “NO SUCH THING AS TOO MUCH OF A GOOD THING” MIGHT NEED LIMITS— Now that Avengers: Endgame has cleared the Marvel end of self-imposed radio silence, have you seen the release date reservations of Disney’s calendar for the next five years?  Look below: 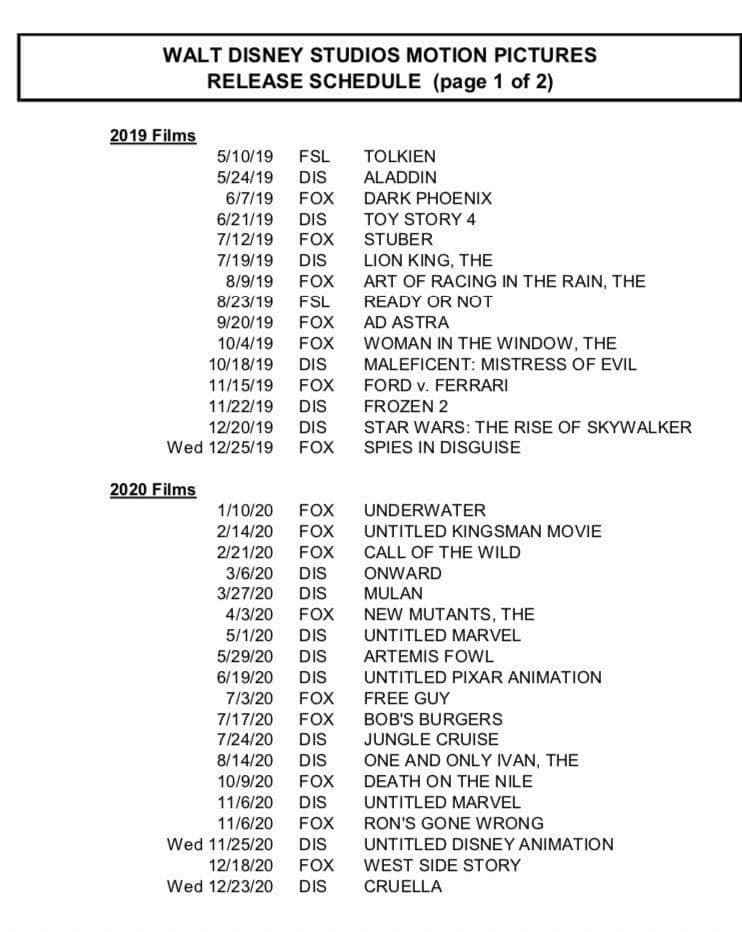 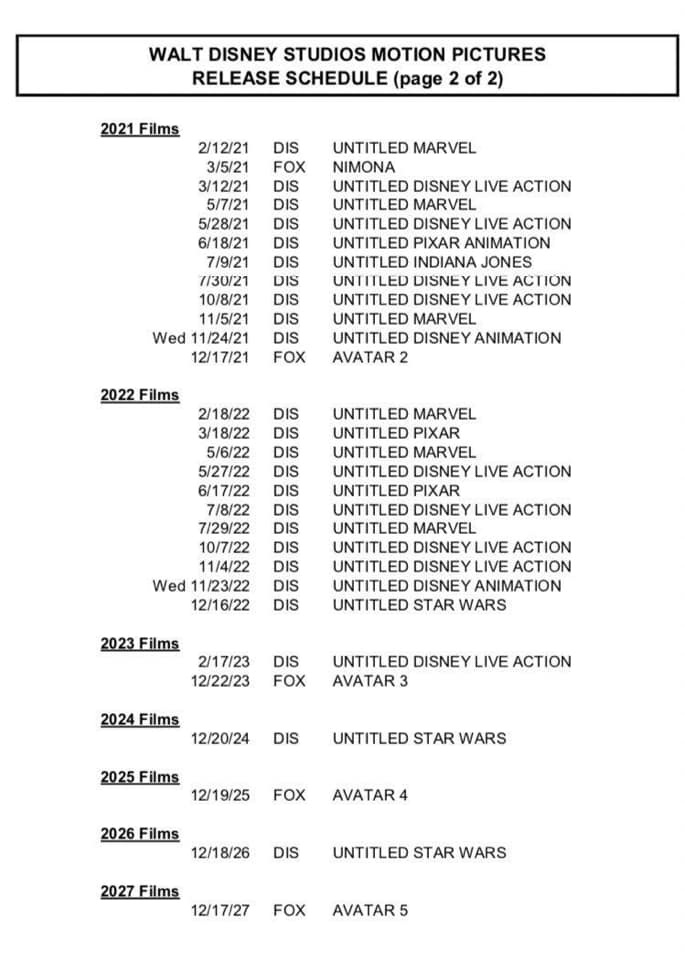 That, my friends, is insane.  Welcome to “market saturation.” I get that they are too big to fail and I get that they still make successful and positive products, but, good golly, space a few things out.  I’ll tip my hat that no new Star Wars films are coming for three years after The Rise of Skywalker.  That’s a nice pause.  That’s only one slow pause on a much bigger machine of cycles.  Other studios see this calendar and avoid these dates in order to not get squashed as the feeble competition.  Still, with a calendar that thick, where can the others hope to go at some point? Yowzers!

LESSON #3: START YOUR RESURRECTION CLOCKS NOW— Gazing into that future of release dates, one could wonder two things.  First, when will inevitable character turnover occur and, second, how long will the dead really stay dead.  I say that second one because anyone who knows the parent medium of comic book films (the graphic novels themselves) knows that no one ever really stays dead.  Even Christopher Nolan couldn’t really “kill” Batman. At this big level, when you put profit-minded and impatient studio execs in charge, I have to think the turnover or resurrection window narrows.  Contributor Jonah Koslofsky over on The Spool did a nice editorial piece this week on this underlying angle.  Sure, Hugh Jackman is supposed to be done with Wolverine after Logan, but what happens if the MCU fame comes calling (especially after/if Dark Phoenix bombs)?  Do we really think Robert Downey Jr. wouldn’t at least be tempted to consider another monster paycheck to return?  If their integrity holds (and I hope it does so as to not cheapen their phenomenal on-screen sacrifices and exits), wonderful, but when do the reboots and recastings start to come (Henry Cavill?! No, dude), especially with Logan’s new MCU home under the Disney roof?  Rub that chin and begin to wonder.

LESSON #4: THERE IS AT LEAST ONE PLACE WHERE DISNEY IS STRIVING AGAINST CREATIVE BANKRUPTCY— Speaking of that lengthy release calendar and recurring characters, the repetitive trends are a little maddening.  Call it whatever kind of adjective-assisted fatigue you want, this steady-yet-successful pattern of franchises, sequels, re-imaginings, and reboots from Disney (and other studios too, let’s be fair) have led many observers to bring out the “creatively bankrupt” label.  A sliver of less of that came to light this week when Pixar producer Mark Nielsen confirmed that Pixar has no other sequels on their planning board after this summer’s Toy Story 4.  Expect, fresh ideas, new faces, and big ideas which are, namely, all the reasons Pixar became successful in the first place.  This counts as promising news!

LESSON #5: THE ARTHOUSE HAS AN INTERNATIONAL LIFELINE— We in the United States are living in big screen blockbuster era.  It’s rare to see little films blow up anymore. If they do, they still have a genre bend to them for cross-demographic appeal matching today’s moviegoers.  The decline of the arthouse scene of independent film has been very apparent for a long time. We’re seeing a market transition where streaming and VOD platforms become their best profit options with multiplexes full of the big cheese.  So, it’s really encouraging to see one more place where arthouse films are gaining audiences: OVERSEAS. Eric Kohn of IndieWire wrote a nice analysis piece that shows a movie like Capernaum opening #2 and early $12 million behind Avengers: Endgame in China.  Here in the states last year, the same movie earned a little over $1.6 million in its entire run.  Opportunity like this for Capernaum and Shoplifters is great news for this class of filmmaking and for the global industry in general.  Slowly but surely, good films will find an audience and tastes can evolve along the way.

LESSON #6: FEAST YOUR EYES ON PRODUCTION DESIGN— In the final lesson suggestion spot, allow me to re-share a YouTube essay from the fine folks at CineFix ranking (with several ties) the ten best production designs of all-time.  This stellar list covers all genres and periods with fairness and there’s not a dud in the bunch. If you don’t notice and appreciate production design when you watch a film, let a little study like this be a primer and have a discerning eye into that craft ingredient when you watch movies going forward.  Production design is absolutely vital, both visible and invisible.

DON SHANAHAN is a Chicago-based and Rotten Tomatoes-approved film critic writing on his website Every Movie Has a Lesson and also on Medium.com for the MovieTime Guru publication.  As an educator by day, Don writes his movie reviews with life lessons in mind, from the serious to the farcical. He is a proud director and one of the founders of the Chicago Independent Film Critics Circle and a new member of the nationally-recognized Online Film Critics Society.  As a contributor here on Feelin’ Film now for over two years, he’s going to expand those lessons to current movie news and trends while chipping in with guest spots and co-hosting duties, including the previous “Connecting with Classics” podcasts.  Find “Every Movie Has a Lesson” on Facebook, Twitter, and Medium to follow his work.  (#102)