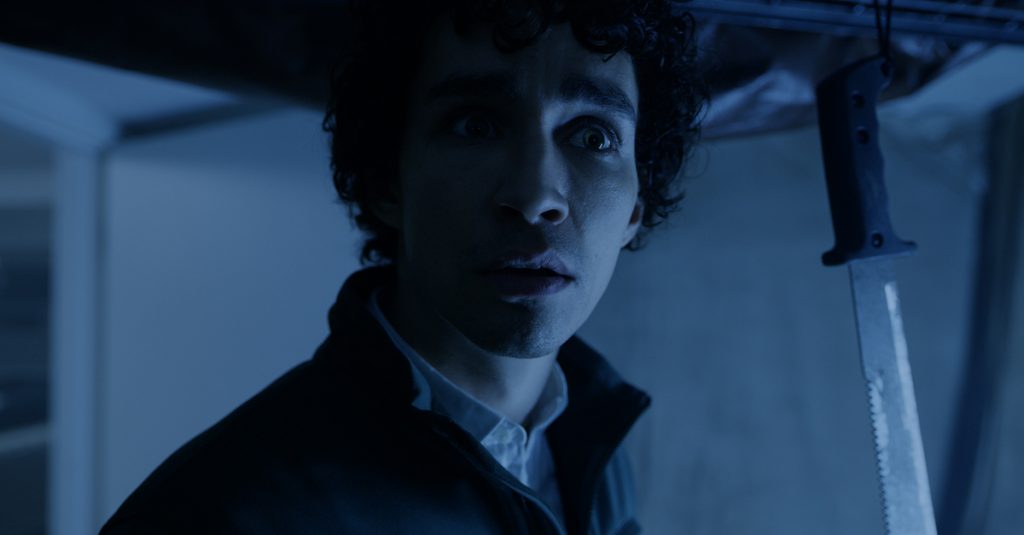 To the majority of his loved ones, Sean Falco (Robert Sheehan) is an aspiring photographer who makes a living running a small parking valet service with his buddy Derek (Carlito Olivero). What they don’t know is that Sean supplements his suspiciously abundant income by using the garage door openers of the cars that he’s supposed to be parking to break into the homes of his customers while they eat. It’s a solid scam that works because Sean and Derek only take a little from each person, leaving the bigger ticket items in favor of smaller pieces that the victims won’t miss. It works, that is, until Sean discovers a young woman chained up in the office of one of the homes he’s robbing. Does risk getting caught while he takes the time to set her free or leave her there, saving his own bacon but leaving him to live with the inner turmoil that decision would generate?

Dean Devlin’s Bad Samaritan is in the running for the 2018 most surprising movie of the year. It’s tight, it’s tense, and I had never even heard of it until I checked the DVD release schedule. While a lot of the edge of your seat action borders on cheap set-ups guaranteed to make the audience uncomfortable (even the worst thrillers can generate tension by having characters be snooping around somewhere they shouldn’t, unaware of how much time they have to escape), the film dares to go add depth by asking moral questions about what what we as humans owe to each other. Would you be willing to do the right thing when the decision to do so could cost you everything? One gets the feeling that the filmmakers are working through this question themselves in the making of this movie. The performances are solid. Robert Sheehan shines as a man dealing with intense inner conflict. David Tennant is creepy as hell as the mysterious stranger hiding a terrible secret. To say much more would be to ruin the surprises along the way, and that’s most of the fun. Suffice it to say that Sean’s decisions place him in some intriguing scenarios that will leave you guessing until the very end.

Bad Samaritan is a solid thriller that makes up for it’s times of generic, manufactured tension with good performances and its thought provoking moral quandaries. It’s the leader in the clubhouse for my most surprising movie of 2018.

Infinity War- We’re a movie podcast, so obviously we did an episode about the biggest movie of 2018 and maybe the millennium. Check that one out here. And don’t forget to check out Aaron’s review.

How to Talk to Girls at Parties- There are some people out there who get John Cameron Mitchell’s movies. If you’re one of them, give this one a shot. Apparently I’m not, because much like Hedwig and the Angry Inch, I just thought this was freaking weird.

Other New Releases: Furlough, Higher Power, Shock and Awe and The Yellow Birds