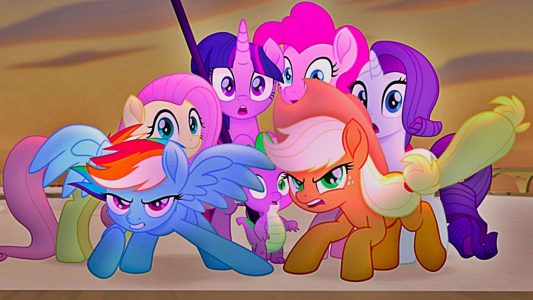 Earth ponies and unicorns and pegasi, oh my! My Little Pony: The Movie has arrived and I could not be happier. For most of a year, my pony-obsessed daughter has been looking forward to this film and no matter what I think of it, seeing her excited over a movie brings joy to my soul. This feature-length film is set in the universe of the extremely popular Hasbro-produced television series My Little Pony: Friendship Is Magic. A dark force threatens Ponyville, and the Mane Six must journey beyond Equestria and get help from new friends to save their home. This movie should be a pretty typical fantasy adventure with lots of comedy, cuteness, and horse puns. I’ll admit that I’ve not watched anywhere near all 163 episodes of the cartoon series, nor am I a brony, but I have seen the show a few times and found it sweet and entertaining. I’m going in with an open mind and expecting to savor the experience of seeing my daughter full of glee. And this film has sea ponies. Sea ponies are cool.

Well, that was unexpected. Come to find out, My Little Pony: The Movie is actually pretty great. And not just for fans, although I can only assume they will be extremely satisfied as well, but for families unfamiliar with the ponies too. I can genuinely say that I had a wonderful time watching this film.

You wants reasons? I’ve got reasons. To start with, this movie feels like a 1990’s Disney classic. This isn’t a film that deals with current cultural issues directly, but rather focuses primarily on one thing – the power of friendship. To be fair, there’s nothing new under the sun when it comes to life lessons. Friends can accomplish more as a team, and trusting each other and utilizing individual strengths is key. But the presentation is as enjoyable as ever and the message still hits home.

Another thing that reminded me of old Disney, and elevated this film considerably, is the music. There are some great new songs and the vocal talents of performers like Sia, Emily Blunt, and Kristin Chenoweth are not wasted. Several of the songs have a strong orchestral component and feel like they could be Broadway stage productions. This was a real bright spot and we found ourselves immediately listening to the soundtrack on the car ride home. In a landscape of animated movies that usually feature over-popified tunes much like you’d find on the radio, MLP: The Movie‘s choice of music stands out as a breath of fresh air.

Another strong aspect of the film is character development. When compared with something like The LEGO Ninjago Movie, which only managed to really give its lead character an arc, MLP: The Movie does a great job of giving four of the Mane (main) Six something to do. One slight criticism is that Fluttershy and Applejack are somewhat lost in the shuffle, but there is enough attention spread out over the rest of the characters that it makes up for that. The newly introduced characters don’t have a lot of screen time, but each is well drawn and enhances the story. An additional plus is that we essentially have a multi-racial cast, all with unique qualities and all working together for the greater good. Hollywood (and Washington) take note.

I’d be lying if I said there weren’t any eye-roll moments, but luckily just a few (one in particular during a joke about cell service that made me cringe). The horse puns are indeed plentiful and hilarious. I laughed a lot and the movie transitions between its emotional beats very well, with the humor never feeling out of place. Also, I now have a favorite pony. Yes… I do. 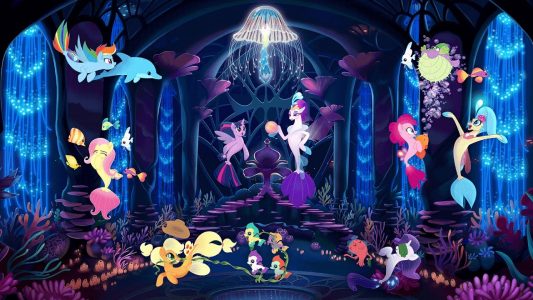 I’ve jokingly poked fun at my daughter for years due to her love for My Little Pony, but now I get it. This colorful, goofy world has a deeper lore than I gave it credit for. It’s beautifully animated and in a different style than anything else on the big screen this year. Friendship matters and My Little Pony: The Movie manages to succeed in telling a familiar story through the use of incredible music and its great cast of characters. I wasn’t prepared to come out of the theater thinking this was fantastic, but here we are. The highest praise I can give may be that I now am anxious to check out the television series and learn more about the world of Equestria. Consider me a convert. If being a brony is wrong, I don’t wanna be right.

My Little Pony: The Movie was AWESOME in every way. The songs are reminiscent of Broadway musicals, and I’ve been singing and listening to the soundtrack ever since I came out of the theater. I have watched the entire TV series and can say that this movie did a great job keeping consistent with the show. Another strong spot of the movie was the introduction of the characters. When they are all first introduced, even the people who haven’t seen the show (like my dad) were able to understand the different personalities of the Mane Six. All in all, this mane-tastic film is one I will remember for a long time to come.