Wes Anderson is known for his colorful, whimsical style of filmmaking, which has earned him legions of devoted fans. His films are almost always beautiful and can be seen as period pieces, since none of them have ever taken place in the present. Thus far, I’ve only found one of his films to be spectacular, and that is Fantastic Mr. Fox. I do feel that should I revisit his films, I might discover myself enjoying them more because my tastes have changed quite a bit in the past few years and I now highly value the kind of technical precision Anderson employs. What I know about Isle of Dogs: it has unique, gorgeous stop-motion animation, is set in a dystopian sci-fi future, has talking dogs, and revolves around a boy trying to find his lost pet. Consider me highly intrigued.

These questions, posed by a dog, to other dogs, are the kind of existential nuggets slid into most Anderson films. Here, there is something particularly powerful about them coming from an animated talking pet, as it really drives home the awareness these dogs exhibit throughout the film. Never does Anderson allow us to lose perspective – a dog is an animal and they act accordingly – but this additional layer of thoughtfulness gives them profound human depth, making it all the easier to emotionally resonate with how they feel. It also encourages us to ask the same of ourselves…

At its heart, Isle of Dogs in an adventure story. The film opens with historical background on the Japanese Kobayashi Dynasty (cat lovers) and tells of how dogs once were nearly wiped from the earth, overtaken by cats, but saved by a young samurai boy. Time passes and dogs become the loving pets we know of today, but then mysterious illnesses such as the Dog Flu and Snout Fever begin to appear and spread rapidly amongst the canine population in Megasaki City. Mayor Kobayashi (Kunchi Nomura) decrees that all dogs will be banished to Trash Island in an effort to supposedly keep the city healthy, but of course the feline-loving empire has other reasons as well.

The first dog to be banished is the guard dog Spots (Liev Schreiber), who was assigned to protect Mayor Kobayashi’s young nephew, Atari (Koyu Rankin). This sets in motion the primary story events, which revolve around Atari venturing to Trash Island to find his beloved dog, and instead coming across a pack led by Chief (Bryan Cranston), that also includes Rex (Edward Norton), Boss (Bill Murray), Duke (Jeff Goldblum), and King (Bob Balaban). As this adventure progresses, Atari and the pack begin to bond, and much is explored about the relationship between man and man’s best friend. Atari never speaks English (and there are no subtitles), but it’s always perfectly clear what he is trying to say. Meanwhile the dogs speak in typical Wes Anderson style, with a dry wit about them, providing most of the movie’s adorable humor. Anderson’s minimalist screenplay really allows the incredible animation and fantastic score to be equally provocative, too. Characters eyes fill with tears on multiple occasions and the sight of it alone is enough to send most viewers reaching for the Kleenex. It’s unsurprising, of course, seeing as how Anderson is known for such detailed work, but at the same time the animation is so mesmerizing that it almost becomes entrancing. There is a style and uniqueness here that not only shows great skill, but really elevates the emotion of the story.

This coming-of-age tale for both boy and dog is also chock full of subtle political and social issues. In a sense the Mayor is deporting an entire race that he seems to hate for no real reason at all, other than he prefers another one. Most of these issues are brought up by Duke in the form of him telling the gang about rumors he’s heard, so while they are effective and can get adults thinking, they’re also woven seamlessly into the narrative in a humorous way. There’s also Tracy (Greta Gerwig), a foreign exchange student who believes a major conspiracy is afoot and is determined to find the truth about Mayor Kobayashi’s actions. Her dedicated efforts may be played for laughs, but she serves as a great character example of what it’s like when someone tries to fight the establishment and challenge what they consider to be poor (or downright evil) leadership.

Isle of Dogs may look and sound like a fun adventure story for kids, but there is some death and there are more complex themes covered. The issues of identity touched on earlier, and how to handle changing responsibilities, are key parts of this story and may go over the head of younger viewers, but they likely will be so enamored with the sweetness of the relationship between the dogs and Atari that they’ll still enjoy it just fine. There are also broken family issues (sometimes between species), as is almost always the case with Wes Anderson films. So, for those who look deeper, Anderson has given plenty to chew on while watching and long afterward.

It’s also important to note the amazing score by Alexandre Desplat. Fresh off winning an Academy Award for his won in The Shape of Water, he once again proves to be a force. Anchored by a traditional Japanese drum-baseline, the music will have you tapping your fingers and whistling all the way home. When Anderson decided to set this story in Japan he smartly brought on writer Kunichi Nomura to help ensure he referenced the culture appropriately, and Desplat’s score seems to fall right in line. 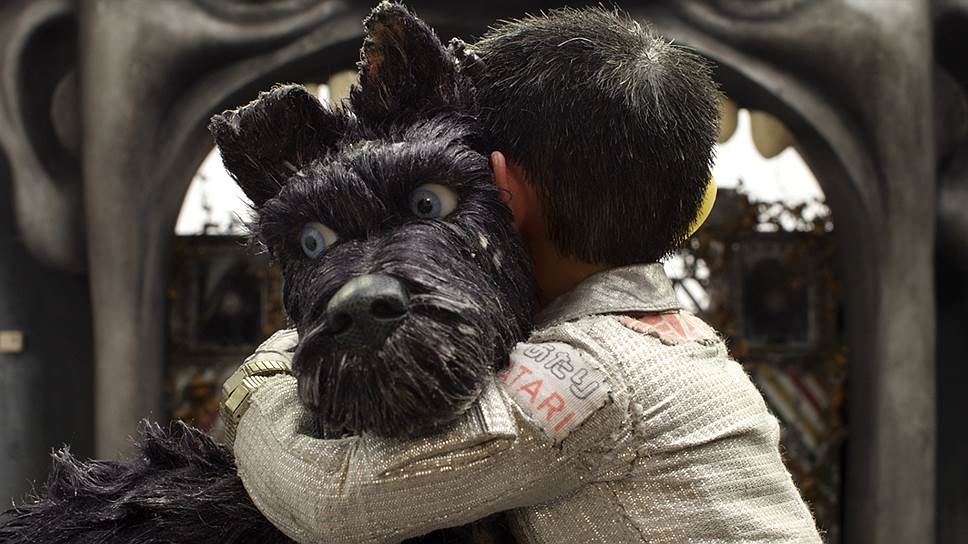 Isle of Dogs is a richly imaginative film, highlighted by playfulness and emotional depth that anyone who owns a dog will easily connect with. It’s drenched in Anderson’s typical style, that is to say technically marvelous, and its brilliant marriage of sly humor, sincerity, and beautiful animation make this an adventure well worth embarking on. It also made this lifelong cat owner want a dog. Well played, Mr. Anderson.