For the second week in a row, we tackle a new blockbuster action film, this one featuring heavy CGI work. We both love Guillermo Del Toro’s Pacific Rim, and a sequel with more giant robots punching giant monsters can’t possibly be messed up, right? We discuss our reactions to and (lack of) feelings for the fun but forgettable Pacific Rim Uprising. Also included are reviews of Wes Anderson’s new stop motion film, Isle of Dogs, and the 1971 Steven Spielberg thriller, Duel.

Giant robots. Giant monsters. The original Pacific Rim is an amazing example of what an incredibly talented (and now Oscar-winning) director can do when he wants to make a movie about playing with childhood toys. The film is so much fun, so I’m all in for more of it. Expectations are set appropriately lower due to this not being directed by Guillermo Del Toro, nor having Idris Elba, but if it can provide half as much entertainment as the first film did then it will be a success. Again… giant robots… giant monsters. Win.

Pacific Rim Uprising wastes no time in setting its tone, opening with a serious sounding recollection of events from the first film and leading into an incredibly comedic introduction to Jake Pentecost (John Boyega). Jake is the son of Marshall Pentecost, the famous leader and hero who led the Jaeger team that closed The Breach, sealing off access to our world by the Precursors. Now that the war is over, and his father gone, Jake is having trouble finding his place, and Pacific Rim Uprising’s emotional focus is primarily on his journey to discover his identity and embrace it. It’s a soft focus, though, as Pacific Rim Uprising is largely a comedy first and action film second, with light dramatic moments sprinkled in for character development.

The story revolves around Jake meeting a young orphan named Amara Namani (Cailee Spaeny) and the two troublemakers finding themselves forced to relocate to The Shatterdome (a.k.a. Jaegar base headquarters, I think). Jake has beef with his former drift partner Nate (Scott Eastwood) to sort out, including some underlying competition for the attention of Jules (Adria Arjona), and Amara must try and integrate with a group of other cadets who see her as an outside who didn’t earn her way into their squad. Big picture wise, the Shao Corporation led by Liwen Shao (Tian Jing) is preparing to pitch a new drone system to the world. This new tech, developed in large part by Dr. Newton Geiszler (Charlie Day), will in theory provide hundreds of drone Jaegers for defense that can be operated remotely from anywhere in the world. Sounds like a good plan, right? Right. Which, of course, means things must go terribly wrong. And so they do.

The important thing to keep in mind about the plot and general comedy-driven nature of Pacific Rim Uprising is that this is 110% stylistically a live-action anime. The characters are over-the-top. Dialogue is cheesy. Acting is pronounced and silly. Reality is often thrown out the window in favor of whatever looks the coolest. Extreme close-ups of single characters talking is frequent. And the action is big, big, big. This is not a typical American action film where drama is the driver and most of the comedy is in quick quips while the action is kept center stage, and so expecting that is going to result in a major letdown. Even those who are fans of the original Pacific Rim may have to adjust to this sequel because it has much more humor and less of a “weight of the world on our shoulders” feel to it.

When it comes to action, Pacific Rim Uprising does mostly deliver what fans want. Four Jaegers with unique abilities and some surprises make for fresh action. Those wanting start-to-finish fighting do get what feels like more action than in the predecessor, and Jaeger pilots don’t hold back until the final moment to deploy their weapons this time around. Unfortunately, most all of those weapons and many of the best action shots were revealed in trailers during the film’s marketing campaign, leaving precious few “OMG WOW THAT JUST HAPPENED” reactions during the film. There is also perhaps a drop in quality of the action scenes. One character in the film suggests that “bigger is always better”, but ironically this may prove otherwise. Nothing comes close to being as powerfully emotional and stunning as the chain sword usage in Pacific Rim. In short, Pacific Rim Uprising seems to have gone with quantity over quality in the action department.

Though there is a lack of strong emotion, the film does have its moments. Jake and Nate’s relationship is a bit like Maverick and Iceman. Jake also develops a relationship with Amara throughout the film and together they provide some of the most affecting scenes. Newt and Hermann (Burn Gorman) reunite, much to the joy of many fans, and their hilariously awkward and sweet relationship offers plenty of laughs this time around, along with a few new twists. The actor’s performances are precisely what the tone and style of the film ask for. Boyega seems to be having a lot of fun playing the snappy, funny, would-be-hero and Scott Eastwood is… well, he’s Scott Eastwood, playing the same character he does in films like The Fate of the Furious and Suicide Squad. And though she isn’t featured heavily, the lovely Tian Jing is fantastic as the smart, strong Shao. 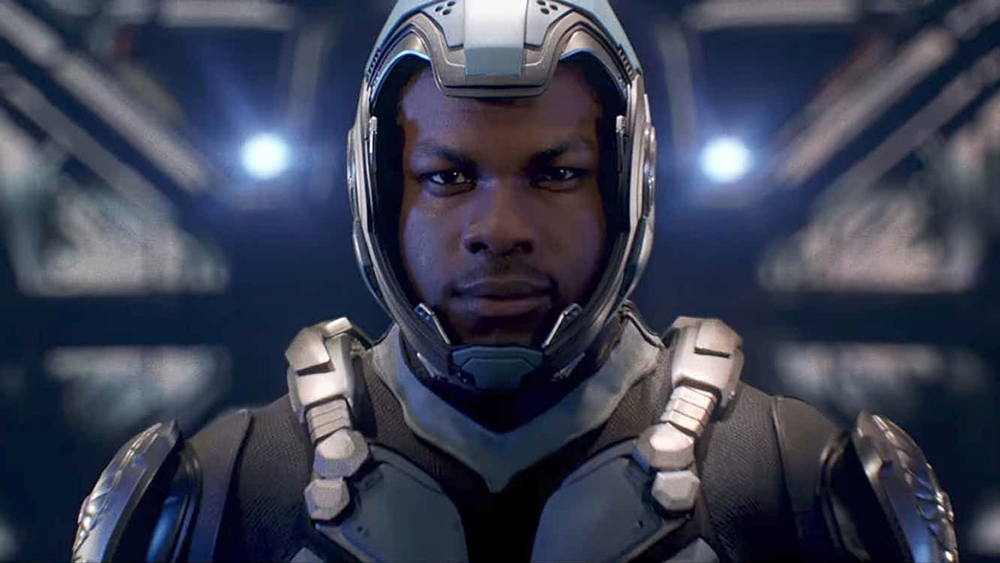 Regrettably, yet not unexpectedly, Pacific Rim Uprising does not reach the mind-blowing heights of its predecessor. In cranking the anime styling up to 11, it loses the balance between epic and cartoon that makes Pacific Rim so great, and a portion of its fan-base that needs things a bit more serious will likely be less than impressed. For those who enjoy this kind of craziness, though, watching the film (especially with a crowd of like-minded fans) is an absolute blast. It may be ultimately forgettable, but its laugh-out-loud humor and robot vs. monster battles still make Pacific Rim Uprising worthy of seeing on the biggest screen possible at least once.