This week, in honor of Veteran’s Day, we are talking what we consider to be one of the most affecting war movies ever made, Black Hawk Down, Ridley Scott’s adaptation of the Mark Brown account of the 1993 Battle of Mogadishu. This episode is a bit more somber than usual because there is nothing funny about this film. It is unflinchingly brutal in its depiction of war and its effect on those who wage it. We have a frank discussion about the ferocity of war, courage, and ultimate sacrifice. 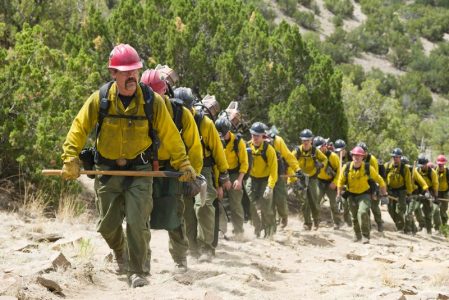 You had me at… Taylor Kitsch. The All-American boy is back. Having already starred in roles as a high school football star, a Navy SEAL, and a Civil War veteran, Kitsch excels at portraying the everyman. In Only the Brave, Kitsch is Chris “Mac” MacKenzie, one of the elite wildfire specialists who made up the Granite Mountain Hotshots. The film tells the story of the Hotshots and how they risked their lives to fight off the Yarnell Hill Fire that threatened to overtake the city of Yarnell, Arizona in 2013. Directed by Joseph Kosinski (Oblivion, Tron: Legacy), and also starring Josh Brolin, Jeff Bridges, Miles Teller, Jennifer Connelly, and Andie MacDowell, this biopic is one of my top five most anticipated movies of Fall 2017. With this collection of talent and a director whose visual style is often spectacular, I’m expecting to be awed and entertained. But this is a true and tragic story, so I’m also hoping to be moved.

Only the Brave is not a perfect film. It has somewhat of a clunky beginning, jumping time periods without much notice as to how long has passed, and the opening quarter of the film is largely spent introducing characters through a series of quick moments. As we flash from one to another it’s not entirely certain how they’ll be connected, or when, but when the film does make that clear it improves significantly. I state these minor annoyances up front because, frankly, Only the Brave is a tremendous film and I’d rather tell you why than nitpick its small faults.

At the center of Only the Brave is its beating heart, Supervisor Eric Marsh (Josh Brolin). Marsh is the leader of the fire crew and embodies the personality traits of the men who put their lives on the line to fight these immensely devastating wildfires. When he is with his men, he is almost always 100% on point, but it’s when he is at home with his wife that his vulnerabilities come through the most. Through this relationship we see the effects that a career spent away from your spouse can have, its emotional toll bubbling beneath the surface of routine pleasantries. Brolin captures this balance of emotions perfectly and commands every single scene he is in. His performance is captivating and the biggest compliment I can give is that for two hours I simply saw Supervisor Eric Marsh and forgot that Josh Brolin was acting the part.

The other primary character in the Hotshot crew is Brendan McDonough (Miles Teller), the newest member of the team and a recovering drug user trying to better his life so that he can care for his newly born (and completely unexpected) child. It is mostly through Brendan’s eyes that we see the other Hotshots and learn about how they live. What Kosinski does that I really appreciate is showing us imperfect heroes. These men make inappropriate jokes, struggle in their relationship, and bully one another. But they are also a close brotherhood who stays in incredible physical shape, are ready at any moment to rush into danger, and have each other’s backs. The firefighters reminded me of my time in the Navy, when for 6-12 months at a time I had no one to rely on but my fellow Sailors. It is a hard life and one that is presented very honestly here, in all its messiness. The Granite Mountain Hotshots accomplished many things and saved many lives during their years of service, but exploring the grounded nature of what their daily routines might have been like was refreshing to see.

As for Kosinski and the visuals of the film, he delivered as expected, but I was also impressed with his restraint. Sure, there are scenes of powerful flames sweeping across mountains and devouring everything in their path, equally majestic and terrifying. There are also great aerial shots as helicopters transport the Hotshots and planes dump payloads full of water onto the burning masses. But unlike Kosinski’s previous films, Only the Brave focuses first and foremost on the men themselves, and in that lies its great impact. By the end of the film, we care about the Hotshots. We care about their futures. We care about their families. And when we care, we become able to respect their sacrifice on an entirely different level. 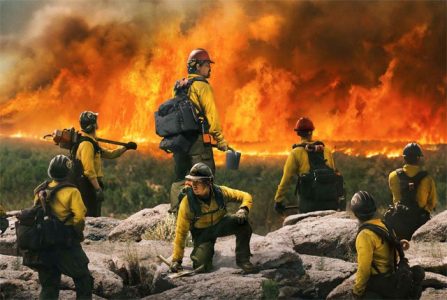 Only the Brave begins with a few flickers, but like a wildfire it catches hold and swells into something so emotionally powerful that it overtakes you in a rush. The determination and sacrifice of the Granite Mountain Hotshots are handled with reverence for what these men put on the line to protect their families and town. This ensemble cast does a fantastic job with Brolin and Teller doing some of their best ever work, and Kitsch and Connelly being memorable as well. To answer the most burning question… Yes, this is the best firefighting film since Backdraft. Be prepared to ugly cry, but definitely see it, because Only the Brave is one of the year’s best films.