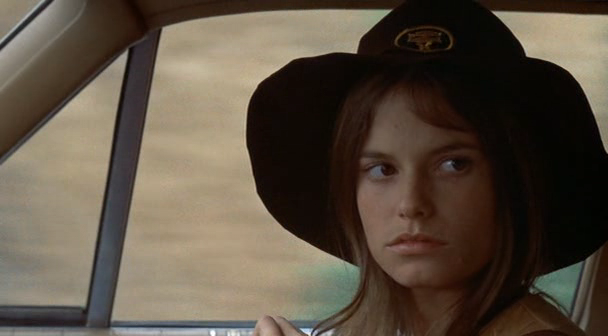 “Breezy, there’s no us. There never could be. Did you really think we could happen into something?” – Frank Harmon
“I thought we already had happened.” – Breezy

Eastwood’s third directorial effort is one of the most atypical for anything in his filmography yet. It was so utterly unlike anything his fans had ever seen from him as to be almost alienating. And while it isn’t perfect, it’s a sensitive and often lovely romance.

Frank Harmon (played by William Holden) is a lonely man staring down the autumn of his life following a bitter divorce. He isolates himself in his work and in the occasional one-night stand. But when a 19-year-old free spirit named “Breezy” (played by Kay Lenz) stumbles into his world, he finds himself opening up to possibilities he’d believed were long behind him. The transitions are not wholly smooth, and his own internal barriers are firmly entrenched, but the pair of them begin a romance flavored with spontaneity, laughter, and the melancholy that can only come with love’s inevitable uncertainty.

Eastwood was approached with the script for Breezy (written by Jo Heims, who wrote Play Misty for Me) with an idea that he might portray Frank Harmon. While he considered himself too young for the role, he felt that he understood and related enough to the story to be able to do justice by it as director. At first glance, the story and tone of the film appears completely unusual given Eastwood’s collection of action thrillers and westerns on which his fame had been built. But when considering the types of characters that he had portrayed already, things begin to appear much more synchronous.

The characters that most frequently populate Eastwood’s filmography (at least through the 60s and early 70s) are primarily lonely and isolated men. The “man with no name”, “Dirty” Harry Callahan, and even the wanderers of High Plains Drifter and Two Mules for Sister Sara are all men who prefer solitude and play by a set of rules which naturally alienate them to the larger community of the world in which they reside. While occasionally these characters have found love or even peace (in Paint Your Wagon or Play Misty for Me) they’re never truly free of the melancholic loneliness which hangs over them like a storm cloud (and indeed Breezy’s nickname for Harmon in the film is “Black Cloud”).

It isn’t difficult to recognize a pattern between those individuals and the character of Frank Harmon. William Holden, synonymous with romances stretching back to the 40s, delivers a nuanced and complex performance. Eastwood’s instincts were likely on point to recognize that he was not yet in a position to portray Harmon because even in his strongest performances, he has yet to tap into the deep and abiding sadness that Holden brings to the role, which is an essential element to making the romance in Breezy believable. Kay Lenz is appropriately naïve and sweet, not to mention lovely, to convincingly enchant both the audience and Frank Harmon. She balances fragility and strength almost effortlessly, showing the early sparks of what would fuel an Emmy-winning career.

While the age difference between the two of them (Harmon is in his 50s while romancing a 19-year-old) is alarming and at times slightly uncomfortable, it is never unbelievable, thanks in large part to the sensitive tone and the strong performances. The film skirts right up to the edge of wearing out its welcome, but always redirects and reconnects the audience just in time with a well-written or powerfully performed scene.

Without the deeply rooted melancholy Holden brings to his performance, the stakes for the romance between he and Lenz might have felt innocuous, even boring. But the romance, as it is instead, is achingly sad and ultimately rather touching. We can feel the longing lying dormant in Harmon to rekindle what he feels he’s left behind him. You can see that he’s tried before with others and has never had the courage to pursue it to fruition, nor has he met someone as tenacious as the free-spirited Breezy. The film even ends on a note indicating that maybe he’s still not quite ready, but perhaps he’s willing to try.

This was Eastwood’s first attempt to helm a straight-forward story in which there are no gimmicks or surprises, just pure character and drama. The film has little to offer the casual Eastwood fan, as there is literally no suspense or action, but to the fan of bittersweet, melancholic romance, Breezy is well worth a look.

“I hope Dave likes what he sees when he gets here. Because that’s what he’s taking to Hell with him.” — Evelyn

Eastwood’s second attempt in 1971 to move away from his stereotypical role was his boldest and most revolutionary career-wise: he stepped behind the camera to direct his first feature film.

He had spent more than 17 years in front of the camera (with nearly 8 of those years in feature films). He had actively learned the processes of production and scripting while leaning on the expertise of directors he admired (most prominently Don Siegel) and felt that he was finally ready to tackle the job himself.

As a first feature, Eastwood was very strategic. He did not want an ambitious war film or even a cop drama or western with their necessary attention to production design and detail. Instead, he chose a very simple domestic thriller, with only a handful of characters and familiar locations, and made Play Misty for Me, which is still regarded today as one of the greatest suspense thrillers of the 70s.

The story is of a radio DJ named Dave (Eastwood) who specializes in classic Jazz and receives a call every night from a fan named Evelyn requesting that he “Play ‘Misty’” for her. When Evelyn tracks him down at his favorite local night spot, the two of them have a one-night stand. The very next week, Dave reconnects with his ex-lover and wants to try to pursue something more serious, but Evelyn has become immediately and violently territorial about her affection for him and she will stop at literally nothing to ensure that Dave is hers and hers alone, even if it kills him.

As a suspense thriller, Play Misty for Me is outstanding. More iconic future entries like Fatal Attraction and even Misery owe a great deal to Play Misty for Me’s premise. Eastwood wisely allows the tension to steadily build rather than try to evoke danger from the onset. Evelyn (played to terrifying perfection by Jessica Walter of Arrested Development fame) begins almost endearingly, as though she were little more than a persistent eccentric. But suddenly – jarringly – she displays outbursts of rage or coercive manipulation. Her shifts in behavior and language are not merely shocking to Dave, they’re shocking to us as the audience, timed with a near perfect cadence for maximum effect. And with each new escalating tactic, the stakes and the threat grow ever more dangerous for Dave and for the people he cares about.

It may not have the cinematic flourishes of other thrillers, but for suspense-lovers, it is a triumph. Eastwood not only manages the directorial duties deftly (adopting techniques and style from his friend, Don Siegel, who plays a small role in the film), but he also delivers a highly compelling acting performance as well. He originally wanted the role to go to Steve McQueen, who it is rumored declined the role because of how much stronger Evelyn’s character was than Dave’s. Following McQueen’s decline, Eastwood decided to take on the role himself and he balances both jobs with the ease of a pro.

As with The Beguiled, Eastwood is again playing a rather vulnerable character, not crippled this time but undeniably trapped and held prisoner by a woman with a sadistic and relentlessly possessive mentality. Eastwood’s excellent balance of disgust, fury, and terror display some of his best range yet as a performer. But unlike The Beguiled, Play Misty for Me was a massive success, both financially and with audiences. It revealed that Eastwood was a director of effective economy: that he could handle the various elements of a film set while still delivering a compelling and effective story and an admirable performance. He would eventually handle much more ambitious material both narratively and thematically, but as a starting point for a directorial career, it’s hard not to be extremely impressed with how effective Play Misty for Me is and how well it holds up nearly 50 years later. It’s an exciting and rewarding entry for suspense fans, and a classic film for anyone else.