Hail to the King… of the box office, at least. James Wan’s undersea adventure fantasy film is earning gobs of cash and has enormous fan support for its unique and bombastic storytelling style. We have our good friend Andrew B. Dyce from ScreenRant.com join us once again to discuss the new DC Extended Universe entry while using as many water puns as we can fit in. An epic film deserves an epic conversation and we think this is one you’ll enjoy.

Additional Music: “Arthur” and “Kingdom of Atlantis” by Rupert Gregson-Williams 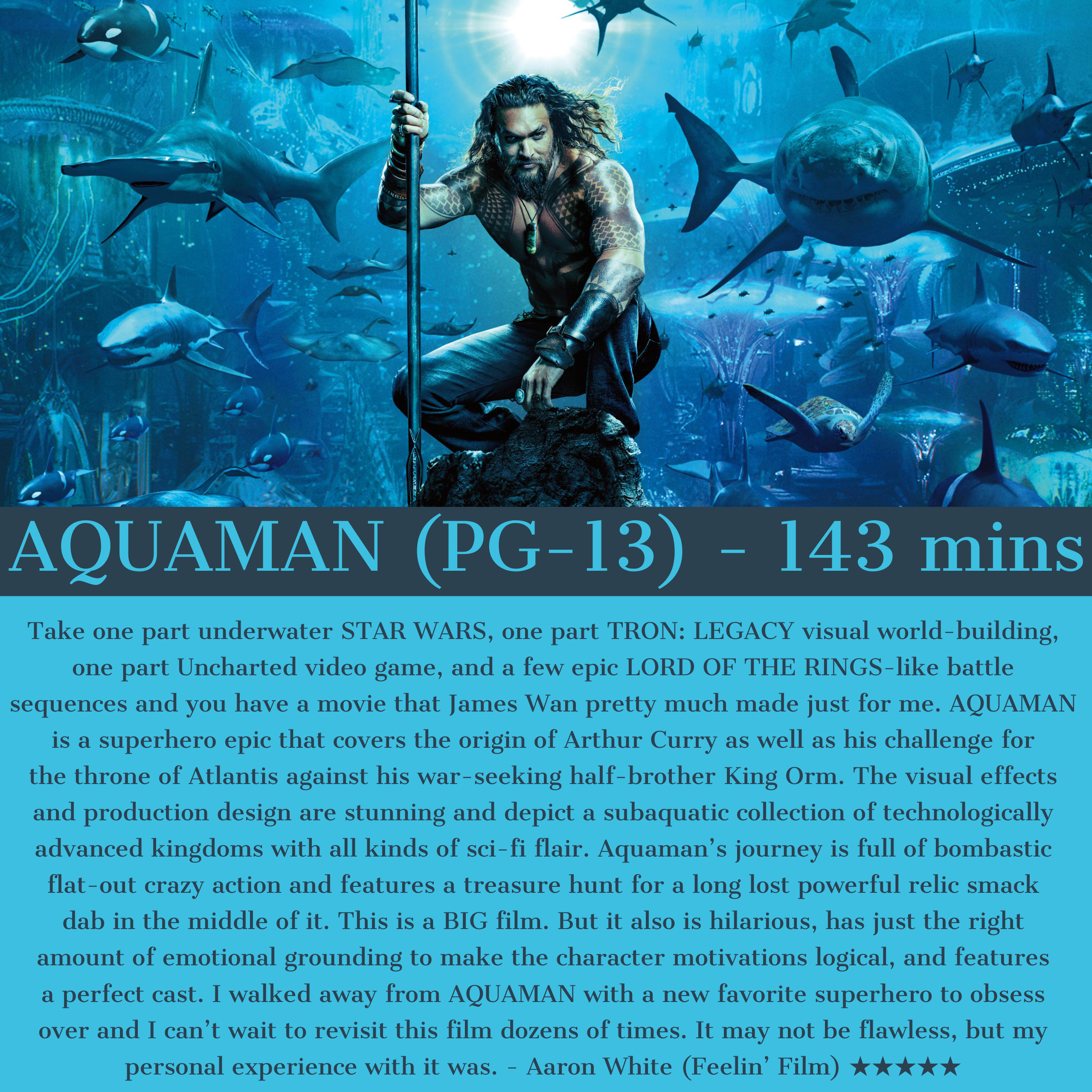 LESSON #1: STATISTICS DON’T LIE, SO WHAT ARE WE GOING TO DO ABOUT IT— Riding the wave of examination and expansion for equality in the film industry, the Annenberg Inclusion Initiative from USC revealed the results of a very telling data study that examined the demographics of movie critics.  To no surprise to anyone paying attention, 78% of the reviews written on Rotten Tomatoes were done by white males.  The news of that data ignited plenty of torches and hushed excuses. At an awards show, Oscar-winning actress Brie Larson spoke wonderfully on those statistics, how they do not reflect the movie-going population, how critical exposure matters (just ask Colin Trevorrow or the notion further expanded by this strong piece in The Lily by Monica Castillo), and how some films are made for certain audiences beyond white males and that fair and matching reviews are needed.  She wasn’t a bit wrong, and I say that as a white male movie critic myself. There is room for more and room for better. The questions become what steps can be made to create a better balance.  One encouraging example is seeing both the Sundance and Toronto Film Festivals designate 20% of their press credential assignments to minorities. We can’t grow film critics on trees, but we can look deeper into the forest and grant more opportunities in that way.  That said, this is still a competitive field and talent still wins. If a minority critic can earn those gets and those publishing spots, more power to them. Competition raises everyone’s game.

LESSON #2: WHETHER WE LIKE IT OR NOT, MOVIES ARE A BUSINESS FIRST AND AN ART EXPOSITION SECOND— First Reformed star and upcoming Blaze director Ethan Hawke appeared and spoke at the Seattle International Film Festival accepting their annual Outstanding Achievement in Cinema award.  The buzziest outcome of that was his quote that movies are “an art form that’s completely eaten by business.”  I know this sparked a lively discussion in the Feelin’ Film Discussion Group on Facebook this week.  This longing for the art to shine over the monetary success comes up often and the wording of my lesson title is my usual reply to that topic or question.  From the day they started charging for tickets to see these things called movies, it was always from then on going to be about the business.  Once people made livings and livelihoods out of participating in this art form, those roots were going nowhere and now they’ve inflated to the millions and billions of dollars pumping through movies.  I know I’ve reached a point as both a mature movie fan and also an experienced consumer (make no mistake, we are all both) where I’ve become more selective with what I’m going to spend my money on and also more appreciative when I encounter something that stands out as the art form underneath the profit potential.  If we, as a collective movie-going public, ever needed to rebel against the business end to demand better from the art standpoint, the only way to do that is hit the industry in the wallet where it counts.  Don’t give garbage your money and every dollar given to a deserving piece of cinematic art supports their cause and future careers.  Indulge in this entertainment with that mindfulness and you’ll be a better viewer.

LESSON #3: DISNEY/STAR WARS WHINERS, BE THANKFUL YOU DIDN’T GET THE FULL GEORGE LUCAS— Likely still rolling in a Scrooge McDuck-level money pit filled with the billions of dollars he made selling off his properties, a George Lucas book quote made news this week because it shared what his post-Return of the Jedi sequels would have been based on.  Take a gander at his premise based on “a microbiotic world” and silly-sounding “Whills.”  Flawed as Episodes VII and VIII may be, if that stuff from Lucas sounds better than the compelling chapters of closure for old favorite characters competing with elevation of new characters from J.J. Abrams and Rian Johnson, then I’m sorry.  You can’t be helped and your inflexibility ruins it for everyone (see last week’s WWLTW because now you sound like those a-holes that bully on social media).

LESSON #4: GET ONE THING RIGHT BEFORE STARTING ANOTHER— I don’t think anyone at Warner Bros. knows what they are doing or how to properly make up their mind, including new DC Films President Walter Hamada replacing comic-connected favorite Geoff Johns.  They now have two Joker-centered films coming down the assembly line, a Jared Leto standalone extending the current DCEU and a low-budget 1980s-set origin story take coming from The Hangover trilogy director Todd Phillips, producer Martin Scorsese, and starring Joaquin Phoenix.  Combine that with the reports that the upcoming Matt Reeves-directed The Batman will be a younger Batman likely eliminating Ben Affleck and you have to ask the WTF questions.  What’s going on here? Are we pushing forward post-Justice League or are we rebooting and trying again?  Both can’t exist credibly. Which one matters more?  Warner Bros. needs to pick a lane and stick with it.

LESSON #5: COMEDY IS THE MOST SUBJECTIVE FILM GENRE, PERIOD— An esteemed panel of film critics (including Scott Tobias, Bilge Ebiri, Brian Tallerico, and Amy Nicholson) collaborated for a list of the “50 Greatest Comedies of the 21st Century” for Rolling Stone magazine.  The results, topped by Christopher Guest’s Best in Show, could not be more all over the place between eclectic spirit and pretentious pandering.  The opening blurb of the article admits humor is a “seriously subjective topic.” Go right ahead and add the extreme hyperbole of “the most.”  This task was impossible without some criteria or metrics, which the list and article gleefully (and carelessly) neglect. The triggers for horror and even drama are so much more universal than the fickle tastes and randomness of comedy.  We may say laughs come easy sometimes but they don’t. Someone’s #1 film is going to be someone’s reviled trash of eye rolls or hate and everyone has an opinion.

DON SHANAHAN is a Chicago-based film critic writing on his website Every Movie Has a Lesson and also on Medium.com where he is one of the 50 “Top Writers” in the Movies category.  As an elementary educator by day, Don writes his movie reviews with life lessons in mind, from the serious to the farcical.  He is a proud director and one of the founders of the Chicago Independent Film Critics Circle.  As a contributor here on Feelin’ Film, he’s going to expand those lessons to current movie news and trends while chipping in with guest spots and co-hosting duties on a podcast every now and then  Find “Every Movie Has a Lesson” on Facebook, Twitter, and Medium.