This week we head into space with Brad Pitt for an introspective, meditative, thoughtful exploration of daddy issues that has moments of action blockbuster mixed in as well. Does this tonal marriage work? Were we able to feel what James Gray was putting down? Tune in to find out. 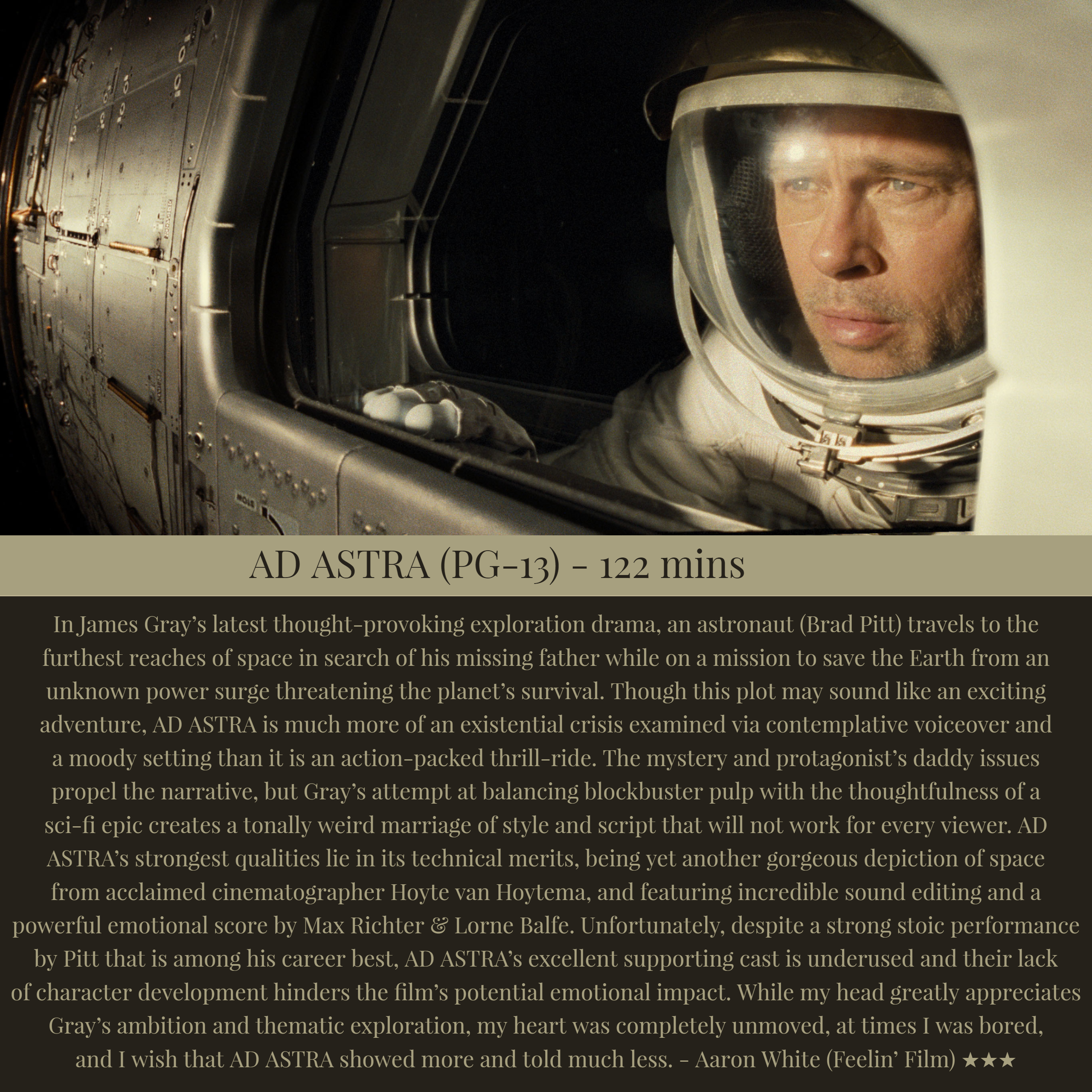 LESSON #1: IN THIS WEEK AFTER THE OSCARS, LET’S COOL OUR JETS ON THE INSTANTANEOUS “MASTERPIECE” LABEL— During the recent awards season, one article stood out for me when it came to talking about “masterpieces,” and those FF Facebook group members out there know how I feel about those.  It preached the kind of temperance I’ve been begging for.  A general editorial discussion by Edward Douglas of The Tracking Board followed the high praise for Black Panther.  Douglas’s article nails it and matches my heart and mind on the topic.  I highly recommend the read.

LESSON #2: NO OSCAR JUGGERNAUT EXISTS GOING ON 14 YEARS— The Shape of Water, despite 13 nominations only won four Academy Awards, including Best Picture at the 90th Academy Awards.  No film has won double-digit Oscars since The Lord of the Rings: The Return of the King at the 2004 ceremony.  The most Oscars won by a single film since was eight by Slumdog Millionaire.  If this was a sport, we would call the trend “parity.”  If this was civics or government, we would call it “spreading the wealth” and “depth of variety.”  I don’t know about you, but I think we need a massive awards winner every now and then to remind us how a truly great film (maybe even a future “masterpiece,” there I said it) can dominate and be the peak of artistic achievement in multiple areas at the same time.  Inflated box office number aside, if the last decade of film feels weak in the prestige department compared t the era before it, the lack of big Oscar winners creates that impression.

LESSON #3: CAN WE TRIM THAT LONG SHOW ALREADY?!— Did you notice the annual Honorary Oscar winners were omitted from appearing on the main show this year?  Remember when legends would grace the stage and preside over the ceremony in the high-end sideboxes?  Go back to this perfect moment of torch-passing and acknowledged respect at the 2002 Oscars when Denzel Washington won his Best Actor award for Training Day on the same night Sidney Poitier, one of his heroes, received his Honorary Oscar:

Moments like that beat Gal Gadot handing out treats to unsuspecting folks watching a movie.  Sure, it’s cute, but it’s beneath the importance of these awards.  I would have gladly traded any and all of the comedy bits and mostly purposeless montages the Oscars telecasts crams down our viewing throats each year for more genuine and unscripted moments like the Denzel/Sidney one.  Now watch Donald Sutherland’s acceptance speech for his Honorary Oscar received at a prior banquet this year.

That’s an Oscar moment better than Helen Mirren rubbing any sexy inanimate object.  Want to make the Oscars better?  Put the magic and emotion back into the show.  Make them important again, not a sideshow.

LESSON #4: POSTSCRIPT, HERE’S WHY THE BOSS BABY WAS AN OSCAR NOMINEE— I didn’t learn this until after the Oscars, but there was a rule change in the nominations process for Best Animated Feature.  The category can now be voted on by any Academy member, not just people from that department or discipline.  Previously, the only award that had that universal voting like that was Best Picture.  This Vox article explains how commercial reach watering down of the category could cause a slow death of independent animation, a small enough niche to be ignored or inaccessible to most general voters.  Keep that in mind next year.  That still doesn’t explain why The LEGO Batman Movie didn’t get the spot given to The Boss Baby.

LESSON #5: THE NEXT AWARDS SEASON STARTS NOW, SO GET TO KNOW YOUR 2019 OSCAR CONTENDERS— Shameless self-promotion, but I love looking into the crystal ball at what movies coming this calendar year will be the ones standing tall with hardware in their hands at the 91st Academy Awards in 2019.  There’s always a Sundance Film Festival darling from January that tours the festival scene all year before a fall Oscar release.  Get Out reminded us that a February release can again make it a year to the next Oscars, just like The Silence of the Lambs years ago.  Will that film be Black Panther this time around?  Well, I’ve got your advance study checklist ready for you.  Here are 19 films to keep an eye on for the 2019 Oscars.  I see you Damien Chazelle and Steve McQueen!  Place your early bets now. 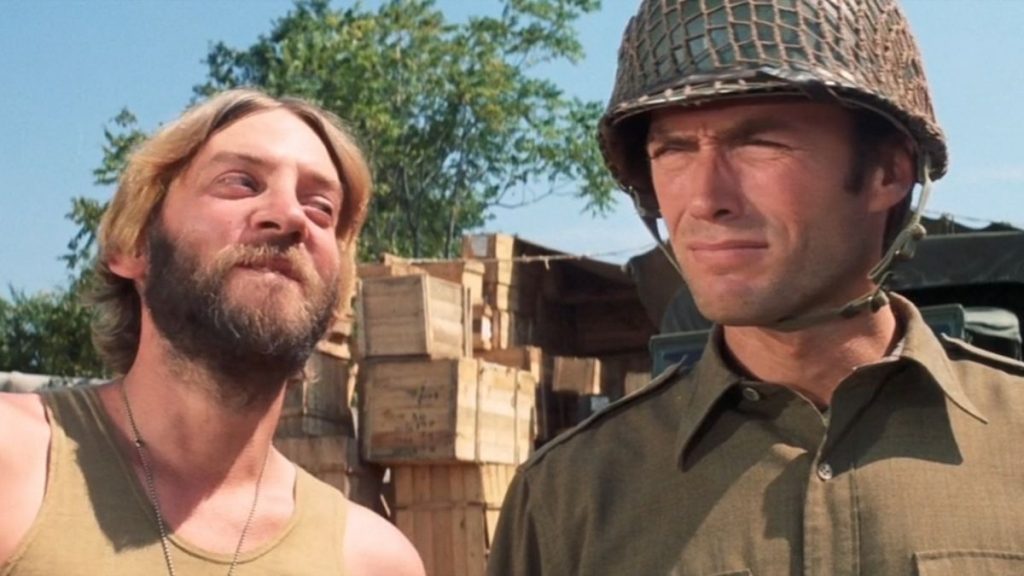 When Eastwood originally signed on to lead Kelly’s Heroes, he did so because it was supposed to be helmed by Don Siegel who, following Two Mules for Sister Sara, Eastwood considered his personal friend and favorite director. However, Siegel was bogged down with post-production on that film and unable to fit the production schedule. Meanwhile, Eastwood was unable to back out of his contractual obligation.

Directorial duties then fell to Brian G. Hutton, who had previously helmed Where Eagles Dare. In a few ways, Kelly’s Heroes is quite similar to that film. it features a troop of soldiers on a mission behind enemy lines, but unlike the weighty and twist-filled Where Eagles Dare, this mission is of a more personal nature and the tone is much more light-hearted and direct.

The 34th Infantry Division are disgruntled, frustrated, and overwrought. Their captain is glaringly selfish and whenever he decides to lead his men at all, he frequently positions them either in the way of harm or of boredom. When Private Kelly (Clint Eastwood) learns from a captured German officer about a bank filled with millions of dollars in gold bars, he resolves to travel behind enemy lines to break in and steal the loot. Enlisting the aid of his fellow disgruntled officers, along with a ragtag group of misfits from other divisions, the group cross into enemy territory and begin a series of adventures in misdirection in an effort to obtain the gold.

Eastwood carries top-billing this time, but he’s a bit dwarfed by the rest of the impressive cast. The cast includes the brutish and intimidating Telly Savalas, the apoplectic and hilariously obnoxious Don Rickles, and – in one of his most delightfully eccentric performances – the hippie-zen-warrior “Oddball” played by Donald Sutherland. The cast also includes Carol O’Connor as a naïve commander and Gavin Macleod as a perpetually furious army mechanic. Eastwood anchors the chaos with a steady and assured performance that is by no means a step backwards, but is hard to find impressive amidst such a colorful and entertaining collection of co-stars.

The film deftly balances some genuinely exciting action sequences with a constant thread of sardonic humor. But it is the most cynical film in Eastwood’s filmography thus far, often criticizing without any subtlety the hazards and pointlessness of wartime conditions. Not only is the mission at the plot’s base a mission of profit and desertion, but along the way, the “heroes” of the title enlist the help of nearly every disillusioned soldier, including at least one Nazi. The cynicism becomes perhaps most apparent when the soldiers – essentially on a bandit’s mission – are mistaken for bold and devoted patriots who are making an advance against the enemy (prompting the joke of the film’s title).

There is an utterly chilling moment when, following a particularly significant victory, a Nazi solider who has joined their treasure hunt instinctively gives the Nazi salute, momentarily stunning Private Kelly into remembering who they were before this mission. Once this shocking instinct is realized, the same Nazi alters his posture into a military salute, letting his mouth drift into a self-righteous smirk. It’s a provocative moment of glaring indictment against the whole enterprise that is unsettling and unforgettable.

But despite these alarmingly biting elements, this film manages to be highly entertaining and paced like a bullet, displaying once again Hutton’s talent for handling wartime mission narratives. It is often laugh-out-loud funny and occasionally poignant. It also contains possibly intentional echoes of Eastwood’s collaborations with Sergio Leone, most noticeable in a climactic scene where he, Savalas, and Sutherland face off against a Tiger Tank in a fashion unmistakably reminiscent of a western showdown. With strong characters, a simple and direct narrative, a steady pace, and a sharp tone, Kelly’s Heroes is an easily recommendable war film, whether you enter it with or without affection for that type of film.