Daniel Craig’s last adventure as superspy James Bond is upon us, so we spend this week discussing just how well his final film works as an individual adventure and as the culmination of a complete arc for the character. We, of course, also talk about new characters, gadgets, action set pieces, villains, and much more too!

December and movie musicals go together like peanut butter and jelly. Did this long-awaited sequel satiate our hunger for enjoyable song and dance? We dig into Rob Marshall’s follow-up to the Disney classic and discuss one of our favorite topics, intertextuality, and whether MARY POPPINS RETURNS is really more of a sequel or remake. 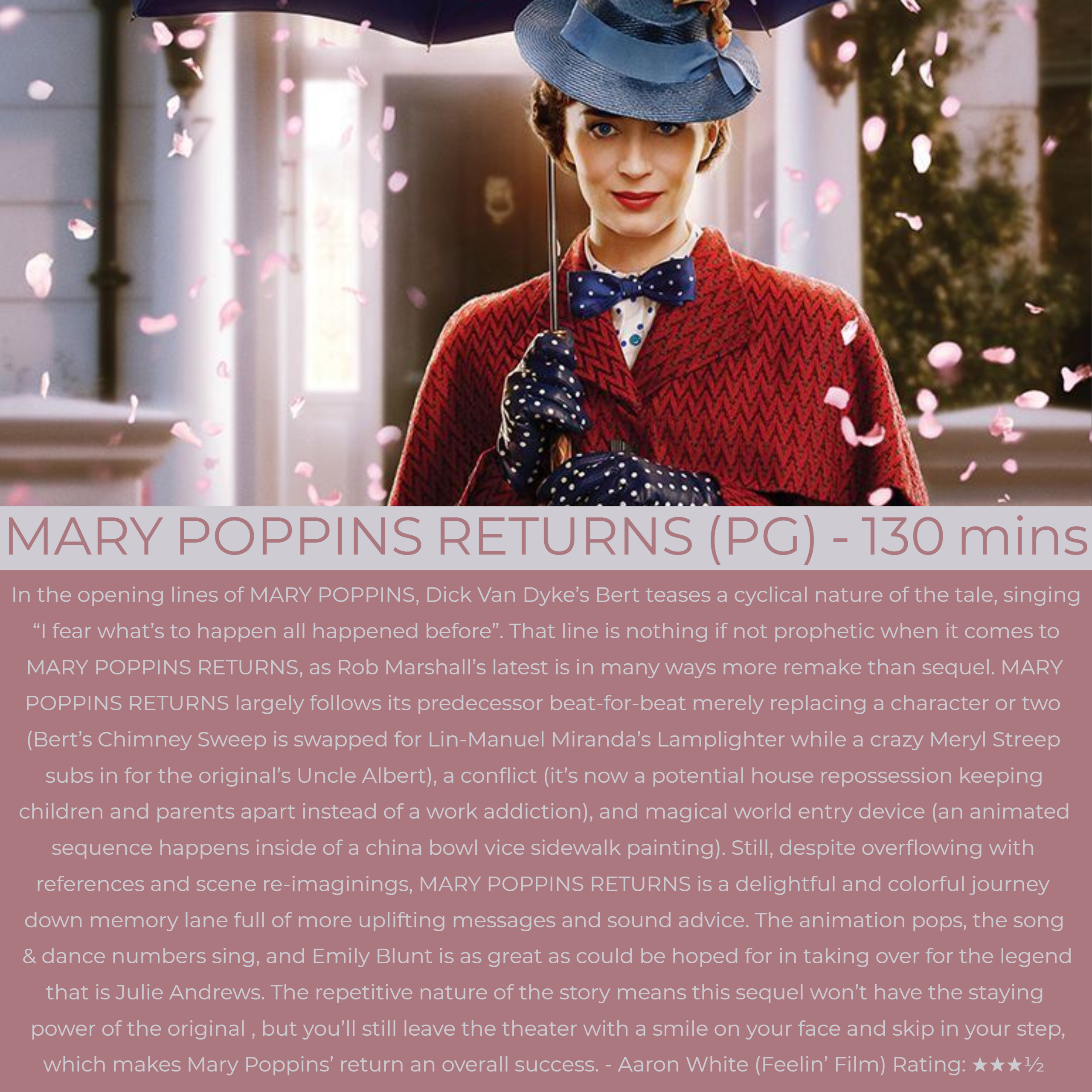 Grab a marmalade sandwich and get ready to smile as we discuss the surprise hit of 2018, a beary special, family-friendly film called Paddington 2. We also chat some about the adorable bear’s first adventure before getting into all of the reasons this sequel has charmed viewers old and young, critical and casual alike. 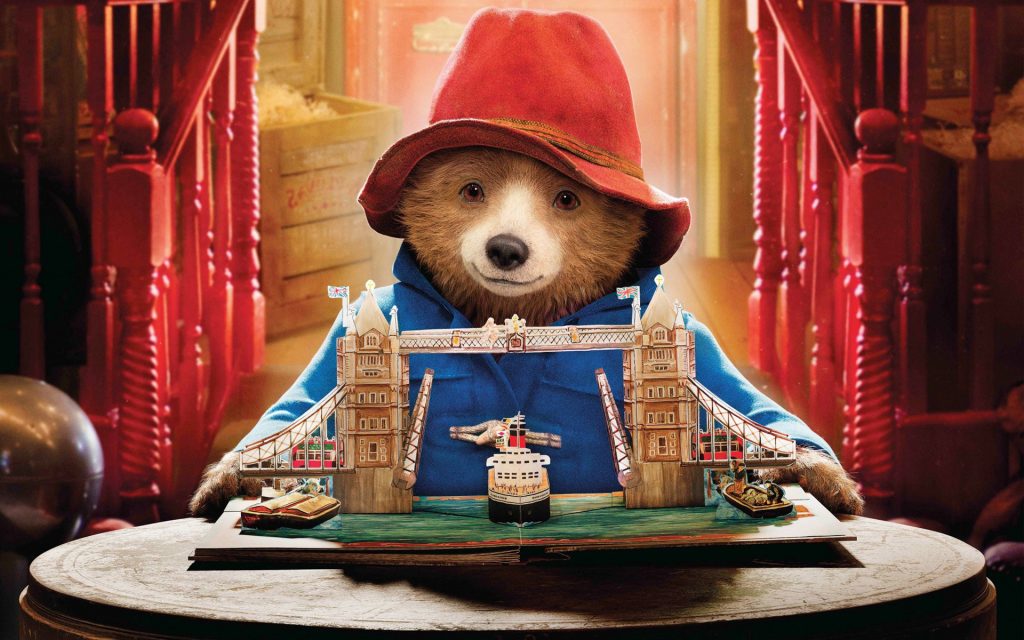 In 2014, a movie based on a children’s book about a talking bear who is discovered in Peru and moves to modern-day London, became an overwhelmingly positive critical success. I’d never have bet on this happening. But it did, and so much so that the British live-action/CGI hit has spawned a sequel. Paddington was recognized for being a warm-hearted family-friendly adventure full of charm, wit, and with a playful sense of humor. It was also filled with gags that made it just plain fun, and my family is excited to see where the immigrant bear’s story goes from here.

Rarely does a film so exceed my expectations that I’m left with a feeling of awe, but my face literally almost broke into pieces from the immensity of my smile as I sat watching one of the most perfect post-credit scenes I’ve ever witnessed follow-up a film so adorable that I wanted to hug it, then see it again immediately. The word awesome may be overused and have a wide range of application, but when expanded to its full definition of something that is “extremely impressive; inspiring great admiration”, it applies perfectly to Paddington 2.

Now with the origin story out of the way, director Paul King is able to show us what Paddington’s every day life in London is like with the Brown family. It still requires some suspension of disbelief to see humans interacting with a talking bear as if it’s routine, but it doesn’t take long to start feeling the joy that Paddington is bringing into the lives of everyone he interacts with and accept him for who he is, and not how he looks. Watching the Brown’s operate as a family is particularly sweet, and each member has their own personal issue of identity that they are dealing with in some manner. Each of these is introduced briefly and King’s ability to pay off each individual family member’s struggle while maintaining a balance of character focus throughout the film is a triumph. As for Paddington, he simply wants to find the best present possible for Aunt Lucy’s 100th birthday, and due to a bad case of wrong place/wrong time he ends up in the most unlikely of places… prison. The rest of the plot takes everyone on whimsical adventures, complete with treasure hunting, plenty of detective work, and hijinks on a train. The film has plenty to say about being yourself, having manners, and looking for the good in others, but it is never distracting and rather genuinely uplifting.

Along Paddington’s journey, one of the characters he meets is former star actor turned dog food salesman Phoenix Buchanan (Hugh Grant). Phoenix wants what Paddington wants and serves as the villain of the film, and boy oh boy is Grant having the time of his life in this role. It’s impossible not to smile and laugh constantly because Grant’s performance evokes these involuntary reactions at every turn. While he doesn’t have the kind of Oscar-worthy moment that is thought of when awards are handed out for best acting work, his consistent greatness in playing this character perfectly should not be overlooked. Also hitting a home run with his performance as Knuckles McGinty, a prison cook, is Brendan Gleeson. McGinty and Paddington enter into a unique sort of friendship that is as much gut-busting fun as it is soft and caring. Paddington is the kind of bear who always looks on the bright side, after all, bringing people together and making the best of whatever situation he is in, and McGinty and the other prisoners find it as hard to resist his unrelenting kindness as audiences do his charm.

All of this is well and good, but what truly raises Paddington 2 to greatness is that it’s not just a wonderful family-friendly story full of laughter and smiles, but also a technical marvel. The blending of live-action and CGI work is really special, never once being noticeable or feeling out of place. The cinematography is always fantastic and often striking with vivid color. Many times I was reminded of Wes Anderson’s work, particularly in The Grand Budapest Hotel, by the way in which a variation of angles were used to frame characters and scenes in interesting ways (usually centered). That color, though, bursting off the screen as if it was alive, added so much to the overall joy of the experience and was a treat for the eyes.

Shocking as it may be to read this early in the year, Paddington 2 is a truly wonderful film that will stand as one of 2018’s best. As the sequel to a great film, this one is even better. More heart-warming, more hilarious, and with outstanding performances by Grant and Gleeson that set it apart from other animated and similar genre pictures. In a world that often gives plenty of reason to frown, Paddington will replace that with pure delight. Take the whole family to see it once, twice, or more. Spending time with this marmalade-loving bear will start your year at the movies off right.