LESSON #1: ROMA IS A DUAL-LEVEL CATEGORY OSCAR CONTENDER— Every so often during the annual awards seasons a foreign language film surges ahead with praise to become a legitimate Best Picture Academy Award contender and not just a shoe-in for its own Best Foreign Language Film Oscar.  Think of Ang Lee’s Crouching Tiger, Hidden Dragon, Michael Haneke’s Amour, and Michel Hazanavicius’ 2011 Best Picture winner The Artist.  Those films are rare and special.  You’re going to see another one this year and that film is Alfonso Cuaron’s Roma.  Stunning, dramatic, and heartbreaking, Cuaron’s love letter to his upbringing just won the Best Picture award from the New York Film Critics Circle as well as director and cinematography, all for Cuaron.  With confidence, expect it to be one of the final five to eight films competing on February 24th next year.

LESSON #2: SPEAKING OF OSCARS, PADDINGTON 2 DESERVES TO BE TAKEN SERIOUSLY— You’ve been hearing Aaron White and I shout the praises of this charming sequel all year.  Both Aaron and me have grand slam 5-star reviews.  If a dramatic foreign film like Roma with few flaws and endless superlatives can be taken seriously as one of the best of the year, so can a spotless family film that has even more built-up appreciation.  Two separate articles this week, one from David Ehrlich in IndieWire and one from Gregg Killday in The Hollywood Reporter, called for due respect in the form of Oscar nominations for Paddington 2.  Killday celebrated the novelty of a Best Picture than can be flat-out enjoyable.  You have to go back to The Artist, The King’s Speech, or Slumdog Millionaire to find partially light-hearted Best Picture winners.  Even they still had their notes of heavy drama.  Ehrlich laid out seven categories where Paddington 2 should have Oscar consideration.  He’s not wrong on a single one of them.  Let’s hope voters have a heart this year.

LESSON #3: A LITTLE LADY NAMED “OLIVIA” MIGHT DESERVE AN OSCAR TOO— The Academy was busy the year trying to bomb developing a “popular film” category (one more time, with feeling, just let Paddington 2 win straight up, end of discussion and need) when they could be making special awards elsewhere.  As stated in our Facebook discussion group, casting and stunts come to mind.  I think a little lady named “Olivia” makes quite a compelling case and she has four legs.  IndieWire blew my mind this week to educate me that the same dog, a female 15-pound West Highland White Terrier, starred prominently in three films: Game Night, Widows, and Insatiable.  Her name is Olivia and she was excellent in the arms of Viola Davis hatching or scheme or getting drenched on blood from the hands of Jason Bateman.  Hand that pooch an honorary Oscar!

LESSON #4: LET THE LADIES CLOSE OUT YOUR “NOIR-VEMBER”— Speaking of Widows, while Steve McQueen’s film makes its theatrical run as a polished modern noir potboiler, turn back the hands of time to a few hidden gems to close our your November noir push.  Chicago-based film critic Angelica Jade Bastien of The Vulture published a dynamite little list of ten female-led noir films for fans of McQueen’s film.  Make it a weekend project to celebrate the end of November.  Let the JustWatch search engine tell you where the titles are available for streaming or rental.

LESSON #1: BE RESPECTFUL OF THOSE WHO HAVE PASSED— Actor Armie Hammer stepped onto a Twitter turd of poor context and optical backlash when he somewhat sounded off on the tone of people’s tributes tributes to the last Marvel legend Stan Lee.  I get what he was trying to say in terms of making sure any tribute is about the departed and not the poster (similar to comedian Anthony Jeselnik’s legendary rant against “thoughts and prayers”).  That counts as fair and good advice, but there’s a gentler way and time to say that then Hammer did, and he caught a good bit of peer flack for it, lead by Jeffrey Dean Morgan. Armie has since deleted the tweets and apologized, but the lesson here remains.  Be respectful even when you’re asking for people to be respectful in return, especially during periods of mourning, reflection, and celebration.  Things have calmed down, but it could have been worse.  Someone could have brought up these unsettled stories.  It’s just a reminder that no one is perfect.  We take the bad with the good.  We do that with Stan Lee and we can do that with Armie Hammer.  Enjoy the genuine article before two actors, one younger and one older, will probably duel over the eventual Stan Lee biopic:

LESSON #2: WHEN IT COMES TO ACTING, POINTS SHOULD BE AWARDED FOR ACCURACY— Bohemian Rhapsody is looking to be this year’s The Greatest Showman, a movie with public popularity and a perception of prestige despite fair to middling critical response.  After the Bryan Singer firing fallout, the studio will gladly take the money, but even they know an Oscar campaign would have boosted that Bohemian Rhapsody bottom line even more.  Outside of costume design or hair/makeup, it’s best chance to make noise is Rami Malek’s outstanding lead performance.  It’s too early know how if they young man has the favor and clout to win, but I he should earn a ton of praise for the exactness of his emulation.  Accuracy impresses me, so you’ve got to see this side-by-side video of Rami matching Freddie Mercury’s moves from the climactic Live Aid concert performance.  I’m sure we’re going to be equally wowed by Christian Bale’s chameleon match of mannerisms in Vice next month, but give Rami some love until then.

LESSON #3: BEAUTIFUL BOY IS NOT ONLY ONE OF THE BEST FILMS EVER ABOUT ADDICTION, IT ALSO IMPRESSES FOR FATHERHOOD— I saw Beautiful Boy last month as the opening night film of the the Chicago International Film Festival and it blew me away.  It was one of the easiest 5-star reviews I’ve ever given, standing out as an outlier on Rotten Tomatoes where my rating is above the consensus.  Finally releasing wide, Beautiful Boy deserves a bigger audience and I will toot its horn all awards season.  If you need a corroborating source after me, this editorial piece from Thrive Global nails the second-level impact spoken by this lesson.  Steve Carell’s remarkable performance and the daddy feels might be better than all the exposure given to the ills of addiction.  I know it’s a rough watch, but seek out this film.

LESSON #4: CRITERION-LEVEL FILMS ARE GOING TO STAY IMMORTAL— I know there was a great deal of artistic trepidation by the shuttering of the FilmStruck service this month happening at the same time as constant decline of physical media.  I referenced that in this very column recently, but let me add this strengthening lesson to it.  Great films will never go extinct and, in a way, we have digital to thank for that after an era of decayed negatives.  There will always be an audience and forum for them because quality is remembered and celebrated.  It might not be FilmStruck, but Criterion will get its own cable channel soon as a potential/temporary replacement conduit to experiencing and discovering classic film.  The company is still churning out new discs.  Combine their brand with the catalog and Kanopy services possible through your local library and you have more classic film at your fingertips than you ever realized.  Put your money into the Criterion channel if you want, but you can do more good supporting public services like the library.  Make sure your tax dollars keep working in the right places. 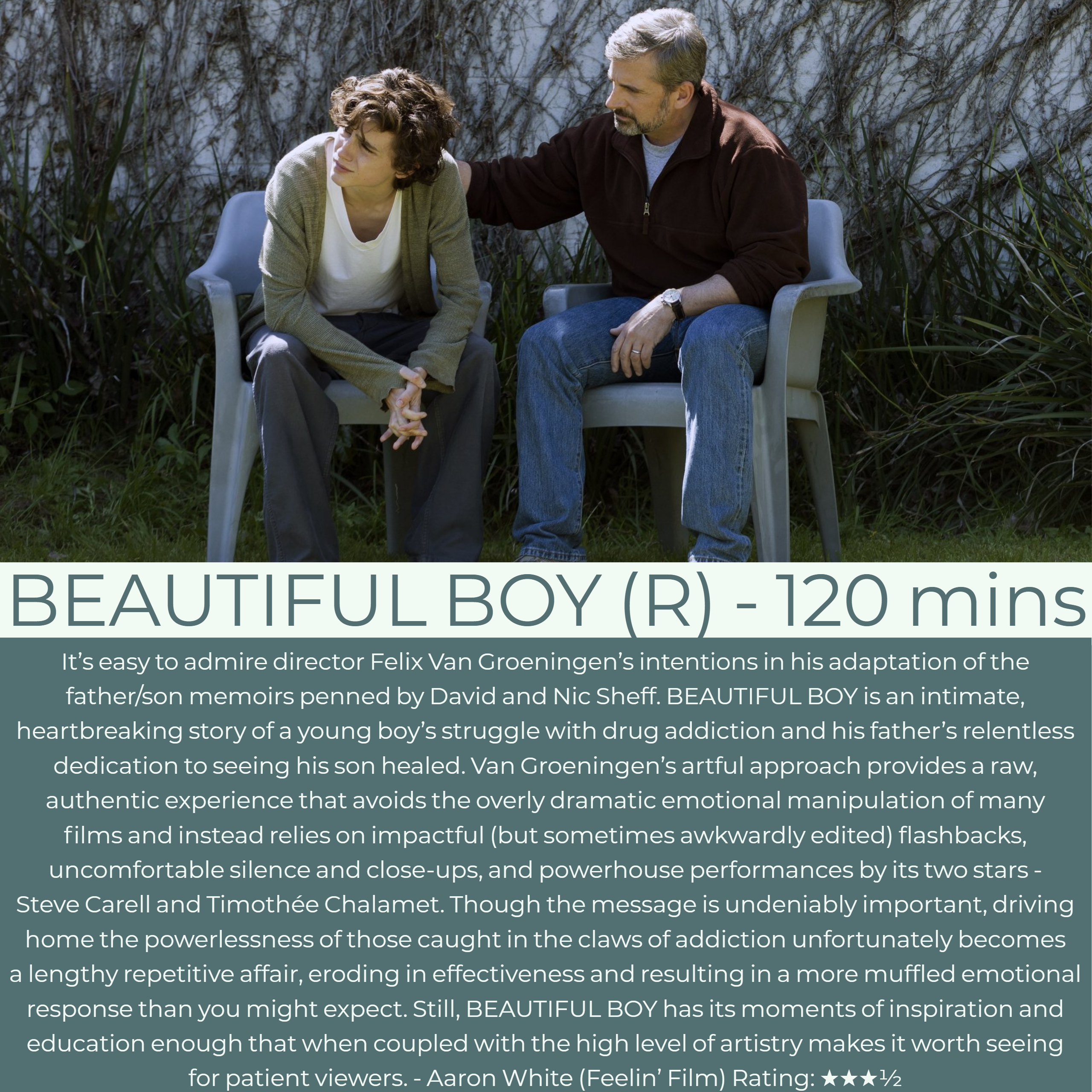