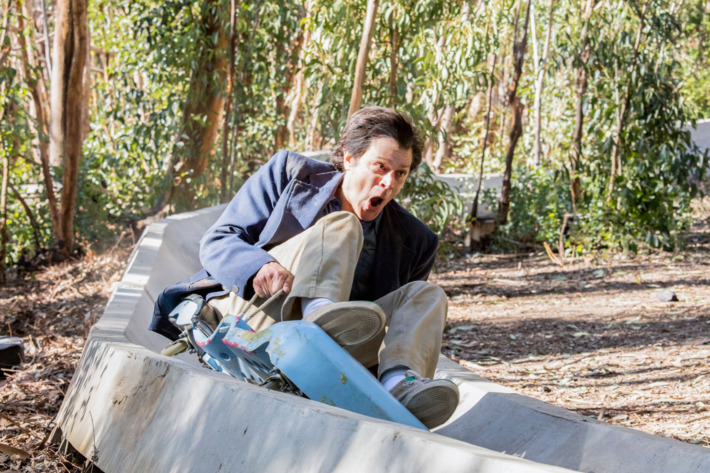 When a corporate mega-park moves in across town, the run-down, play-at-your-own-risk Action Point amusement park is in dire financial trouble. The park’s oddball owner D.C. (Johnny Knoxville), his daughter and his ragtag staff (including Jackass’ Chris Pontius) must find a way to keep the doors open. Complicating matters are lawyers and lawmakers who are fed up with the lack of safety protocols at the once proud establishment.

Don’t let that description fool you. Tim Kirkby’s Action Point is nothing but MTV’s Jackass repackaged with a flimsy plot to attempt to sell the antics of Knoxville and his friends once again. At Feelin’ Film, we like to try to look positively at movies, but I really have nothing good to say about this one at all. It’s dull, amateurish and more than just a little tired. Johnny Knoxville is an enigma to me. He has charisma to spare and has proven himself to be an adept comedic actor in the past. But instead of using that talent, he’s been content to churn out lowest common denominator dreck for almost 20 years at this point. If there’s one bright spot, it’s that it performed more poorly at the box office than any Knoxville starring films to date, so maybe as a culture we’re learning to stay away.

Action Point is a tired and laugh-less comedy from the guy who brought you Jackass. It’s one of the worst movies of the year.

Deadpool 2- I was a pretty big fan of this one when it was released back in May and after watching it again this week, I still am. Read my review here.

First Reformed- One of the favorites of the year so far for a few of our contributors, listen to Don and Aaron share their thoughts about it here.

Show Dogs- Despite starring one of my personal favorite comedic actors in Will Arnett and having the vocal talents of people like Stanley Tucci, this so called family comedy failed make me laugh and was offensive enough that I won’t show it to my family.