How does the old saying go? You can’t choose your family? If you could, it’s hard to fathom why anyone would willingly pick the Walls family. The Glass Castle, based off the memoir of journalist Jeannette Walls, tells the story of a dysfunctional family living way below the poverty line, desperate to find a balance between survival and hope. Held afloat by powerful performances by Brie Larson and Woody Harrelson, writer/director Destin Daniel Cretton (Short Term 12) and co-writer  Andrew Lanham (The Shack) do a decent job in spotlighting  the shocking day to day experience of being a child of Rex (Harrelson) and Rose Mary Walls (Naomi Watts.) But this membership holds no privileges.

The Walls structure their parenting (use that term in the loosest possible way) philosophy around indifference and empty promises. The result is an environment suited to reckless endangerment, emotional and physical abuse, and a disinterest in pursuing any exploit that might better their lot in life. A lot of this neglect is shadowed by a delusion that everything will work out, which only serves to justify their lack of effort and responsibility.  Added to that is the drunken state Rex usually resides in, and the blissful ignorant haze that gets Rose through life. It’s a frustrating and often uncomfortable watch- one that is all too easy to judge from the sidelines- yet one that is peppered with just enough sentimental moments to play with our emotions and rage against our instincts as rational human beings. 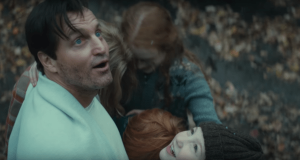 Where The Glass Castle falls short is in its inability to push the boundaries outside the Walls’ family bubble.  Something the book does very well is focus on the societal impact of living in this level of squalor, especially on the children. They are bullied at school. There is a constant fear of social workers intervening. The images the book conjures in your mind are infinitely more graphic than what is depicted onscreen. The film brushes over a lot of that in favor of keeping within the confines of interpersonal family relationships.

Told primarily through the lens of young Jeanette, played with a wide-eyed precociousness by Ella Anderson (The Boss), all of our emotional chips are wagered on the fallout from Rex’s indiscretions and how they impact his family. Promises of one day striking it rich and building a fantastical “glass castle”, Rex manipulates Jeanette with false hope. As his children get older and more wiser to his bullshit, Rex flees deeper into his alcoholism, leading to much darker situations that are likely to leave audience members sickened with disgust. But, throughout all of the hurt and anger justifiably levied against their parents by the children, there is always an air of unconditional love lingering. That’s where a lot of people are struggling to hang their hat.

Because of the focus on Jeanette and Rex, Harrelson and Larson get the lion’s share of dramatics to handle. Harrelson is doing some of his best work here. It’s a role that seems built for his irascible style. Larson continues to prove she’s worthy of acclaim.  Even though she really only gets one “awards worthy” scene, it’s a powerful moment in which she’s able to express Jeanette’s long festering frustration with her parents, and it’s quite satisfying as a viewer that has had to watch these kids go through Hell for ninety minutes. I’d like to say the remaining characters leave an impression, but their moments simply aren’t as impactful. Watts is never given much to do other than hang around in a lot of scenes as the compliant waif to Rex’s aggressions. The other kids are there more or less because they have to be.

So the difficult question to answer is, do the filmmakers sprinkle a bit too much sugar on the film to make it more palatable? Do the arguably criminal actions of the Wall’s level of neglect warrant a mostly happy ending? Most of the critics serving negative reviews I’ve seen seem to want to die on this particular hill. The consensus is that transgressions such as these couldn’t possibly align with themes of redemption and forgiveness.  Admittedly, I’m not sure I would be able to find that level within myself, but it’s easy to say that as an outsider looking in. The book and the film seem to indicate that the power of love is strong within this hot mess of a family. Only Jeanette Walls and her three siblings get to decide whether that’s a worthy ending.