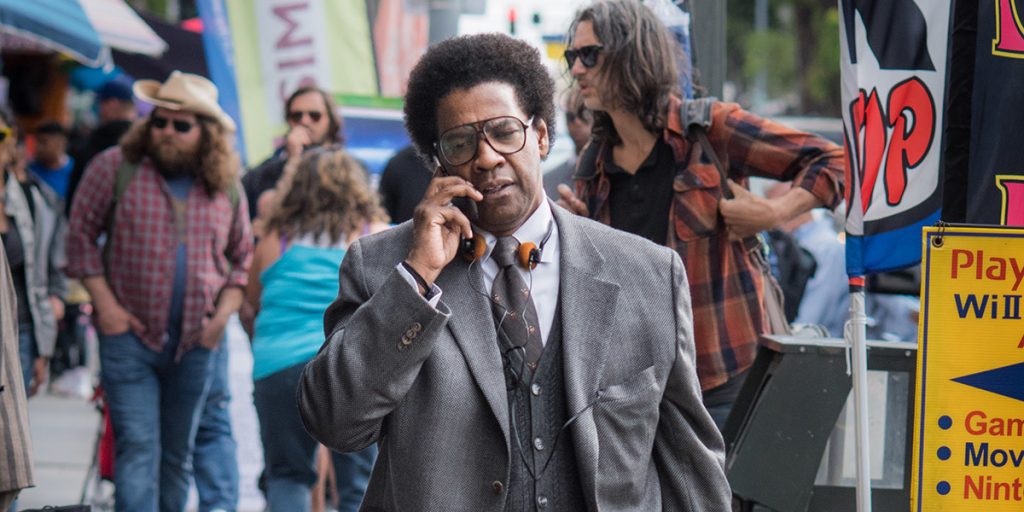 Going to see a Denzel Washington movie is as sure of a thing as there is in the film world. Even when the movies he stars in are sub-par, you can count on his performance to always be top notch. I’ve never seen a performance from Washington that feels phoned in. His performance as the titular character in Dan Gilroy’s new film Roman J. Israel, Esq. is no exception. Denzel is fully committed to the role and even though he’s one of the most recognizable faces in cinema, he’s able to create a character that doesn’t simply feel like Denzel Washington playing a lawyer. Roman Israel is a brilliant legal mind who is admittedly no good in the court room. Having spent his entire career doing civil rights litigation work behind the scenes while his partner was the public face of their firm, he’s suddenly thrust out of his comfort zone when that partner is incapacitated. I’m not a doctor, and it’s never mentioned in the film, but Roman is almost certainly somewhere on the Autism spectrum. Washington gives him a cadence and tone along with distinctive ticks and mannerisms that lets us know it’s more than just a distaste with the court system that has kept him from the public eye all these years. What he lacks in social ability he more than makes up for in legal knowledge. He’s labeled both a savant and a freak by those who witness the extent of his knowledge of case histories, legal precedent and the code of law. He’s an engaging and intriguing character that I’d love to watch in a case of the week style lawyer show, brilliant and inadvertently funny.

The film’s main conflict lies within Israel himself. He’s torn between continuing his life’s work, an almost impossible task given his financial situation and the lack of interest in his services by people that matter, and enjoying the perks that come with “selling out,” which to him means life in a large and expensive firm. He’s pulled in both directions by Colin Farrell, a slick and successful lawyer offering a life of luxury, and Carmen Ejogo, the director of a civil rights non-profit and admires Israel for his years of work in the field.  Both are very solid in their roles, but Farrell stands out. As a former student of Roman’s idealistic partner, Ferrell’s George Pierce is too slimy to love, but too human to despise. It is with great regret, though, that I have to inform that these three solid performances are wasted on a film that is unfocused, uninspired and critically unsure of what kind of story it wants to tell.

When a movie comes out that stars Denzel, I know that it’s something I’m going to see, but it’s not always something I see right away. Flight, Fences, The Equalizer, etc. are all films that I had on my list, but waited to see until I could watch at home. Roman J. Israei, Esq. would have also fit into that category if it weren’t for the fact that it was written and directed by Dan Gilroy (well that, and Movie Pass and not having anything to wake up early for during the holiday weekend). Gilroy’s directorial debut, Nightcrawler, was an outstanding film that was as confident as it was creepy with a great story and career best performance by Jake Gyllenhaal. Unfortunately his sophomore effort suffers from a lack of focus, an abundance of contrivances, and a jarring change in tone for the final 20 minutes of the film.

There are 2-3 different movies happening simultaneously in this one, and a focus on any of these threads could have yielded a much better film. As it is, I found myself alternately confused and bored, spending much of the last hour checking my watch and wishing I had remembered to check the runtime. If you’re looking for a great performance and could care less about how it fits into the larger narrative, by all means, give Roman J. Israel, Esq. a watch. It’s a fine but flawed film that has its moments of intrigue. I’d recommend seeing something else on your holiday weekend though, and waiting on this one until it only sets you back $1.50 at the Redbox.