When you think of video games that would be prime material for a film adaptation, it is usually ones with strong story that come to mind. Rampage is based on no such game, but rather a series which began as a 1986 arcade game by Midway whose primary gameplay mechanic is simply giant monsters smashing buildings. To call this video game narratively sparse would be an understatement. Its world-building is simple: three humans are transformed by various means into monstrous creatures – George (an ape), Lizzie (a lizard), and Ralph (a wolf) – who must raze city after city to the ground before taking too much damage and reverting to human form. Not exactly a lot there to go on when writing a screenplay.

The story of Rampage the film expands on this sparse source material by setting up a world in which power corporation Energyne has developed a weaponized sort of DNA using a genetic editing drug called CRISPR. The film begins in space, where Energyne has its own gigantic private space station on which to conduct experiments, and the opening sequence sets the stage for what will come in more than one way. First, it’s extremely clear right away that Rampage will be a violent film. There is almost a horror-like quality throughout and though it’s full of humor, there is always a dark tone hanging overhead. The second thing this opening sequence tells us is that we can throw any expectations for realistic scenarios out the window as this is going to be a film that doesn’t take its story seriously. Much like the video game it is based on, the narrative here only exists to drive the monsters toward smashing and bashing as much and as often as possible.

The first animal to be accidentally infected by the mysterious drug from Project Rampage is George, an albino ape living in the San Diego Wildlife Preserve. George is a very smart gorilla and has a unique bond with primatologist Davis Okoye (Dwayne Johnson), who has raised him from birth and communicates with him through sign language. When George transforms into a violent genetically-edited rage beast and the government tries to step in and take control, Davis sets off to save his friend in the hopes of returning him to normal. It just so happens that Davis is ex-special forces military, of course, a convenience that certainly helps the plot along. Assisting Davis in his drive to return George to normal is Dr. Kate Caldwell (Naomie Harris), a scientist responsible for helping to create CRISPR who claims to have a cure. The two don’t only have to worry about George’s temper tantrums, though. Also in the mix is Agent Russell (Jeffrey Dean Morgan), representing the government and generally making the situation more complicated. Morgan’s portrayal of the mysterious agent is cowboy-like and quite similar to his role as Neegan in The Walking Dead. It is one of many eccentric performances in Rampage and how you respond to these caricatures will greatly inform your overall experience with the film.

The true villains (outside of the uncontrollable mutated wolf and lizard) are the Wyden siblings (Malin Ackerman and Jake Lacy) who run Energyne. Their performances are wildly over-the-top as Ackerman is chillingly cold, calculated, and intelligent while Lacy plays a buffoon scared to death of being caught and incapable of making tough decisions. Like most evil corporations in blockbuster movies, their goals seem financial in nature and they are willing to do anything to protect their assets.

When it comes to adaptation, Rampage is just about exactly what should be expected. The action is big, brutally violent, loud, frequent, and surprisingly bloody. Several callbacks to the original games exist and fans will enjoy seeing and hearing those. The story is filled with nonsensical decision-making, an absurdly inaccurate portrayal of the military, and plenty of “they shouldn’t have survived that” moments. It also has some heart, though, and viewers will be more emotionally impacted by George and Davis’ relationship than they anticipated. The key in all of this is the consistent undertone of humor throughout, because never does the film take itself too seriously. It knows exactly what kind of big-budget B-movie schlock it is and embraces it with open arms. And for those wondering, yes, there are sexual innuendo jokes because this is 2018 and Hollywood just can’t help themselves. 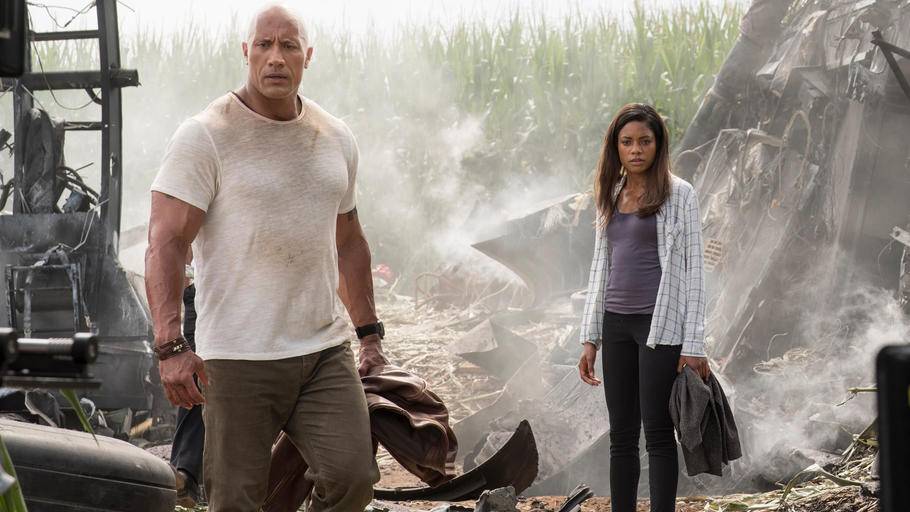 Despite it’s close to two-hour runtime, Rampage feels shorter due to a tight pacing that propels the story forward with frequent intense action. There is absolutely nothing of real depth here, but much like the video game it is based on, the fun is in watching giant monsters destroy stuff. The film is quite horrific with its violence and really pushes against that PG-13 rating, so younger children may be too terrified to enjoy it properly. Teens and adults, however, should have a LOT of fun with the mayhem these giant creatures cause, making Rampage worthy of at least one theater viewing.