In the two years since Star Wars: The Force Awakens was released, it’s been a bumpy ride for my fandom of this once beloved franchise. I thoroughly enjoyed the beginning of this new trilogy, but also found its use of nostalgia to be a bit off-putting. And then came Rogue One, which I did not enjoy much and resulted in me becoming very down on Star Wars and its cinematic future. Thankfully, a recent re-watch of The Force Awakens and the release of the first trailer for Star Wars: The Last Jedi snapped me back to attention and I am now properly excited once more.

So many questions exist that must be answered. How will Rian Johnson fare in the director’s chair and how will the treatment of recently deceased Carrie Fisher be handled? Where is Kylo Ren’s character arc heading and will he evolve into a villain on par with Darth Vader? And who, for the love of all that is holy, are Rey’s parents? The Last Jedi looks amazing, and expectations are sky high. Hopefully not so high that they’re bound to be let down.

A few weeks prior to the release of The Last Jedi, Disney announced that director Rian Johnson would be expanding Star Wars further with a new trilogy. This news sort of tipped Disney’s hand as to how they felt about The Last Jedi because they certainly weren’t going to give Johnson more work if they didn’t like what he’d done in Episode VIII. Well, it all makes sense now, and Johnson has proven that the franchise is in good hands.

The Last Jedi follows a similar path to The Empire Strikes Back, with dual storylines following Rey (who we last saw tracking down Luke Skywalker at his secret hiding place) and the rest of the Resistance separately. But if you’re worried about the film being a beat-for-beat remake of the hallowed Episode V, you can rest easy knowing that it does not do so and instead offers many surprises. It is telling that Luke says, “This not going to go the way you think,” because for (mostly) better and (a few times) worse Johnson twists and turns this tale all over the place, which creates the exhilaration that comes with having no idea what is coming next. After its typical over-the-top opening sequence, Johnson’s film does lag a bit, though, and I felt the overall length more-so than I have in other epics. It’s not that the character development and plotting aren’t important, but it is noticeable compared to the high octane pacing of the film in its second half. And in that second half is where things really shine the brightest as everything and anything can and does happen. The final third of The Last Jedi is as emotionally affecting, gorgeous to behold, and fun to experience as any Star Wars film has ever been.

One thing that really stuck out the most in The Last Jedi was Johnson’s ability to challenge the moral choices of characters both “good” and “bad.” Poe Dameron has to actually deal with the repercussions of his Maverick-esque personality and Finn struggles with being considered a hero. Even Chewie deals with moving on after the loss of his best friend, albeit with a pretty adorable outcome. Many characters are faced with dilemmas that seem easy to solve on the surface but prove to be so much more. I’m not even going to address Rey and Kylo Ren’s arcs because those need to be seen firsthand with no prior knowledge, but I will say that I appreciated where the former ended up more than the latter. One of my disappointments with the film was being left with the feeling that Ren still isn’t a villain worth fearing like Darth Vader. That being said, this is a different story with different relationships in play, and there is much I do like about the complex Kylo Ren.

Acting is solid across the board with Hamill standing out the most. His grizzled, regretful Luke feels very real and sincere. We do finally get to see Supreme Leader Snoke up close and Andy Serkis does his typical great motion-capture work, however the voicing of Snoke sounds a little too reminiscent of Gollum at times and that can be distracting. Also, thankfully, Carrie Fisher’s appearance is handled with the utmost care and respect. She’s not just a side character either, but a very integral part of the the entire film’s plot. One final small criticism would be that the characters are sometimes forced to use very modern dialogue, specifically when the film is being humorous. Many laughed, but I found some lines to just be more eye-roll worthy instead. Luckily these moments are few and far between, nothing that derails the cerebral and intriguing plot. 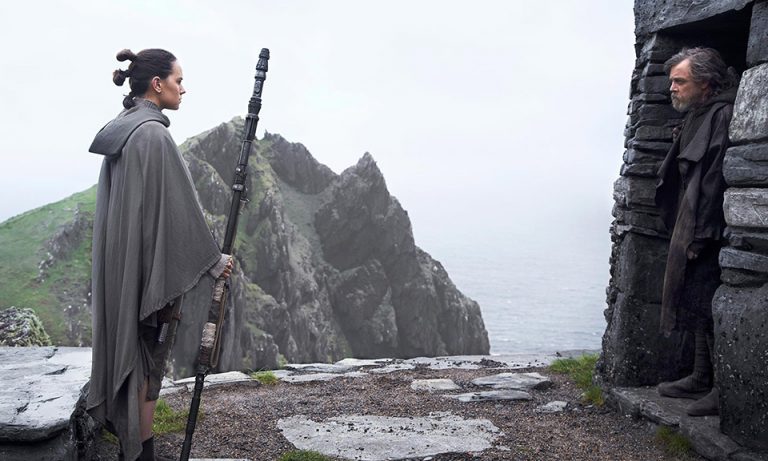 Star Wars: The Last Jedi is a wonderful next step in this new trilogy and one of most epic cinematic space operas since The Empire Strikes Back. Its unexpected plot choices will have fans gasping in surprise, and many emotional moments will cause a lump in the throat or tears in the eye. As Star Wars has always told us, the Resistance (and Rebellion) operate on HOPE. The story here is no different, but our HOPE in Rian Johnson has also been pleasantly rewarded. Whether you like every choice or not, it’s impossible not to respect the filmmaker’s talent, ambition, and passion, especially as the film’s momentum builds and races home to its incredible conclusion. The Last Jedi is a must-see for fans and should be taken in at the biggest theater possible for full effect. See it soon to avoid spoilers, and may the force be with you always.