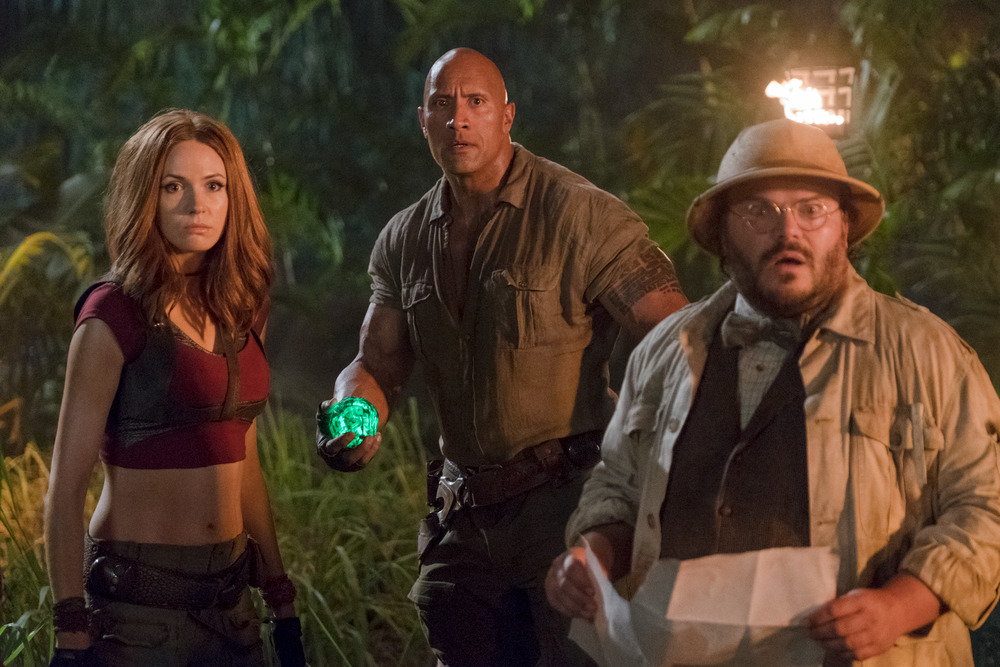 We live in a world of remakes, reboots, reimaginings and rebrandings. Sequels and franchises dominate the box office. If a studio sees any opportunity to squeeze a dime out of something you loved as a child, chances are it’s already in production. While they’re not all terrible, even the best of them are merely well-produced retreads that lack innovation and imagination. But every once in a while, a sequel or a reboot comes along that surpasses its source material with a fresh take that injects life into the property. This Christmas, we’re lucky enough to have one of those rare diamonds in the rough in Jake Kasdan’s Jumanji: Welcome to the Jungle.

Jumanji: Welcome to the Jungle is a standalone sequel to the 1995 hit Jumanji, directed by Joe Johnston and starring Robin Williams, Bonnie Hunt and a young Kirsten Dunst that spawned an animated television series and multiple video games. Boasting cutting edge CGI for its time, the film told the story of four players stuck in the middle of a mystical interactive board game where you win or you die. I’ve been excited for this film for a while due to my fond memories of the original and the casting of Dwayne Johnson in the lead role. Anyone who knows me knows that the easiest way to get me into a theater is to cast The Rock.

The film picks up almost exactly where the original left off in 1996 with the board game being discovered on a beach where it washed up after Robin Williams’ Allan Parrish attempted to bury it in the bottom of a river in 1969. The man who discovered the game gives it to his son Alex who has no interest in board games but is an avid video gamer. The game transforms itself into a video game and after we see some green flashing lights from outside Alex’s window, the film fast forwards to the present day where four high schoolers discover the video game while cleaning out an old storage room and they one by one get sucked into the world of Jumanji. Having been transformed into the bodies of their avatars (Johnson, Kevin Hart, Karen Gillan and Jack Black), the four students must find a jewel that’s been stolen and return it to its sacred resting place before the perils of the jungle take their lives.

If the plot sounds simple, that’s because it absolutely is. There are a couple of mostly predictable twists and turns along the way, but this film works because of the solid chemistry of its cast. Continuing the on-screen chemistry that was forged in 2016’s surprising comedy Central Intelligence, Johnson and Hart play off of each other well and are the source of a lot of the film’s biggest laughs. Jack Black is as funny as he’s been in years as a self-obsessed teenage girl trapped in the body of a middle-aged man. Karen Gillan is perfectly awkward as an awkward teen suddenly trapped in the body of a stereotypical female video game heroine. The four of them clearly seem to be having a lot of fun together and each character is given their chance to shine.

There are a lot of films out there to see this time of year that will be mentioned come awards season. Jumanji: Welcome to the Jungle is absolutely not one of those films. It’s ridiculous and over the top, but if I were making a list of the most enjoyable movies of the year, it would definitely be in the top five. I enjoyed the action, it made me laugh and there was a surprising emotional punch at the end that I didn’t see coming. If you’re wanting to go out with the family* to have a good time at the movies this holiday season, I have a hard time believing that Jumanji: Welcome to the Jungle would leave you disappointed.

*This is a film with PG-13 humor unlike the original that catered to wider audiences. There is some content that might be objectionable to some with younger children. I’m glad I saw it on my own before taking my children who are all under the age of 12.

3 thoughts on “MOVIE REVIEW: Jumanji: Welcome to the Jungle”