The INSIDIOUS series has always been a guilty pleasure of mine. I acknowledge that it isn’t the best horror out there, but I very much enjoy the first two films in this franchise, and due to a strong final act I even don’t mind the third chapter. The concept of The Further and exploring a place where spirits roam while trying to attach themselves to the living is certainly an intriguing one. While James Wan has gone on to make much more masterful horror films in THE CONJURING series, his ability to create atmospheric dread made the series one I could stomach more than the blood and gore pictures in this genre. Admittedly, INSIDIOUS: CHAPTER 3 was a letdown and Wan’s absence was felt as co-creator Leigh Whannell took over directing duties. Now director Adam Robitel is attached for yet another Lin Shaye led sequel. It’s not unheard for little known horror directors to surprise with a good film, but it is rare that fourth entries in a horror franchise ever live up to their original material. I’m going into this one with pretty low expectations and hoping to be pleasantly surprised.

INSIDIOUS: THE LAST KEY begins with a flashback to a young Elise (series star Lin Shaye) living in her home on a prison campus. This insight into her childhood family dynamic and living situation immediately sets the stage for what will be her most personal haunting experience yet, when she returns to this childhood home much later in life to face off against a sinister demon. The details behind this particular occurrence are fairly dark in nature and the plot gets even more serious as it progresses. It’s actually somewhat shocking that the film maintains a PG-13 rating with the heavy content, but like other films in the series it does shy away from blood and guts, relying more on jump scares and atmosphere to provide the audience a sense of fear. Those scares are hit or miss, with a few genuine moments of surprise but many more of the telegraphed typical horror film variety. While some scenes may give audiences a quick jolt, the film never creates any lasting feeling of terror.

Returning to pen this entry (as he did the previous three) is series co-creator (and director of INSIDIOUS: CHAPTER 3) Leigh Whannell. Whannell also stars in the film as Specs, part of the sidekick ghost hunting duo that provide technical assistance to Dr. Elise Rainier. You may notice the wording used in that last sentence and find it odd. After all, Specs and Tucker have never been the focus of any previous INSIDIOUS installments, but rather provided important brief moments of levity to give audiences a chance to breathe and have a break from the tension. One of the major problems with INSIDIOUS: THE LAST KEY, though, is that Whannell has taken Specs and Tucker from fringe supporting characters almost all the way to centerpieces. In a trend that began with INSIDIOUS: CHAPTER 3, their screen time has increased and so have the one-liners and goofy actions. Because of their frequency this makes the film feel like almost half comedy. Instead of the jokes being used as levity, they are gags that bring attention to these characters, taking the audience out of the tension built up. It’s almost like two guys from a buddy cop comedy got dropped into this horror movie. It feels very, very weird. Whannell also really gets lost in his story, and as it gets deeper and darker it also becomes more convoluted. There are some really interesting ideas, but he just doesn’t deliver them in narrative form in a crisp understandable manner. The time travel element that takes place in The Further, in particular, has never been explained well and is no different here. Understandably there is some disbelief that must be had to accept the fantastical nature of the spirit world in the INSIDIOUS franchise, but the decisions here just take that further (pun intended) than most viewers are going to be willing to go.

Also disappointing was Robitel’s male gaze as a director. This is something that I have only recently started to notice, but did so multiple times in this film and one particular scene is an egregious example. It’s because of this scene, which focuses the camera up close on a female’s heaving chest for nearly 30 seconds as she lays on the floor gasping for breath, that it became hard to take the two new young female characters very seriously. So little devotion is given to developing their characters and in the end they are simply a plot device and object of desire for Specs and Tucker. Robitel does manage to create solid atmospheric fright at times. His framing of character faces within scenes where action is taking place in the background was something that stuck out as a positive, and the opening section of the film was quite strong as well. Additionally, the demon design and way in which it attacks is unique and scary, even if it does move a bit like The Crooked Man from THE CONJURING 2. 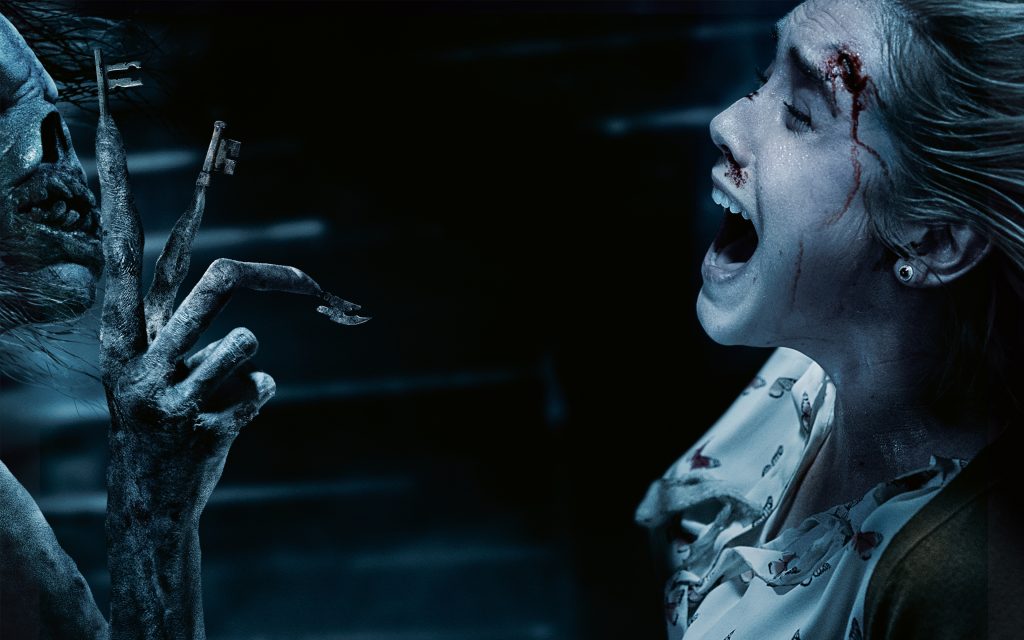 Continuing the downward spiral after a solid first two films, INSIDIOUS: THE LAST KEY deserves to be locked away and forgotten. Whannell’s script puts way too much focus on himself and his comedy sidekick, while also taking a strong opening idea and making it so complicated that its difficult to take seriously. Robitel’s direction isn’t all bad, and the physical atmosphere is appropriately creepy, but the objectification of two younger female characters is hard to ignore. The INSIDIOUS franchise under Wan’s hand was great, but it has now lost the focus it once had and it’s time to use THE LAST KEY to close the door on these ideas for good.

One thought on “MOVIE REVIEW: Insidious: The Last Key”