“I was going for something subtle,” Casey (Haley Lu Richardson) says to her mother while discussing a dinner recipe. This line, spoken early in the film, informs us of what video essayist turned first-time director Kogonada has planned, and is one of the films many moments of self-awareness. The film hardly even has a plot. Two people meet (as strangers sharing a cigarette) and talk (mostly about architecture and sometimes about themselves). Kogonada’s focus isn’t on what happens to the characters weeks or months down the line, but rather on capturing everyday moments between them. During a conversation between Casey and co-worker/semi-romantic interest Gabriel (Rory Culkin) about how individual interests affect attention spans, the latter even says “Are we losing interest in everyday life?” Columbus is a quiet introspective, made for viewers who wish to observe, think, and feel. For those who want to stop and smells the roses.

While Casey and Jin (John Cho) are the two primary characters of the film, at its heart is architecture. Columbus, Indiana is known for its stunning modern designs and Kogonada ensures that we are given a wonderful tour with many highlights which results in some of the most beautiful imagery in a film this year. Every building, from the public library where Casey works to a tall-spired church to bridges and archways and walls made of glass, inspire the conversation. They are as much a part of the narrative as they are a backdrop. The detailed nature of discussions is at times informative and points to a filmmaker who understands the artistry of these unique designs. 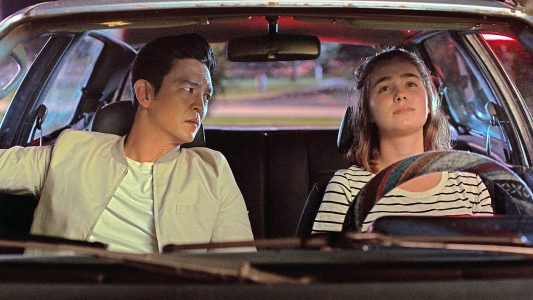 Cho is fantastic as a resentful son who doesn’t wish to be present for his father’s potential death. He holds a strong grudge against the man, an architecture expert, who prioritized his work over his children. It is ironic then that Jin should meet Casey, a young woman fresh out of college who is obsessed with the very thing that his father’s love of caused so much hurt. Jin also is tired of his native Korean traditions and would give anything to be rid of them, while Casey won’t stop taking care of her recovering addict mother despite dreaming of leaving the city for college. This is a lonely pair of souls looking for a spark, but their bonding occurs slowly and naturally. They are drawn to each other through conversations and intelligence. In a world where romance is overshadowed by “hook-up culture,” the innocence of their relationship is refreshing.

Richardson, I must say, is a revelation. Her previous roles in The Edge of Seventeen and Split both showed talent, but she was overshadowed by incredible lead performances by other women. Here she trades charisma and screen presence for a world-weary look as a young woman smarter than her circumstances allow her to show. She can really act and her star is definitely bright.

Columbus, as much as any film in 2017, made me feel. The passion of its director is evident in every frame. Cinematographer Elisha Christian drew me in through gorgeous cinematography underscored by a soothing ambient electronic score by Hammock, and the subtle yet brilliant performances by Cho and Richardson anchored me in this world of theirs that I did not want to leave. Its visuals may get the lion’s share of attention, but this is a complete package, a unique and moving experience that will linger in your thoughts if only you pause and give it your full attention.