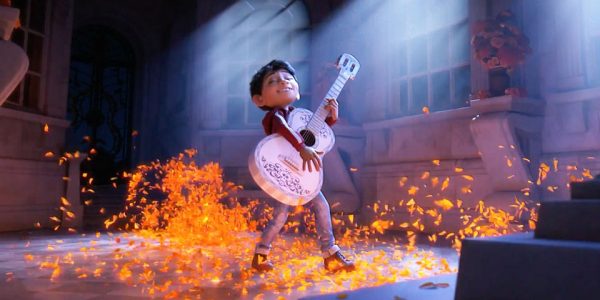 Pixar is back at it with another original film, and their track record for such is pretty amazing. Not to be confused with 2014’s Book of Life, despite a very similar look and story, Coco tells the tale of aspiring musician Miguel  as he teams up with charming trickster Hector on an extraordinary journey through the Land of the Dead. With Coco, Disney/Pixar are delving deep into the culture and traditions behind Día de los Muertos. This is particularly exciting because this Mexican holiday is not often explored in cinema. At the very least, I expect Coco to be fun, colorful, and heartfelt. Pixar has set its bar for excellence high when producing original works and I’m excited to see what visual treats they have in store.

These two words resonate throughout the beautiful, vibrant adventure that is Disney Pixar’s Coco.  In Mexican culture, Día de los Muertos (Day of the Dead) is a multi-day holiday that focuses on gatherings to pray for and remember friends and family who have died, and to help support their spiritual journey. One of the traditions around this is the creation of an ofrenda in each home (a special altar composed of pictures or tokens that commemorate one’s deceased loved one). According to the story of Coco, if the dead are represented on the ofrenda then their spirits may pass over once a year and visit their loved ones that remain in the living world. So while remembrance is especially important for the living, to the dead, being remembered is what they “live” for.

At the center of Coco is twelve-year old Miguel (Anthony Gonzalez), a young boy with music in his bones. Unfortunately for him, his great-great-grandfather left his wife and child to pursue musical dreams, and the family abandonment has never been forgiven by Miguel’s relatives. Miguel’s family blames music and will not allow it to be a part of their lives. The only family member that is not strongly opposed is Miguel’s very old great-grandmother Coco, and he feels a connection to her unlike the rest. Eventually, Miguel’s pursuit of his musical dreams results in antics that lead to him ending up in the Land of the Dead where he teams up with Hector (Gael García Bernal) and goes on a journey to find musical legend Ernesto de la Cruz (Benjamin Bratt), who he believes to be his great-great-grandfather.

Throughout Miguel’s journey, much is learned about Día de los Muertos. Coco serves as something of a love letter to this unique cultural holiday and is an important history lesson for those not familiar with it. I knew very little about it myself aside from the parades I’d seen represented in movies and the typically seen calavera (known to most by the term “sugar skulls”). This aspect of the film was by far the best part of it for me, as coming out of I felt a new appreciation for something I’d never understood. Directly after my screening of Coco, a Hispanic father tapped me on my shoulder and asked what I thought of the film. I explained how intriguing the cultural history lesson was and he told me that he was so pleased by the representation of his life on the big screen and that he was very glad I now had more respect for traditions that are so widely misunderstood. This interaction confirmed that Pixar’s film has extreme value for the people it depicts, which is further evident in its setting of Mexican box office records.

As an adventure story, though, Coco never becomes great. There are themes here about pursuing your dreams, not being too controlling, listening to your elders, the power of music, and also heavier spiritual topics surrounding life after death. But despite some cute animal sidekicks, a fun banter-filled relationship between Miguel and Hector, and beautiful animation, there is just nothing very memorable about this Pixar tale. Yes, our protagonist and others learn lessons that better them, and its entertaining to watch the journey unfold, but a few days after seeing it you will likely have forgotten character names and specifics. There are also no memorable songs aside from “Remember Me,” which to be fair isn’t something Pixar typically focuses on, but with this being a film all about music would have enhanced it quite a bit. Authenticity is important, however, and the songs we do have feel very much like they belong. At times the lyrics and dialogue in the film alternate between English and Spanish. With no subtitles, I didn’t always understand fully what was being said, but the meaning was conveyed and I appreciated this little attention to detail and lack of catering to only an American audience. 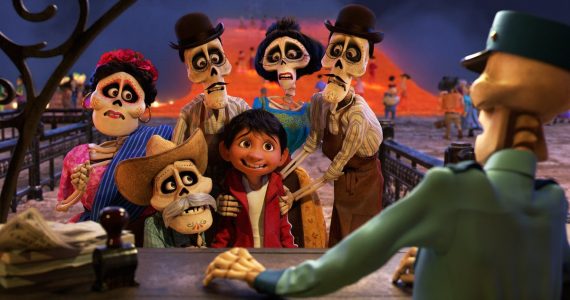 Coco is not Pixar’s best film, so don’t expect to be blown away emotionally. It is, however, a perfectly fun, fantastical adventure wrapped in an incredibly important history lesson of a culture most are not familiar with. Coco will likely resonate more with those it represents and that is a wonderful thing. It’s also the kind of film that will give you something to discuss with your children and help expand their knowledge of the world and people in a meaningful way. Not every movie is going to be “play the Blu-ray on repeat” good. Coco certainly isn’t, but it’s worth seeing once.