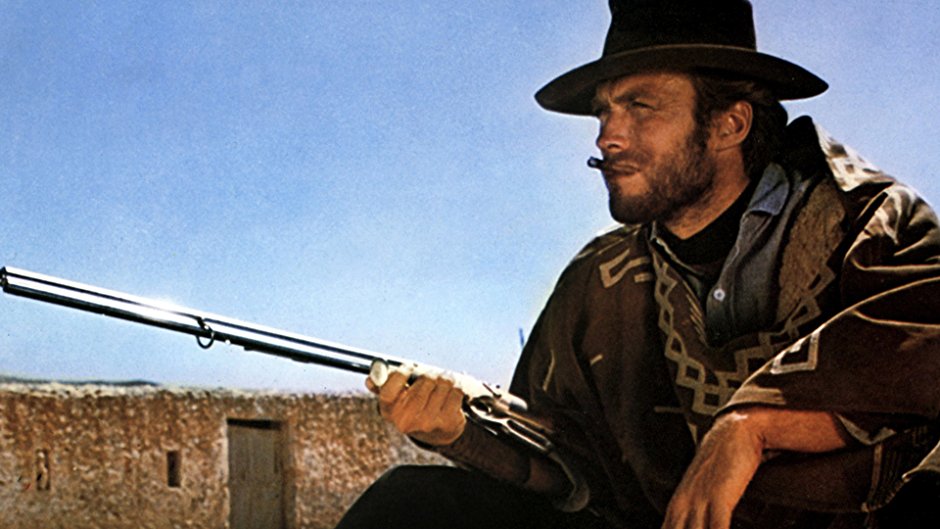 “Where life has no value, death, sometimes, has its price. That is why the bounty hunters appeared.” – Opening caption

The sequel to the landmark Italian western A Fistful of Dollars is more ambitious and often more rewarding than its predecessor. Sergio Leone had struck gold with A Fistful of Dollars and he hastily began coordination for a sequel (albeit with new producer, having fallen out with Jolly Films who produced the original). However, Eastwood was reluctant to return to his role because, at the time he was approached, he had not yet seen the first film. A print in Italian was rushed for him to view and, after screening it with a few friends, Eastwood agreed to return for the sequel.

Interestingly, despite the trilogy coming to be known as the “man with no name” series, Eastwood’s character is definitively given a name in this film: Monco. This was largely due to a lawsuit brought by Jolly Films saying that they owned the character from A Fistful of Dollars (the title itself is a subtle jab at that studio: For a Few Dollars More).

Having so recently closed work on the original, Clint Eastwood’s confidence is fixed and his focus is tight going into For a Few Dollars More. He commands the role with much more assurance and his interpretation is more complex and subtle. It adds no small measure of assistance that he is formally playing off a comrade throughout the latter half of the film. Lee Van Cleef, playing the role of Colonel Douglas Mortimer (a role originally offered to Charles Bronson), is arguably a more prominent character in this film than Eastwood’s Monco. The film opens with Mortimer, and the final moments reveal more crucial stakes for Mortimer’s character in the outcome of the narrative’s events.

The story this time is that two bounty hunters (Cleef and Eastwood) are pursuing the same man and his gang of bandits. Seeing little chance of either one of them overpowering their prey’s gang alone (and following a fantastic sequence in which they observe each other’s skills with a gun) they decide to join forces and share the profits. What follows is pretty straightforward cat-and-mouse western gunslinging, with the upper hand shifting sides a time or two before all is said and done.

Cleef’s presence is a strong counterpoint to Eastwood and the scenes with the two of them together are electric as a result. Gian Maria Volonte returns as the primary villain in this film as well (although naturally playing a completely different character) and the enemy here is more cunning, more ruthless, and more emotionally complex than any of the bandits and gunslingers from the last film. His character is visibly insane, but not with a mad, manic fury. Instead, Volonte plays moments of murder so coldly that we know we’re dealing with a psychopath, which makes his occasional vulnerable quivers and haunted flashbacks even more fascinating.

These combined elements elevate the entire picture: Volonte’s complex villain, Cleef’s compelling addition, and Eastwood’s stronger and more layered performance. For a Few Dollars More certainly feels very similar to its predecessor (although the plots are certainly distinct), but it is remarkably stronger and more emotionally rewarding. It was credited with presenting a different take on the bounty hunter character in western cinema (giving that job a more credible and potentially heroic spin) and with catapulting Cleef and Eastwood into stardom in America. There were vocal critics of the film who derided the attempt to basically paint murderers as heroes, but the film was wildly popular with audiences and it became an even greater financial success than the first film.

Eastwood was also at a cross-roads career wise. His prominent roles by this point had all been westerns and the fear of being type-cast was perhaps already being realized. But Eastwood’s obvious gain in experience (even simply between these two films) was fashioning a performer who could communicate as much with a squinty stare as he could with a monologue. A legendary actor was emerging, and that legacy would become nearly irrevocable by the time the third entry in this trilogy was released.

2 thoughts on “The Evolution of Eastwood: FOR A FEW DOLLARS MORE”